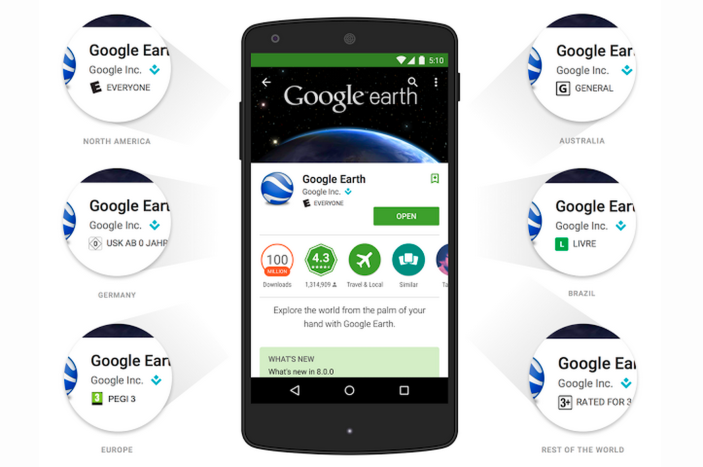 Google is rolling out two new features for Google Play today that it says will improve the experience for both users and developers. First, the company is introducing a new age-based rating system that Google noted includes considerations for the fact “different countries have different ideas about what content is appropriate for kids, teens and adults.” It’s using industry standard rating systems and requiring devs to submit information about their apps by May:

Consistent with industry best practices, this change will give developers an easy way to communicate familiar and locally relevant content ratings to their users and help improve app discovery and engagement by letting people choose content that is right for them… Google Play’s new rating system includes official ratings from the International Age Rating Coalition (IARC) and its participating bodies, including the Entertainment Software Rating Board (ESRB), Pan-European Game Information (PEGI), Australian Classification Board, Unterhaltungssoftware Selbstkontrolle (USK) and Classificação Indicativa (ClassInd). Territories not covered by a specific ratings authority will display an age-based, generic rating.

Developers will have to complete a short questionnaire related to their apps and games that Google will then use to apply a rating. Google is giving developers until May to complete the process for all of their apps or face content being blocked in some territories.

In addition to the new ratings, Google said today that it recently started using a team of humans to review apps submitted to Google Play:

This new process involves a team of experts who are responsible for identifying violations of our developer policies earlier in the app lifecycle. We value the rapid innovation and iteration that is unique to Google Play, and will continue to help developers get their products to market within a matter of hours after submission, rather than days or weeks.

Google also highlighted some other minor tweaks to Google Play that will improve the experience for developers in its blog post.