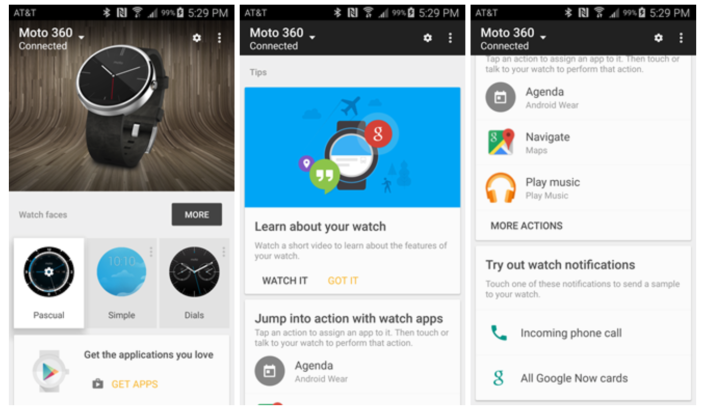 After unveiling a handful of new features for Android Wear yesterday, Google this evening has started rolling out an updated version of the Android Wear companion app. The update prepares the app for many of the features revealed by Google yesterday, including WiFi support, wrist gestures, and always-on apps.

Aside from adding the basis for those new features, today’s Android Wear app update also provides a handful of other changes and bumps the app to version 1.1. The homepage of the app has been redesigned with a card-like theme in line with Google’s other recent design trends. There’s also now a shortcut to the Play Store that takes users directly to apps designed for Android Wear.

Version 1.1 of the Android Wear app will prompt users to grant permission for cloud sync to use WiFi, as well as to allow Google Fit to use sensor data. The Settings screen of the app has also been refreshed to display both device-specifc and general settings. The former of those shows all of the options that control how your Android Wear device operates. There’s now support for multiple Android Wear devices thanks to this setting.One new feature is the ability for users to include calendar events from all signed-in accounts, not just their primary.

The update is rolling out now via the Play Store. Google said yesterday that a major update is coming to all seven Android Wear device over the coming weeks.