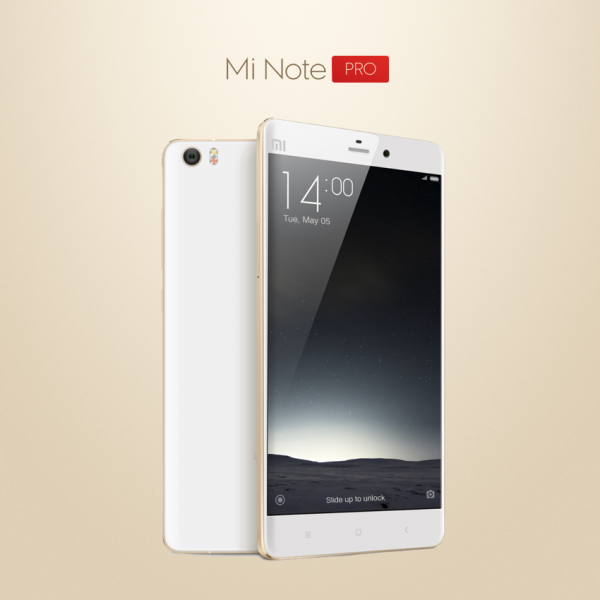 Xiaomi introduced the Mi Note back in January, and mentioned at the time that a “Pro” version of the phone would be coming at some point in the future. Today is that point in the future and Xiaomi has finally officially unveiled the behemoth of a phone that this new handset is. Alongside some new information about the phone, Xiaomi has also announced an official release date…

The phone is going to pack the heat-prone Qualcomm Snapdragon 810 64-bit 8-core CPU, with the Adreno 430 GPU (although Xiaomi says that all overheating issues have been resolved at this point, 4 GB of RAM, 64 GB of flash storage, and a huge 3090 mAh battery. All of this works together to power a huge 5.7-inch screen with a resolution of 2560 x 1440 (at 515 PPI), that Xiaomi says has new sunlight display technology for better outdoor visbility.

The phone also has what the company calls “3D” curved glass on the back, with “2.5D” curved glass on the front. You’ll also find a 13 MP main camera with built-in optical image stabilization (it’s a Sony IMX 214 CMOS, f/2.0 aperture lens), a 4 MP front camera, Quick Charge 2.0, support for LTE Cat 9 networks and more. Of course, the phone has the usual connectivity interfaces like Bluetooth, WiFi, and the like.

Xiaomi originally said that the phone was going to come in at 3299 Yuan, but today the company announced that the official launch price will be 300 Yuan lower, at 2999 (483.56 US Dollars). There’s no word yet on the phone coming to the US (as there’s no word on any Xiaomi phones coming quite yet), but you’ll be able to get it on mi.com elsewhere in the world from May 12th.