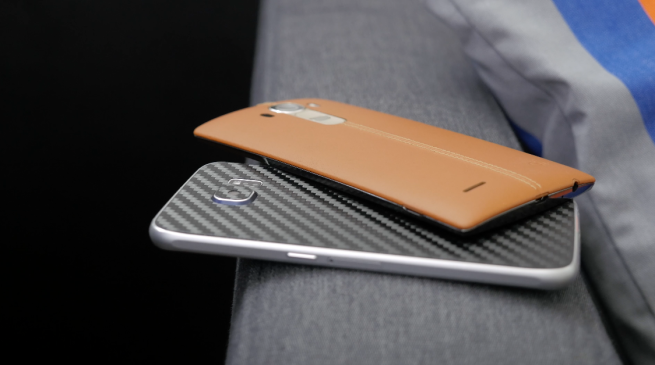 If you’re having trouble picking the best 2015 flagship Android phone to buy, let me make your choice a bit easier. Today, I’m looking at the hardware, design, specifications, software, and camera performance of the Samsung Galaxy S6 and LG G4 to see which device comes out on top…

Samsung Galaxy S6 vs LG G4: Battle of the Specs

Check out our LG G4 vs Samsung Galaxy S6 comparison video below:

When it comes to design, there’s a drastic difference between these two devices. Samsung’s Galaxy S6 uses very premium materials. This is without a doubt the best Samsung smartphone ever made. The front and back are covered with Gorilla Glass 4, while the frame is made up from metal. The all-glass design can be a little slippery at times, but that’s easily solved with a skin or case.

On one side you’ll find the lock button and nano-SIM card tray, while the other side is home to its volume buttons. There’s an IR blaster on the top, and the bottom makes room for the speaker, headphone jack, and Micro USB port. On the front side we have a beautiful 5.1-inch QHD Super AMOLED display — the best looking display on a smartphone. Samsung has done everything right with the display: the colors pop, pixels are packed, and it just looks fantastic all around. Along the top edge, there’s a 5-megapixel front-facing camera, and at the bottom we have a fingerprint sensor that’s built into the home button. Unlike previous Galaxy smartphones, this sensor works great: it’s very responsive, and there’s almost no delay when unlocking the device. To the left and right of the home button, you’ll find Samsung’s capacitive navigation buttons. Finally, on the backside, we have a 16-megapixel camera, LED flash, and a heart rate sensor that works along with the S Health app. 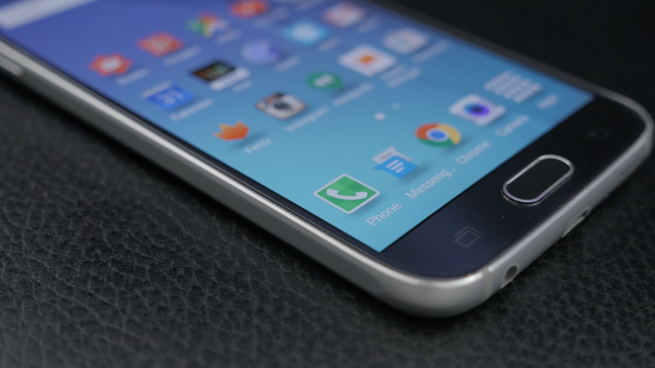 Moving along to the LG G4, things are a very simple as far as design is concerned. The G4’s body is made up from plastic, so the S6 wins in the build quality department, but the G4’s build quality is solid as well. It feels great in the hand, and there’s a slight curve to the display which adds a little bit of oomph to its design. The leather version I have is very comfortable, and detailed with real stitching up the middle that provides some grip. G4’s sides are plastic with a metallic finish that could easily be scratched if dropped, but I haven’t had an issue yet. 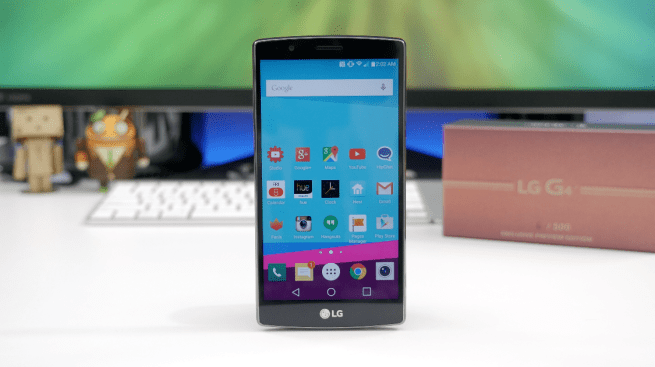 All of the buttons for the G4 are located on its back. This button layout will be familiar to those used to previous generations of the G series, but may take a little adjustment if you’re not. I tend to prefer this layout, though. There’s a small rear-facing speaker which isn’t in an ideal location, but it’s decently loud, and the top is home to an IR blaster. On the bottom side, we have the headphone jack and Micro USB port. At the top on the front side we have an 8-megapixel front-facing camera, with an LG logo at the bottom, as the G4 features on-screen navigation buttons. 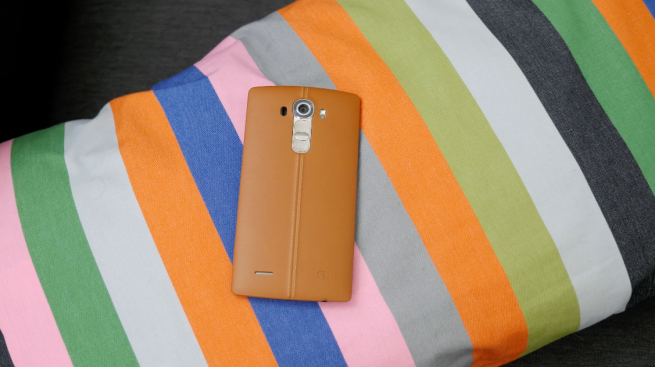 A nice feature with the G series is its removable back cover. This will allow you to easily access the Micro SIM card and SD card slot for expandable storage, as well as swap out the removable battery if you’re running low on power or the battery has issues. You can also swap out the back cover with other colors and styles that will be available from LG, and cases that offer wireless charging. Also on the backside you’ll find the G4’s 16-megapixel rear camera, LED flash, Color Spectrum sensor, and Laser Auto-Focus.

As for camera performance, I’m going to have to give the win to LG’s G4. Both of these cameras are great, but the G4 handles better in low-light situations and the color is more true to life. Along with that, the G4 manages exposure better and focuses faster overall than the S6. All of these pictures were taken in auto-mode on each camera under the same conditions, but the G4 seems to win most of the battles here. Let us know what you think about the camera quality in the comments below.

As for video performance, the G4’s improved optical image stabilization seems to be slightly more aggressive than the OIS on the Galaxy S6. Both devices provide crisp video, but the Galaxy S6 may have the upper hand in this situation. Check out the comparison video embedded above for a closer look.

On the software side of things, both devices are running Lollipop, but offer very different experiences. With the Galaxy S6, we have Samsung’s TouchWiz Android skin which is miles better than previous iterations. The interface is buttery smooth and Samsung’s internal specifications here are more than enough to handle anything you throw at it.

TouchWiz also features several customization options. First up, you can customize the grid size for the home screen which is very convenient. There are also a couple of handy multi-tasking features: first, there’s a split screen mode that will allow you to run two apps at once, which only works with specific apps, but is pretty good. Along with that, you can also launch pop-up windows that will float on top of whatever else you’re doing, and can be minimized to hide away when not in use. 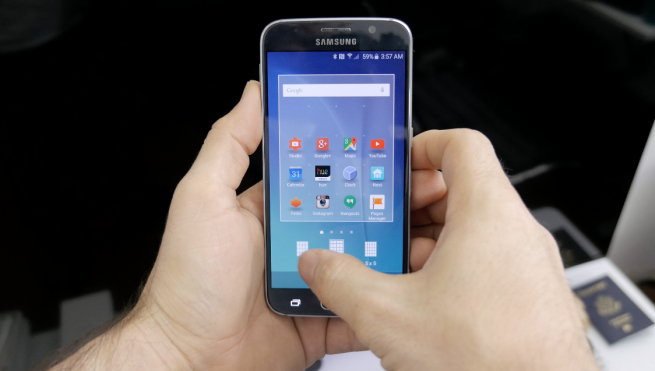 If you’re into customizing the look and feel of TouchWiz, theme capabilities are available as well. There’s a theme store that has a growing selection, and will give your device a completely different look. This time around Samsung’s TouchWiz is more customizable than ever and offers fluidity that’s comparable to other Android skins out there.

On the G4 we have LG’s UX 4.0. There’s not a lot new here to discover: most everything is a continuation of the G3 and its Lollipop release. There are Material Design elements here are there, but mostly this is LG’s creation. It’s a very smooth skin overall, and I’ve been happy with the performance here. LG’s skin features some customizations as well. There’s a small theme store available where you can download new themes and apply them, but I’m not opposed to LG’s default look. With that said, you can also change up the icons with custom images or any of the built-in icons LG offers. You also have the ability to double-tap to wake or sleep the screen, which is nice if you’re not a fan of the back lock button placement.

Like the S6, there’s a dual-window feature available that will allow you to run two apps from a small selection at once and along with that other multi-tasking features such as pop-up quick reply windows. These options and customizations are nice to have, but there aren’t many changes here when compared to the G3 running Lollipop.

Which One Should You Buy?

So which one is right for you? If you’re looking at raw material quality, the S6 is going to win across the board. There’s no doubt that it has a better enclosure when compared to the G4. That being said, the Galaxy S6 also has a more fragile build in some ways, since it’s likely that the rear glass panel could scratch or break over time. But with the fingerprint scanner, heart rate sensor, and other hardware features like wireless charging, you’re definitely getting more bang for your buck with the Galaxy S6. 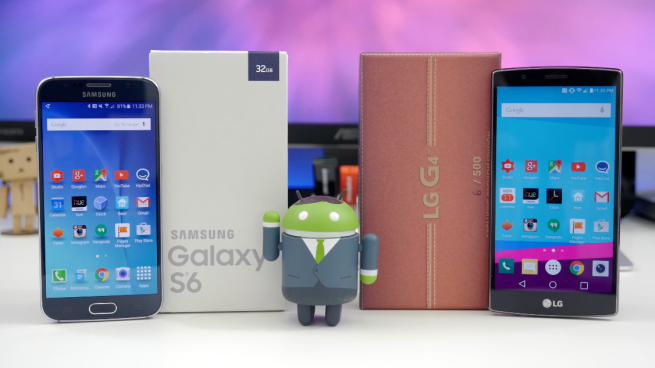 With the G4, you’re getting a larger display, a better camera, and hardware features like its removable battery. Unfortunately, the G4’s materials aren’t on the same level as the S6. This is a plastic device, but there are critical features that make it a desirable smartphone. I certainly don’t mind the larger screen, and camera quality is very important to me. So if I had to choose one at this point in time, it would be LG’s G4, because LG optimized the key points that make a difference for my user experience.