Gartner today released the results of a report on worldwide smartphone marketshare in Q1 2015 (first three months) which most notably found that Android’s hold on the smartphone OS market dropped 1.9% while Apple’s iOS saw it’s third consecutive quarter of gains. The research firm attributed Android’s loss largely to Apple’s newfound success in China – where Android saw a 4% decline over its share of that market last year –  on the back of the larger-screened iPhone 6 and 6 Plus, as well as increased differentiation and ecosystem lock-in through offerings like Apple Pay and Apple Watch.

“With the features and core capabilities of OSs evolving rapidly and becoming increasingly similar, it is now critical for OS providers to find ways to differentiate themselves,” the firm said for the report. “They need to extend their OS ecosystem’s reach by adding new functionalities, and build platforms that can span multiple devices types.”

In terms of the results of manufacturers building Android devices, it seems that Apple has closed in on Samsung’s worldwide smartphone marketshare, having sold only 20,000 less units than Samsung. One year ago, in the first quarter of 2014, Samsung had sold 40,000 more units worldwide than Apple. The Cupertino company also became the most popular smartphone vendor in China, surpassing Xiaomi to claim 72.5% of all smartphones sold in that country for the first three months of the year.

On a more positive note for the Android ecosystem, Samsung’s performance turned to growth year-on-year with an 11 percent increase in marketshare over the final three months of 2014, rather than the decline it’s been seeing more recently. Also good news is that new, smaller players including LG, Huawei, Micromax, and Xiaomi have all seen their share of the smartphone market increase over last year. 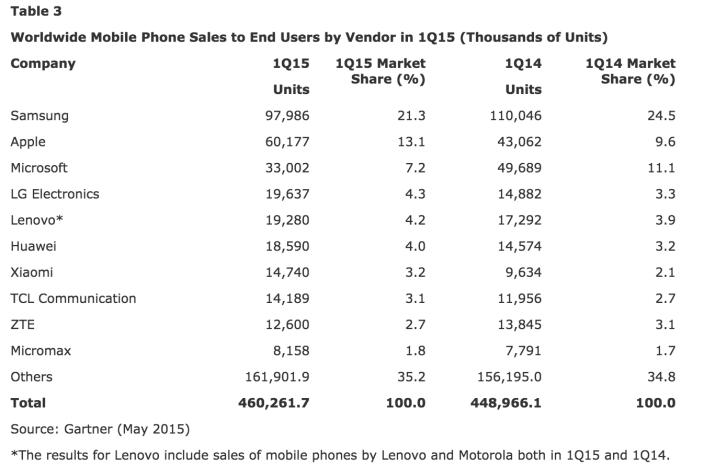 Gartner is absolutely right in its observation that the dominant competing software OSs are becoming ever more in feature-parody with one another – it’s no longer really the truth that Android is more buggy or harder to use than iOS, and iOS has gained many of the features that led people to initially buy Android smartphones. But today what Apple has that not any one company in the Android ecosystem does to the same extent is a tremendously strong catalyst in the long sought-after iPhone, a status item in places like China, for sales of other Apple devices which in-turn lock consumers into their ecosystem. And when you buy into the Apple ecosystem, you’re buying into an ecosystem that gets better and better every single year.

Personally, despite Apple’s gain over Xiaomi in China, I still think the Chinese company is the best bet here in terms of building out the ecosystem to challenge Apple. They’ve become a serious player in emerging markets appealing to youth by following the principles they care about – openness, transparency, authenticity – and the demographic they’re going after in China is for the first time in need of household items (partly because they’re growing up, but also because of China’s booming economy allowing for increased upward mobility) that the company can and has begun to sell under its brand through products it builds itself and ones it licenses out under its name.

It will be interesting to see how these things play out, but right now this new data combined with Google’s inability to monetize Google search on Android nearly as well as on iOS makes for a dominant marketshare that’s looking weaker by the day.