Google Photos was just announced this week, and—assuming you’re okay with Google having all of your photos on their servers—it’s a great new way to keep all of your life moments safely stored in one place. This isn’t just a redesigned mobile app. It’s a complete rethinking of how Google approaches its photo storage offerings, and it already has me convinced to just throw every picture I’ve ever taken to their cloud…

The new app is great, and it definitely brings a bunch of new user-facing features. Google has highlighted that you can pinch-to-zoom in your photo gallery (notably much like the iOS Photos app), you can more quickly select groups of photos, you can navigate through the different sections of the app easily, and you can find what you’re looking for faster than ever thanks to some clever new image recognition technology Google has implemented in the background.

After the keynote, Google gave the press a a deeper look at all of the features of the app, and it’s actually a lot more powerful than it might seem at first. It’s not just a Dropbox competitor, and it’s not just an expansion of what previously was Google+ photos. In fact, Google’s Bradley Horowitz says that they’re taking a fresh look at what Google+ is and what it should be. They’ve brought on some new blood, and that Google+ is moving in new directions.

Google+ will be changing. I’ve said that and I want to give some color around that. Google+ has an excellent team behind it and theres some new blood on the team that have been brought in, and there’s some folks that have been on the team for a while. But there’s a renaissance in the thinking about what Google+ is and what it’s for. To put it in a nutshell, we found that Google+ is working incredibly well at connecting people around shared passions and interests.

Google+ is changing, and Google is really digging into what makes the service great. Communities are the hit social feature of Google+, and—obviously—the photos capabilities of Google+ are also a hit. For some time now, Google has been planning to start breaking these, along with Hangouts, into three different products. And the first big step in that direction is the announcement of Google Photos at I/O.

The Mountain View company is taking a very bold approach with Photos, and in some ways, Google says, the app is very comparable to Gmail. It’s Google’s attempt at making management of your thousands of photos easy. It’s taking something that seems daunting—organizing all of your thousands of life moments—and breaking away all of the potential pain points. And the company is doing this in many different ways.

Along with storing all of your photos in the cloud (for free, with unlimited storage), Google is introducing a lot of new features with Google Photos. The iOS and Android apps got their overhauls, which is great, but—like I said—this is more than an app update. Google is also introducing a brand new web interface, easy ways to share your photos, smart groups of photos based on meta data and new analyzation technology, a the new Photos Assistant (previously known as Auto Awesome), and a ton more. 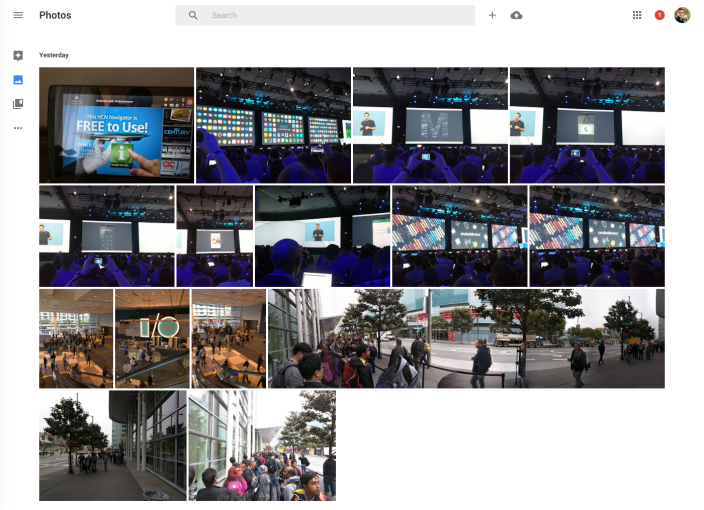 The web interface is nice and clean, and based on our experience, it works a lot like the mobile apps. And with unlimited storage at quality that is indistinguishable to the human eye (according to Google, and backed up by our own experience), I have a hard time feeling like I will ever need to store my photos anywhere else. There are privacy concerns, which are valid, but the new organization, search, and auto-backup features make Photos almost irresistible.

Our own Jeremy Horowitz over at 9to5Mac even says that Google may have just won his photo library from Apple, and I can’t agree more. I come from a different perspective, though. I’ve never stored my photos in the cloud, because there has never been a solution that was easy and convenient enough for me to want to. With Google Photos, the Mountain View company is even introducing an app for the desktop that automatically uploads all photos from approved connected SD cards and devices. There’s not even a dialog box.

Concerns that Google is going to use these photos improperly or try to monetize the data they get from them later (which they might) aside, I have to say that Google has done a great job of convincing me that I need Google Photos. And I think I’ going to start using it now. And that’s coming from someone who has always been frustrated at how hard it is to organize photos on Android (considering app fragmentation and other problems).