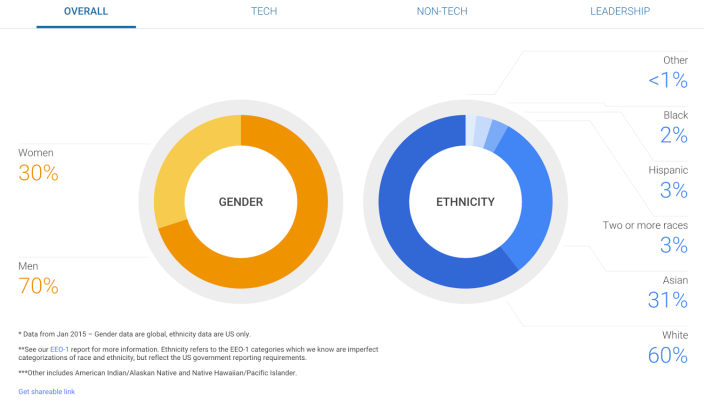 More than a year ago, Google became one of the first tech companies to share data on the diversity of its workforce, and now it has released an updated version of the data. In a post on Google+, the company revealed some of the changes that it has made to improve diversity and the results of those changes. Last month, Google revealed plans to spend more than $150 million on diversity initiatives over the next year.

Today, Google revealed that 21 percent of the tech hires it has made over the last year have been women. The company also notes that the overall number of women in technical roles went up by 1 percent. 22 percent of software engineers hired through its campus outreach over the past year were women. Google attributes its increase in the hiring of women to a variety of factors, including the Anita Borg Scholarships, in which it has invested more than $3 million. Google also points out that 23 percent of Google I/O 2015 attendees were women, up from 20 percent in 2014 and 8 percent in 2013.

Next, Google says that the increase in Black and Hispanic Googlers outpaced Google’s hiring growth overall, but their percentages are still not where they need to be. Blacks make up just 2 percent of the company, while Hispanics make up 3 percent. Google says it is working diligently to grow those numbers, however, by doubling the number of universities it recruits from and deepening partnerships with Historically Black Colleges and Universities.