Partly-owned-by-Nintendo The Pokémon Company has today launched its very first Android app on the Play Store, called Pokémon Jukebox. As you might expect, this isn’t one the five actual game titles that we should expect to see from Nintendo before March 2017, but it is an official offering from The Pokemon Company and it’s available right now. With Pokémon Jukebox, you can play hundreds of sounds from a huge catalog of Pokémon games. But sadly, while the app itself is free, actually using Jukebox is far from cheap…

When you open the app, you’re presented with a bunch of different sections. The main section, called “Special,” allows you to “listen to 3 songs as much as you want each day for free!” The others are pretty self-explanatory. If you head over to the “Shop” page, you’ll be asked to pay for Pokémon-themed music in the form of single songs for $1 a piece, or “Melodies,” which come in at $2. You can organize your music into playlists, and play back your purchases on the “Music” screen.

More than anything, it looks like Nintendo is trying to cash in on nostalgia and an opportunity to re-sell its many 8-bit tunes on its own terms. You can find tracks from the oldest titles like Pokémon Red and Pokémon Blue, as well as some from the most recent games for Nintendo 3DS like Pokémon X and Pokémon Y. Oh, and if you want to just play the songs on loop — over and over, just like the games — there’s a feature for that too. Maybe that $1 40-second song purchase isn’t too bad after all.

We can’t fully put the blame on Nintendo, though, as The Pokémon Company, while partly owned by and affiliated with Nintendo, is only in charge of marketing and licensing the Pokémon franchise. That means that the team that pushes out the Nintendo 3DS and its actual Pokémon games is likely very far in distance from the group that made this app, and this offering shouldn’t necessarily be representative of what we should see from Nintendo in terms of full games later this year.

Hundreds of complaints are already spilling into the Play Store about the app, claiming that it has a clunky and glitchy interface and that you would have to spend tens of dollars before actually being able to use the proprietary music player. Additionally, The Pokémon Company says that some devices are just simply not supported, including the 2012 Nexus 7 and others. Not that this is surprising for Nintendo, but the app is completely locked down (for now at least). You can’t listen to your purchases anywhere but within the app’s reportedly bad user interface. I can confirm first-hand that the app is bad; I gave it a try and deleted it immediately. 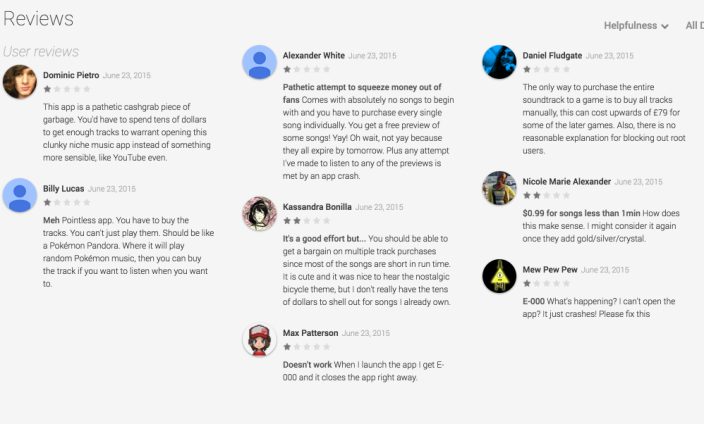