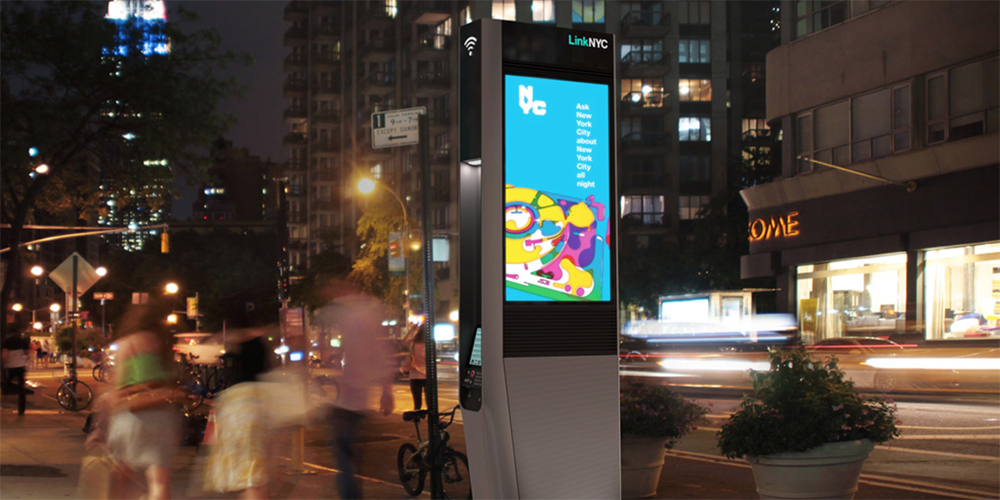 When Google CEO Larry Page announced the formation of a new division, Sidewalk Labs, to “improve city life for residents, businesses and governments,” it was all a bit vague. The company has now got rather more specific, stating that its vision is to bring free, high-speed wifi to every city street worldwide – and that New York is first in line.

[We will] make cities connected places where you can walk down any street and access free ultra high-speed Wi-Fi, find transit and wayfinding information, access information about city services

To kick things off, Sidewalk Labs has acquired the two companies behind LinkNYC, and is partnering with Qualcomm and Comark to turn up to 10,000 phone booths into communications hubs offering free gigabit WiFi across New York City …

The project will be funded by advertising screens on the booths.

The company says that it can’t yet say when the program will roll out to other cities as that will depend on how local governments respond to the idea. NYC makes the ideal place to launch as “what happens here is seen everywhere.”

The full press release can be read below.

New company aims to bring new model for connectivity, municipal services and civic engagement to cities around the world. Control Group and Titan, key members of the team behind LinkNYC, announced today that they will merge and be acquired by a consortium of investors led by Sidewalk Labs.

The new company, named Intersection, combines both companies’ expertise in technology and innovation at the convergence of the digital and physical worlds. LinkNYC, their groundbreaking project in New York City with partners Qualcomm and Comark, will create up to 10,000 communications hubs that provide city residents and visitors with free public gigabit Wi-Fi, access to communications, information and municipal services across the city. Intersection will aim to extend the thinking and approach behind LinkNYC into an array of solutions to help make cities around the world more livable and connected.

Sidewalk CEO Dan Doctoroff will serve as the Chairman of Intersection. Doctoroff said: “By bringing these two industry leaders together, Intersection will help make cities connected places where you can walk down any street and access free ultra high-speed Wi-Fi, find transit and wayfinding information, access information about city services — the possibilities are endless. Titan brings deep understanding partnering with governments and transit authorities, while Control Group has unparalleled expertise in creating digital products and experiences for the physical world. With LinkNYC, Control Group and Titan have shown that by integrating new technologies into existing infrastructure cities can reinvent these assets – providing not just more modern, free services to citizens but even more revenue to cities. As Sidewalk Labs works to scale technology solutions for cities around the world, this is just the first of many urban challenges we will be tackling.”

Control Group is known for its leading-edge public interfaces in mass transit, airports, cultural institutions and retail. Colin O’Donnell, a founding partner of Control Group, said: “The combination of technology and media has always driven innovation on the web. With Intersection, we’re excited to bring the same principles to cities and public spaces to drive civic innovation and create more connected, responsive and vibrant places to live.”

Titan has a significant out-of-home advertising business that generates revenue for cities and municipal authorities, and has operated the New York City public phone booths now being converted under LinkNYC. Don Allman, CEO of Titan, said: “Intersection will allow us to play a pivotal role in helping cities and municipal authorities deliver improved city services and a better customer experience.”

The companies will combine New York City offices to encourage a collaborative environment. Senior management teams from both Titan and Control Group will remain at Intersection. Control Group and Titan will continue to provide their world-class roster of clients with excellent service – across digital strategy, technology, design and out-of-home advertising. Intersection will also provide current and future clients with new urban experience and information products and services that build on the strengths of both companies to create value for citizens, brands and governments and to improve life in cities around the world.

Intersection is an urban experience company that combines expertise in technology, user experience and interactive engagement at the convergence of digital and physical worlds to improve life in cities around the world. Intersection is the result of a merger between Control Group and Titan, key members of the team behind LinkNYC, the groundbreaking project to turn payphones into urban information hubs. It is owned by a consortium of investors including Sidewalk Labs.

Sidewalk Labs is an urban innovation company launched by Dan Doctoroff and Google devoted to improving city life for residents, businesses and city governments, in particular by developing and incubating civic technologies.