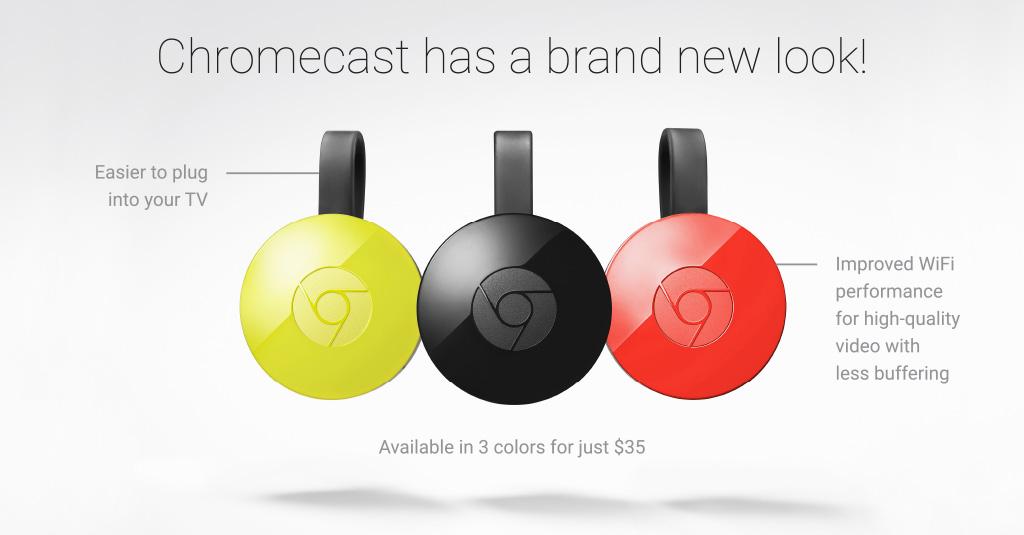 Google has today announced its 2nd generation Chromecast. Along with a completely new form-factor and design, the device offers improved WiFi and connectivity features, new “feeds” for displaying content on-screen while your device is in standby, and “Fast Play,” which allows your devices to connect to Chromecast faster and easier than ever before…

First up is the new Chromecast hardware itself, which you can see above. As we exclusively reported, the device is definitely a marginal departure from the original model. It’s still a dongle, but Google has decided to go with a design that looks to resemble the Chromecast logo itself. Additionally, unlike the original, the second generation Chromecast will come in three different colors: yellow (lemonade) , black, and red (coral).

Additionally, Google has improved the device’s connectivity and WiFi features, making sure that your Chromecast can stream high-quality content without a hitch. Besides support for the faster 802.11ac and dual-band 2.4 and 5 GHz support, the new Chromecast also intelligently chooses the best WiFi bands to use for the highest-quality stream. The original Chromecast only supported 802.11b/g/n.

Finally, the new Chromecast supports something called “Fast Play”. This, along with the improved WiFi features, allows your Chromecast to establish a connection much quicker and play content more seamlessly when pressing the “Cast” button on a connected device. This is one area many users find frustrating with the current Chromecast, and if Google has made the experience anything close to this, Fast Play might be the device’s most compelling feature.

Google says that the 2nd gen Chromecast is coming today to 17 countries for $35. You’ll be able to grab one from the Google Store, Best Buy, and Walmart.