Verizon and Motorola have today announced both the Droid Turbo 2 and the Droid Maxx 2, a pair of smartphones that give Verizon customers some really great flagship and sub-flagship options. The big announcement here is the shatterproof screen coming exclusively to the higher-end Droid Turbo 2, but that reveal is coupled with the announcement of a mid-range, all-around good phone, the Maxx 2. Here’s everything we know…

The Droid Turbo 2 is clearly the reason today’s event happened, as the companies made a big deal out of its multi-layered shatterproof screen. But on top of just being more durable than its competitors, the Turbo 2 also sports the better specs of today’s reveals. The device has a lightweight design with a Snapdragon 810 system-on-a-chip from Qualcomm, a 5.4-inch QHD display, and a couple of great 21-megapixel and 5-megapixel cameras (although those are pretty standard for 2015).

Motorola says that the Maxx 2 is aimed at the customer who cares more about the fundamentals. It’s cheaper, and its specifications reflect that, but it’s probably the right option for a large percentage of consumers. The phone has a 5.5-inch full HD display, a two-day 3630 mAh battery, and a micro SD slot for expanding the phone’s storage. The phone has a Snapdragon 615 processor, a 21-megapixel camera, and 2 GB of RAM.

Both devices will be available in all Verizon Wireless stores and on Verizon’s website on Thursday of this week. And to kick-off the launch of the Turbo 2, the carrier is offering a special trade-in offer that can provide consumers with up to $300 (but probably less for most phones) off the Turbo 2 when they trade in an old phone. Interestingly, Verizon says that it’s accepting phones with cracked screens, since you’re replacing them with a much sturdier handset with a shatterproof screen. 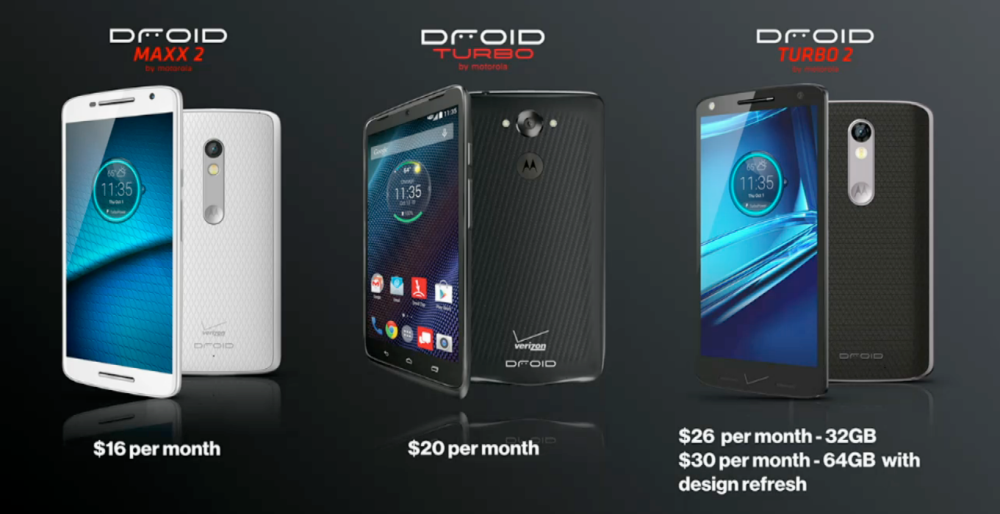