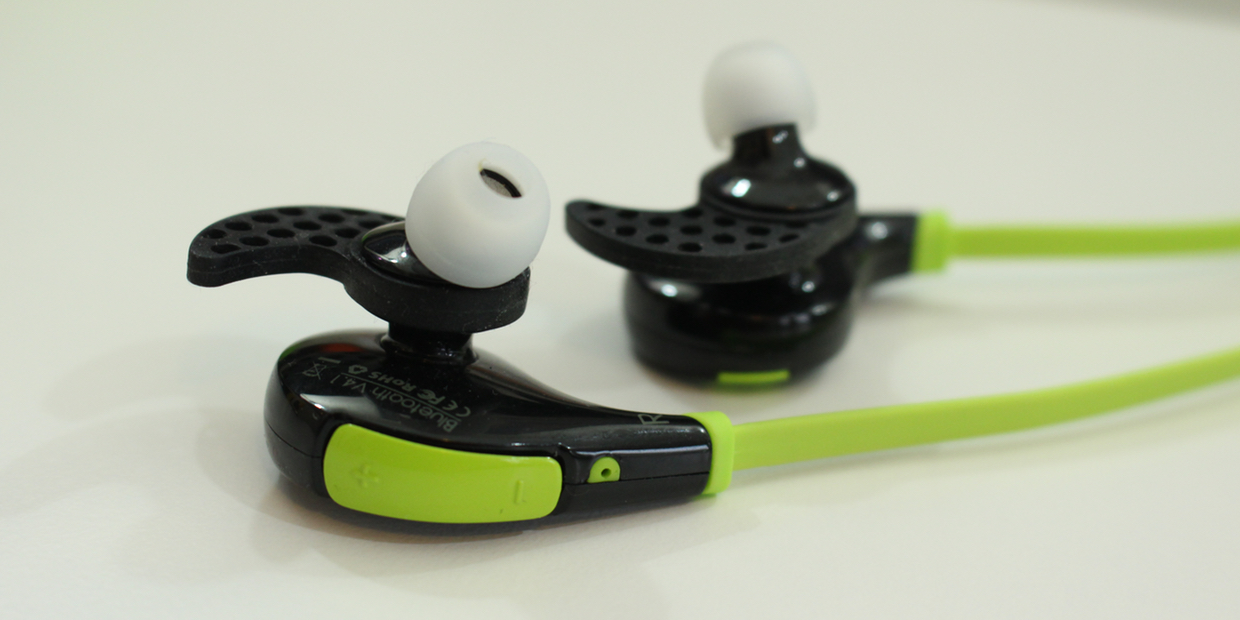 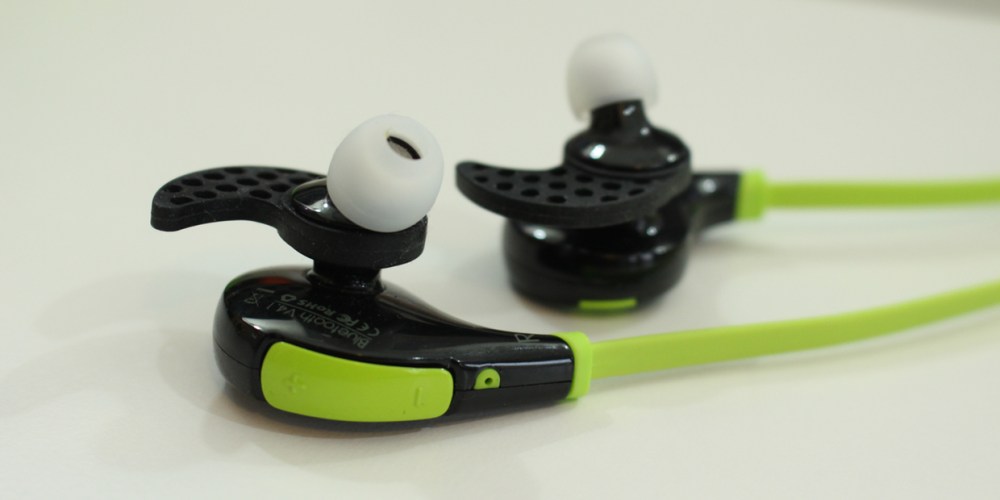 Aukey is a Chinese company more commonly known for producing charging accessories like in-car chargers and multi-port USB stations. But, it also builds headphones. I’ve been testing the wireless Bluetooth earphones while out running for a few months now. For $25, it’s really hard to argue against the Aukey Sport Bluetooth Headphone…

It’s important to note, for me, buying wireless earphones was about fitting a couple of specific needs. I use on-ear and over-ear headphones for regular daily listening, so I didn’t need something for every day. I needed a wireless pair for when I went running. It had to be wireless because I hate the feel of the audio cable tugging on my ear when jogging up and down, it also had to be cheap. I wasn’t going to go spending $100+ on a pair of headphones that would only be used 2-3 times per week for 30 mins at a time. They also had to stay in my ears, or they’d be completely useless. Audio quality wasn’t such a big deal since the music would be mixed with the sound of me panting, and my exercising app barking orders at me.

The Aukey Bluetooth headphone ships in a minimal, brown cardboard box and comes with a number of useful extras. There’s a pouch for stowing the earphones when not in use, 3 pairs of ear buds in small, medium or large, plus several different types and sizes of ear hooks. There’s also a small USB to Micro USB cable for charging and — of course — the earphones themselves. 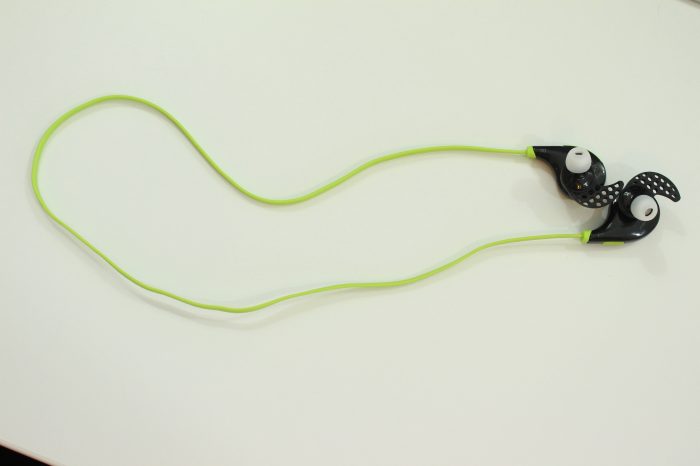 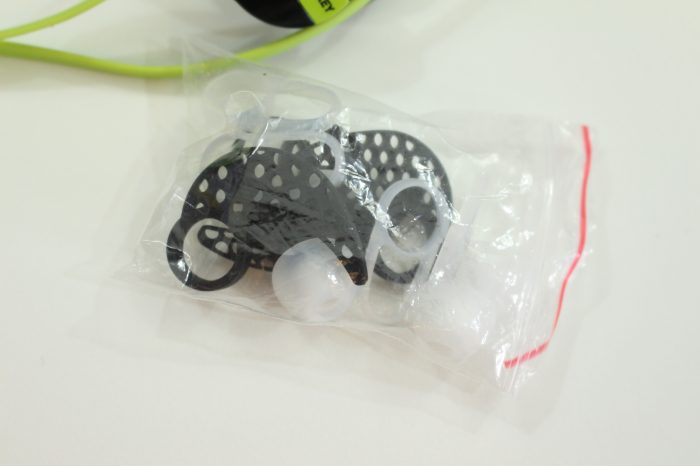 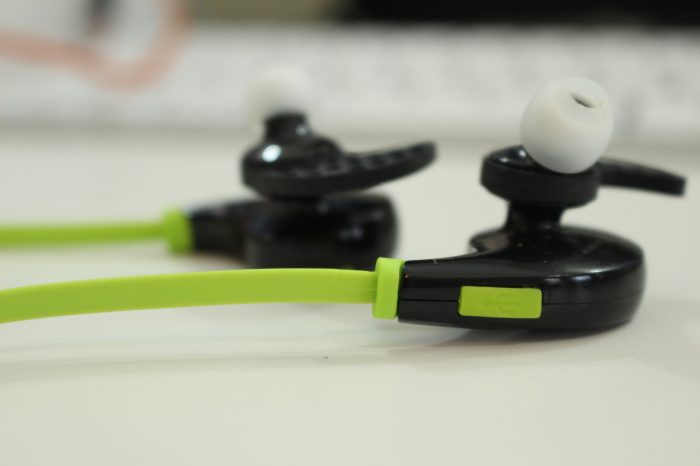 With the included equipment you can swap out ear buds until you find the ones that best fit inside your ears, and swap out ear hooks until you find the ones that keep the earphones in your ears. In my experience, it took about 3-4 runs with different combinations to find the best solution for me, but once I found it, I was more than happy with the fit. In the end, I settled with a pair of small earbuds and a pair of shark fin-like hooks. I found the bigger earbuds would slip out of my ears constantly during a run, the small ones stayed snug and tight.

Trying to beat a time on my 4K run, sweating, my asthmatic lungs panting and a right ear bud that kept slipping out made for a pretty angry runner with the wrong fit. If it wasn’t for my planned review, I would have thrown them into a river. But I’m glad I stuck with them until I found the right bud/hook pairing. Once I did, the earphones stayed in my ears consistently and didn’t fall out once — that’s no exaggeration. Even with the slightly bulky plastic casing, they were light enough that they didn’t even feel like they’d dislodge themselves from my ears.

Design-wise, the earphones are pretty unremarkable. That’s to say, you get exactly what you think you’d get for $25. All the components sit inside an upside-down tear-shaped plastic housing, with Aukey’s brand name stamped on to a small, neon-colored plastic panel on the side. They don’t feel particularly well made, as they’re very plasticky, but again, you expect that for the money. They’re pretty much exactly what I thought they’d be. 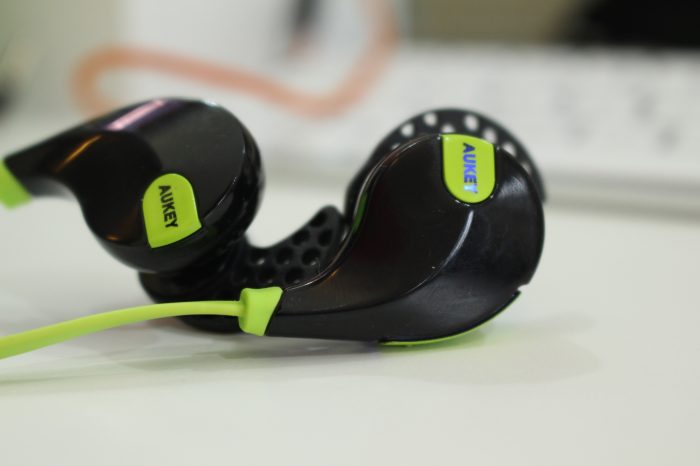 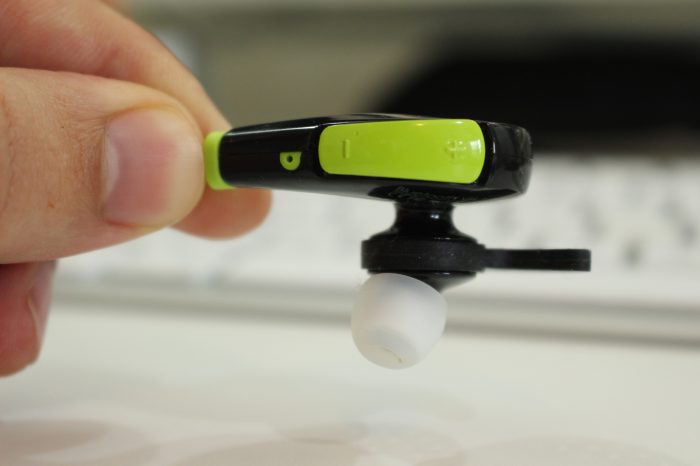 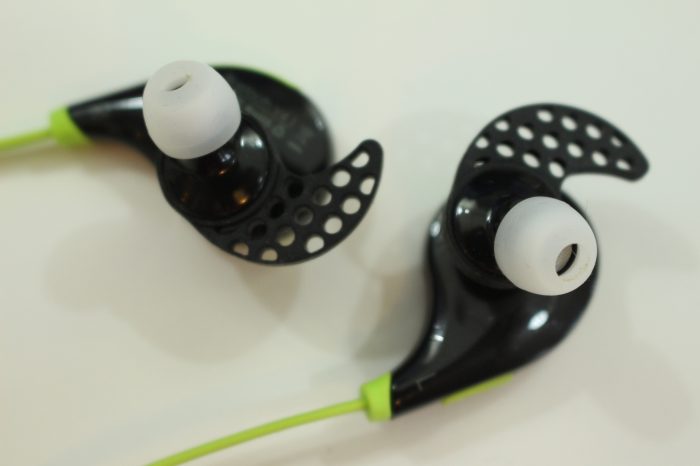 On the right earphone, Aukey’s managed to squeeze in the power/pairing button as well as a volume up/down rocker made from a more rubbery material and a microphone for making handsfree calls. To say they’re fiddly to use would be an understatement. I found my fingers tripping over the volume buttons, or my thumb accidentally pressing the power button quite often. I found it far easier just adjust the audio level on my phone rather than fiddling with an earphone. Saying that, once connected, I was pretty impressed by the sound. They were clear, and listening while running was good enough. Vocal tones came through well.

Once more, my praise of the audio comes with the caveat: these earphones are cheap, and they’re not for audiophiles. But audiophiles know that already, they’d likely not dream of spending less than $100 on a pair of earphones, especially not wireless ones. As far as sound quality goes, I was pretty pleased. The bass wasn’t so overpowering that it killed the middle and treble tones, likewise, it wasn’t too wooly. Treble levels were at a decent enough level, although the overall sound was lacking a little in clarity.

I’m not an in-ear headphone kinda person; when I’m listening to audio casually, I like to feel enveloped by sound. I also really don’t like having things inserted in my ears. But, for exercising, on-ear or over-ear headphones aren’t the most practical solution. They also look a bit silly. So, to have a cheap pair of wireless earphones I could rely on to deliver music and ‘motivation’ from my running app was valuable. I didn’t want a pair that cost a fortune, since I’d only use them when running. Likewise, I didn’t want a pair that was so terrible I’d hate even running with them. The Aukey set perfectly fit my budget and feature requirements.

You can buy the earphones from Amazon for just $25, and you’ll almost certainly not regret spending that little on a pair, as long as you manage your expectations. They’re no JayBirds, but they’re perfectly acceptable for the price. At time of writing, you can even get $10.00 off using code SS38IIUM at checkout.