We’ve seen Google Cardboard and other virtual reality solutions put to use in a variety of situations thus far, and now President Obama has gotten to experience the technology for the first time. As detailed by Inverse, Obama was in Hannover, Germany recently touring a technology trade show and had the opportunity to try out a virtual reality headset made by PMD paired with a Galaxy S7 and an “external 3D camera to provide both digital immersion and reality alteration.”

The report details how Obama spent a decent amount of time simply looking at his own hand through the camera while using an app that identified individual fingers and highlighted them. Obama was touring the trade show with German Chancellor Angela Merkel and when it was her turn to try the headset, Obama took her hand and showed her the app worked.

Obama seems to have particularly enjoyed the augmented reality features of the goggles: he spent a good while ogling his own hand through the camera, experiencing a program that identifies individual fingers and marks them with color highlights

President Obama has long been a supporter of technology innovation and investment, so it’s a little surprising that this was his first time trying virtual reality. Nevertheless, we can’t wait to see his reaction when he tries more sophisticated use cases than an app that identifies his fingers.

Earlier this year we saw Obama totally geek out at the White House’s annual science fair, so his interest in technology and innovation seems to run pretty deep. Even if he hasn’t yet experienced the true potential of virtual reality yet. 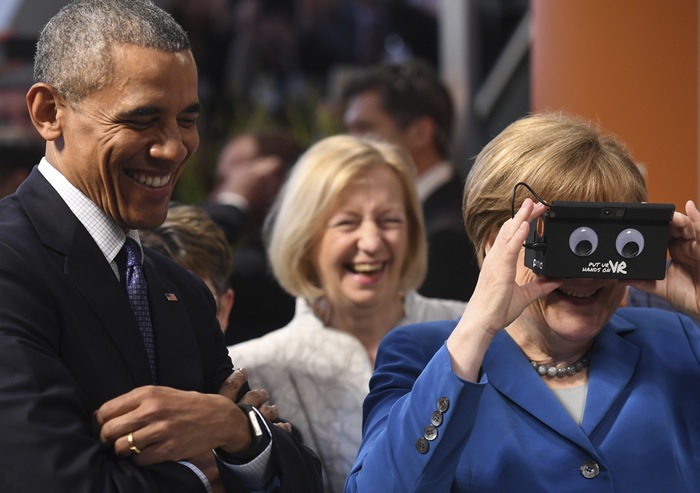