Offline video is one of the main benefits of a YouTube Red subscription. In developing countries, downloads are actually available for free as a means to work around connectivity issues. Now YouTube is rolling out a new Smart Offline feature in India that downloads videos during late night hours when carriers offer discounted data.

In India, many carriers offer discounted data and promotions to subscribers during non peak hours. Smart Offline allows users to queue up videos until the cheaper data pricing comes into effect without having to stay up to initiate the download manually.

On the latest version of the YouTube app, tapping the download button will bring up a prompt letting people ‘Save overnight’ or download immediately. In the morning, users will find all their saved videos ready to watch with the same restriction periods. Smart Offline only works on a cellular connection and not over Wi-Fi.

The feature is gradually rolling out to Airtel and Telenor subscribers starting today and Google hopes to expand the feature to all users and carriers in India. Presumably, the feature will also expand to other developing nations with similar connectivity plans.

Other Google initiative in the country involves providing Wi-Fi at the largest rail stations in the country, adding data saver features to apps, and rolling out offline maps. The two latter features have conveniently made their way to users around the world. 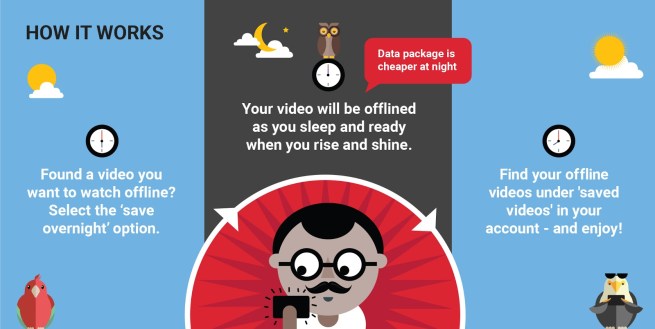