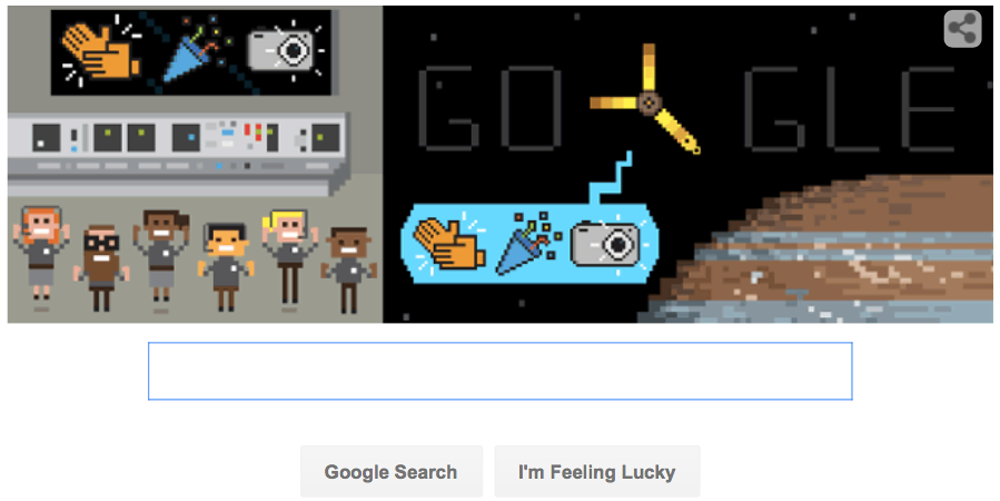 When you need a spacecraft to fire its rocket for 35 minutes some five years after it left Earth, there has to be an anxious moment or two wondering whether it will work – all the more so when it’s been subjected to a radiation dose equivalent to a million dental x-rays. But NASA’s Juno probe performed perfectly, and Google is celebrating the fact with an animated Doodle …

The deliberately low-res animation shows the control center team jumping and cheering as the satellite sends a message featuring applause, a glass of champagne and a camera.

As CNET notes, you could get to choose what Juno photographs as it completes its planned 37 orbits of the gas giant Jupiter.

For the first time, NASA is handing the camera over to the public to take part in some very cool citizen science. As part of the mission, members of the public will be able to choose points of interest for the spacecraft’s JunoCam to capture in colour photos, before getting a chance to process them and share them online.

Juno is presently in an orbit taking 53 days to complete, during which it will take photos. A second rocket burn in October will then decelerate it further to place it into a much tighter 14-day orbit to use eight remote sensing instruments to gather scientific data.

Among the questions NASA hopes Juno will answer is whether Jupiter has a solid core, or is pure gas. Once its mission is complete, it will be deliberately crashed into Jupiter, reports the BBC.

In line with the practice on many previous planetary missions, the probe will be commanded to end its days by ditching into the atmosphere of Jupiter. This ensures there is no possibility of Juno crashing into and contaminating the gas giant’s large moons, at least one of which, Europa, is considered to have the potential to host microbial life.