IFA 2016 is inching nearer (in fact I’ll be on a plane in just about an hour to head to Berlin), and now Evan Blass is back again with another leak leading up to the convention. This time, he says that there are three devices set for Huawei’s press conference this week: Nova, Nova Plus, and MediaPad M3…

We don’t know much about any of these devices, but remember that purported Nexus 6P lookalike Mate S2? One appropriately-named Huawei Blog suggests that that device could actually be the Huawei Nova. The “Plus” version is probably just one with some slight spec differences and a bigger screen.

The site also shared a purported image of the Nova from Weibo, via Chinese analyst Xiang Ligang. That now-deleted post also suggests that the phone will be targeted at women in some way, roughly translated:

Huawei to a special female brand mobile phones, on Nova, Nova, IFA exhibition, the phone will first meet with you. 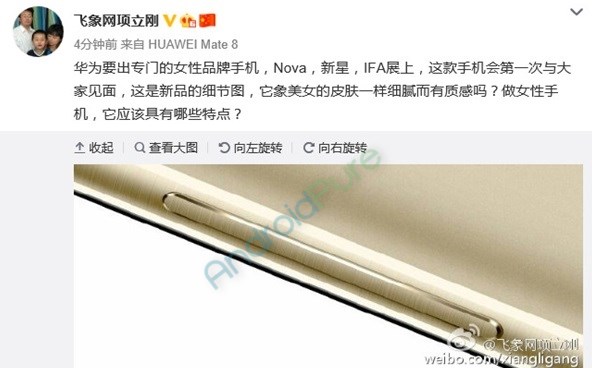 Huawei’s event is scheduled for 10:30 AM Berlin time on Thursday September 1st, and we’ll be on the ground to keep you in the loop.

Huawei Nova, Nova Plus, and MediaPad M3 launching at IFA.