A press conference held earlier today by the Slovakian branch of Sony‘s mobile division gives us a quick peek at the company’s roadmap for Xperia line’s Android Nougat update. With such a copious lineup there’s a good number of different devices to go through, so let’s winnow them together after the jump…

As is to be expected, the firm’s top devices are the first ones pegged to receive the latest version of Google‘s OS, with the recently-announced Xperia XZ and the other higher-end model, the Xperia X Performance, targeted for an October 2016 release.

The second update timing slot is reserved to the “standard” Xperia X and its smaller X Compact brother, instead, roughly a month after the initial rollout for the flagship models.

The Z5 series is then queued — that is, Xperia Z5, Xperia Z5 Compact and the 4K display-equipped Xperia Z5 Premium — alongside the Xperia Z3+ and the Xperia Z4 Tablet, which should see Android’s latest treat around December.

On to 2017, the fourth — and ostensibly last — update wave is reserved to the Xperia XA and the larger sibling, the XA Ultra, which should be updated some time before the end of Q1.

The original report from XperiaBlog also reminds us that, other than the ones above, there were no devices even mentioned, which means chances are that other Xperia phones from last year (such as the Xperia M4 Aqua, M5, C4 and C5 Ultra) may not see the update at all.

We wouldn’t be surprised to see new handsets from the company being launched some time around next year’s CES — or at least announced, as per the company’s custom — with Nougat onboard, whether part of the “old” Z series or the relatively new “X” one. We will keep you updated as we learn more. 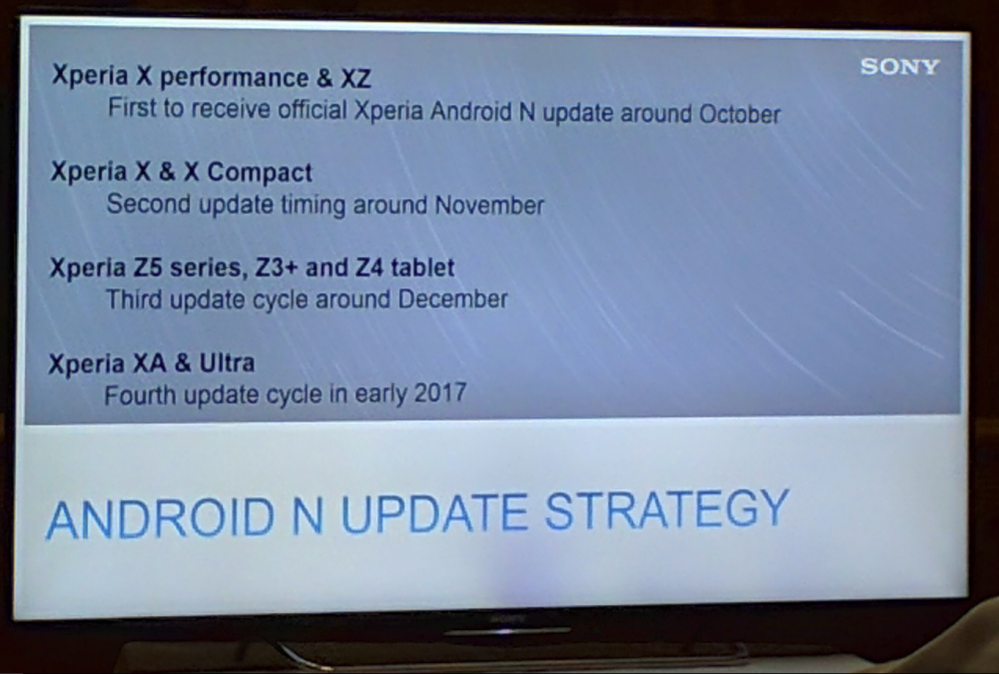