Nougat debuts at a measly 0.3% in November’s Android distribution numbers

For some reason, Google didn’t post Android distribution numbers last month. Now updated for November, however, Nougat finally enters the fray. Marshmallow, meanwhile, sees a decent jump to nearly a quarter of all devices — despite there being a huge share of KitKat and Lollipop devices still in the wild…

Released in August to Nexus and the Pixel C, Android 7.0 comes on the scene with 0.3% adoption. For comparison, Marshmallow also debuted at the same percentage a year ago this month. With a higher API level, Android 7.1 on the Pixel, Pixel XL, and Developer Preview devices have yet to register as Google does not list any version with less than 0.1% distribution.

It took Marshmallow until February to reach 1%, but hopefully Nougat will fare much better due to an early developer preview this year. Samsung appears to be preparing for an Android 7.0 beta program for the Galaxy S7 Edge, while Huawei is already out with its EMUI 5.0 for the Huawei Mate 9. Motorola is slated to deliver Nougat to the latest Moto Z and G4 by Q4.

From two months ago, Marshmallow rose 5.3 percentage points to 24%. Unfortunately, Lollipop and KitKat are collectively higher at 34.1% and 25.2%, respectively. As such, Android 5.0 and 5.1 are still the most used version of the operating system, only falling .9 points.

Meanwhile, Jelly Bean is at 13.7%, Ice Cream Sandwich 1.3%, and Gingerbread 1.3%. Froyo stubbornly persists at .1%. These numbers are compiled from Android devices that accessed the Play Store in a seven-day period ending on November 7. 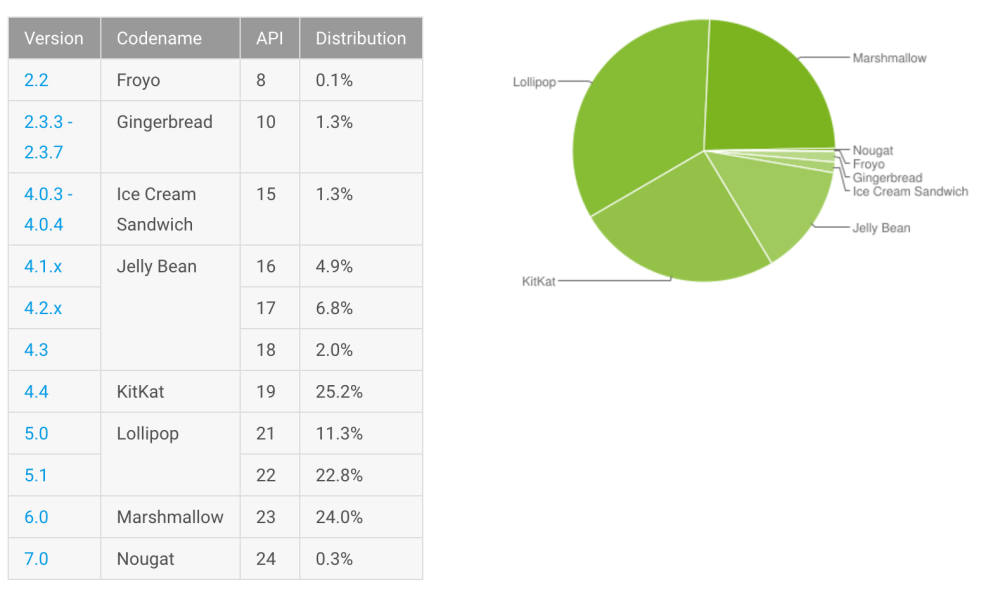