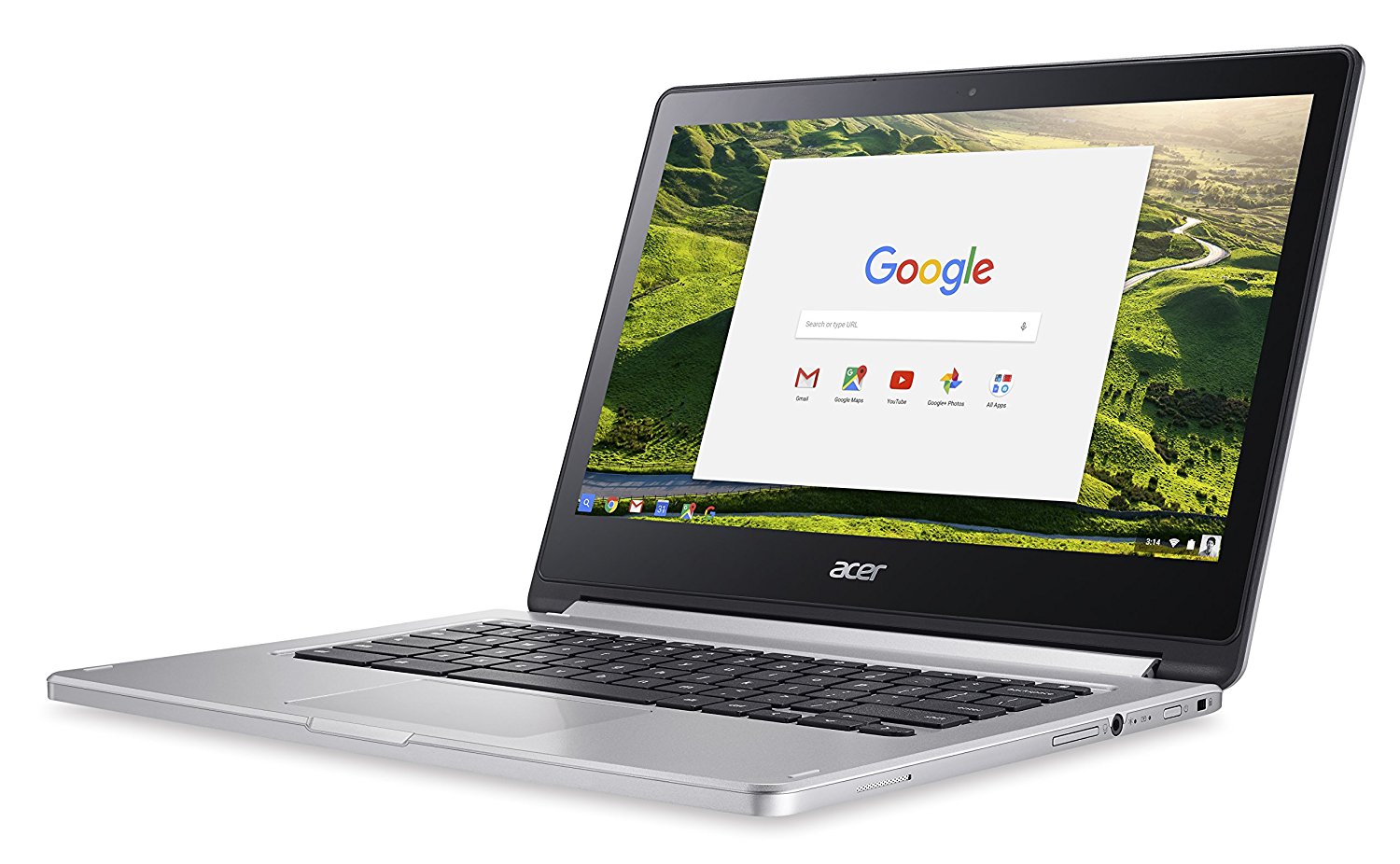 I was as pleasantly shocked as many people at Google I/O earlier this year when the company announced that Chromebooks would begin to offer Android apps via software update. In my mind, this is a real game changer, bringing Chrome OS into the mainstream desktop OS market with macOS and Windows.

The future became now as earlier this month, the already impressive Acer R13 Dev channel got the Google Play store. But let me back up a second. First you really need to hear about the hardware specs of the Acer Chromebook R13 which make it seem almost like a Pixel-type of device, if not better…

Acer’s not typically known in the Chrome OS world as delivering the high-end goodies on their Chromebooks. In fact, when people ask me what’s the lowest price on any usable laptop, I often point them to the refurbished Acer Store on Amazon and eBay to pick up a 12-inch plastic Chromebook with a 720P display and 2GB of RAM for $100-200. These are usually very utilitarian machines with basic specs great for part time use by kids or grandparents or as a second screen.

The R13 is in another world. It is a very premium glass and aluminum/metal (with some plastic) laptop that looks and feels a lot like more like a $1000 laptop than its $400 price tag. The rundown of specs:

Acer’s Chromebook R13 is a few leaps above this class of product, though it still runs Chrome OS. It has a glossy 1080P display at 13-inches. It has quite a bit of bezel on the bottom ‘chin’ which I’m not thrilled about but it is hard to knock the display itself. It is bright, has 170 degree viewing and is great for reading over long periods of time. It is even better for watching HD videos. If anything, the colors are a little washed out but nothing catastrophic. 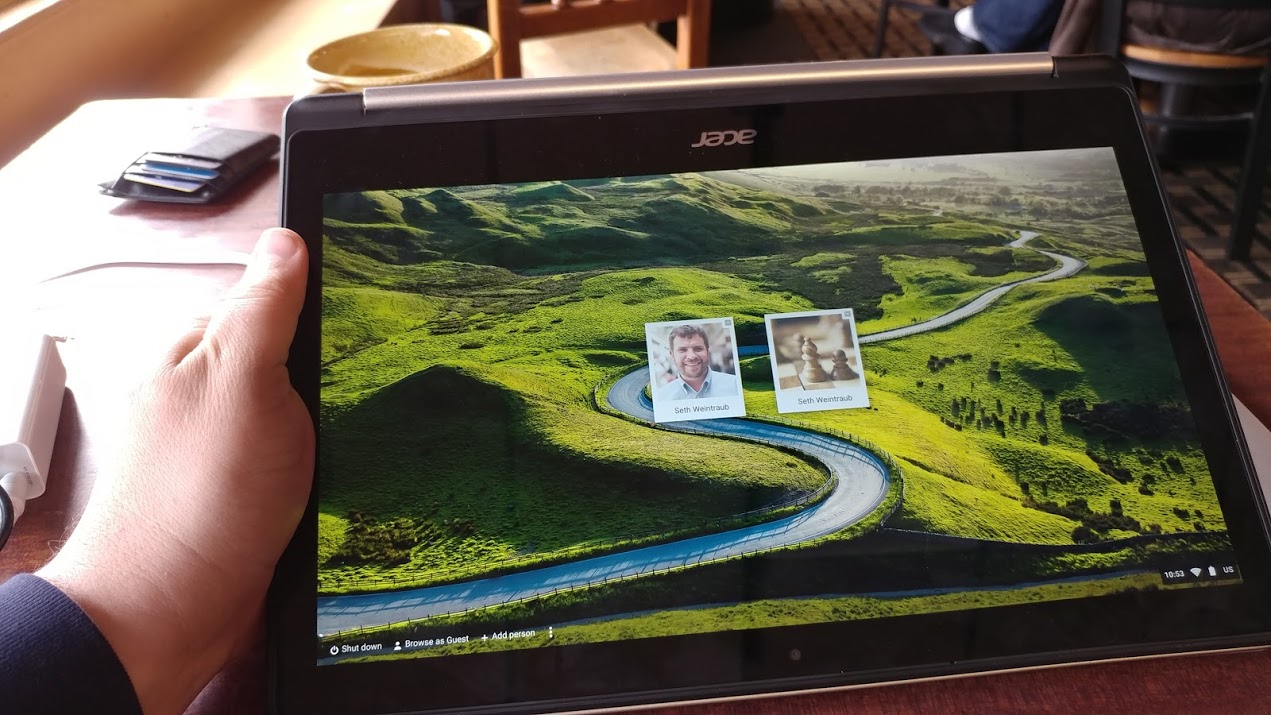 This is of course a touch-enabled display and I found it to be fairly accurate on 10 point touches, using the on-screen keyboard and arrows is quite easy and clicking the small window options on Chrome were surprisingly reliable. 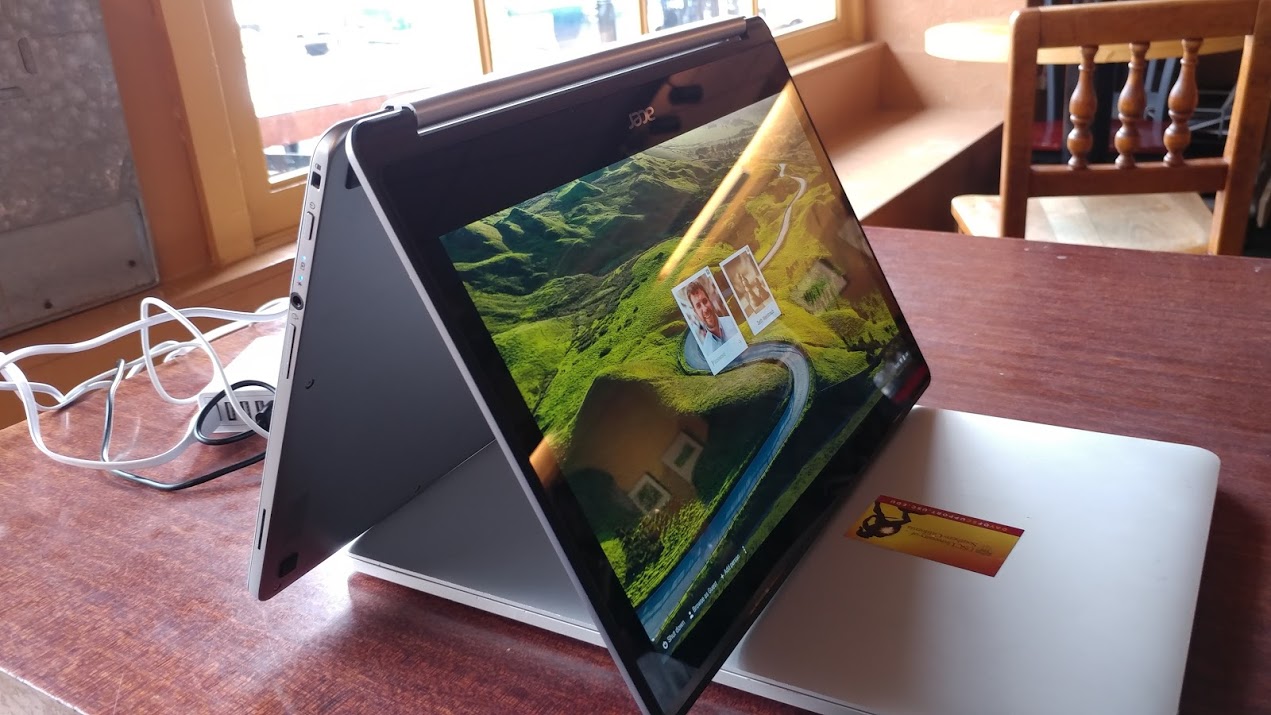 The 720P camera is surprisingly good for hangouts and people I typically conference with on my MacBook Pro couldn’t tell the difference. That said, there is lots of room for improvement color reproduction-wise. I’m not sure if I should blame the screen or the camera here…first word problems.

The R13’s keyboard is very similar to the MacBook Air’s: Black, non-backlit keys with typical motion make typing blindingly easy coming from Apple’s camp. If you are coming over from a MacBook, just switch the Alt and CTRL keys in settings and of course reverse the trackpad.

Speaking of trackpad, Acer went a little bit small here, and I get why: there is a huge trackpad overlaid on the screen that you are going to be using a lot of the time. But for everyday laptop typing, this is certainly usable and I have to say as a group, Chromebooks have been getting closer and closer to the high bar set by Apple here. The one better Chromebook trackpad I’ve tried is Google’s own Pixel and I’d say this one is pretty close on accuracy and feel.

Acer took a very unadvised example from Apple’s Retina MacBook here and only included 1 USB-C port which doubles as its charging port. Don’t get me wrong, I love USB C and it is quickly becoming the defacto charging port in my sea of gadgets, but I’d like to have a few of these, like on Apple’s new MacBook Pros.

Luckily, Acer also built in some ports for the “here and now” which will mostly set you free from using dongles. There’s a USB3-A port on both sides as well as an HDMI out, which does 4K at 30MHz impressively. Obviously 60Hz is would have been preferable but we’re talking about a $400 laptop here. 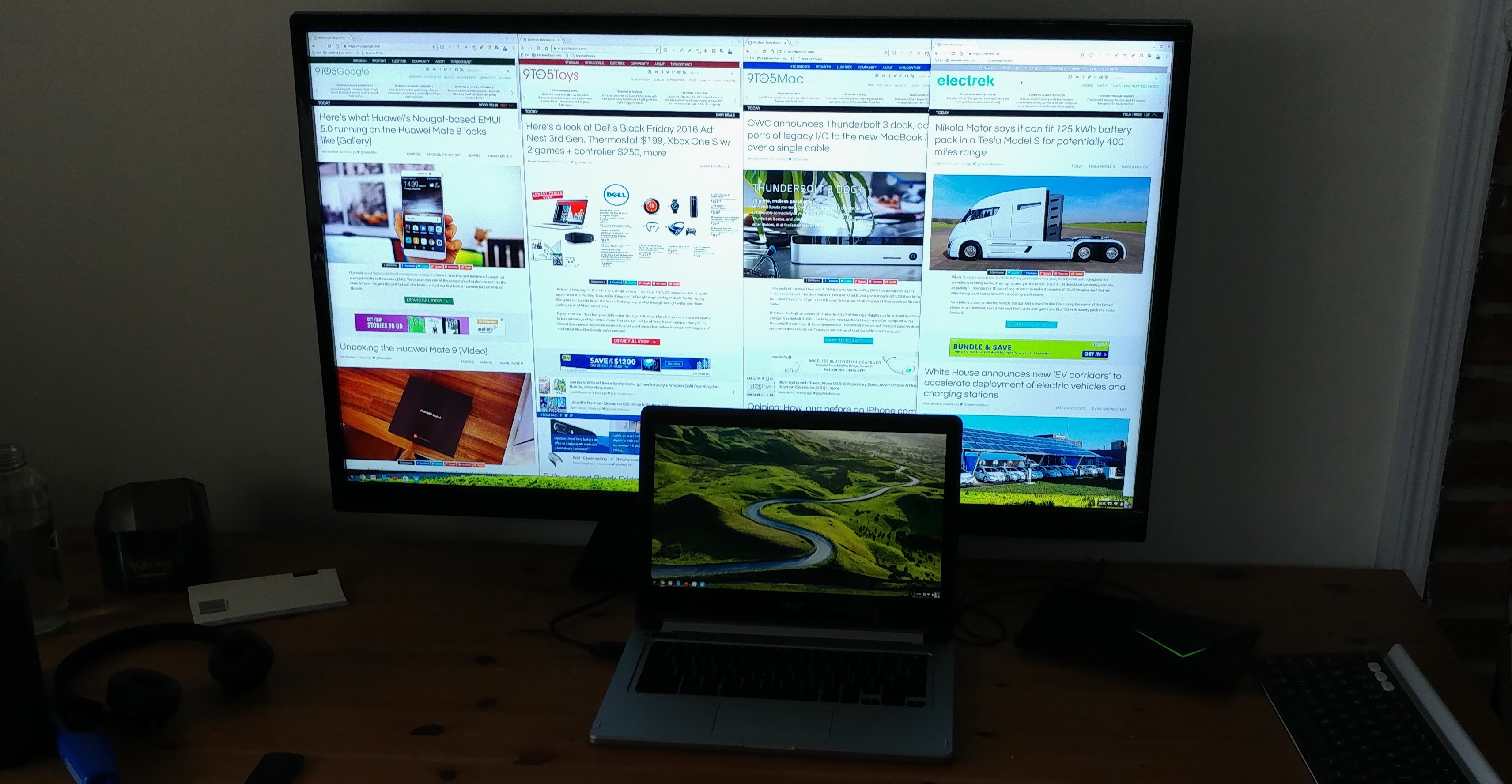 There’s also a volume rocker (tablet, remember?) that looks like a full sized SD Card slot for the uninitiated and some LED indicators for power and Bluetooth. The R13 has 2×2 MIMO 802.11ac Wi-Fi and Bluetooth 4.0 so wireless is speedy.

You also get a microSD card slot which is great for offloading images (but would have preferred full sized SD slot) and video and of course a headphone/mic jack. Two very good speakers are also on the sides. Remember this is a convertible so putting speakers on the top or bottom would only serve one of the tablet/laptop form factors.

I know exactly what a lot of you are thinking right now because I was also thinking “why put a garbage ARM CPU in an otherwise premium Chromebook”. Both 4GB of RAM and 32GB SSDs (16GB and 64GB will also be options) are pretty much the sweet spot although as folks get bigger appetites for apps, vendors might want to make the leap to higher capacities. That microSD card slot comes in handy here.

But back to that CPU. The fanless quad-core MediaTek M8173C processor powers this thing and I have to be honest with you here, it is a lot faster than I ever thought it would be save for the random Flash Website or other anomaly. For the CPU spec junkies, it is a powerful dual-core ARM Cortex-A72 running at 2.1GHz w/an energy-efficient dual-core ARM Cortex A53 running at 1.7GHz. A Neon multimedia processing engine with SIMD (v2) and VFP (v4) ISA support is also included, on chip. Add an Imagination PowerVR GX6250 GPU.

All that means that this runs with Intel Celeron processors which is respectable for Chromebooks and save for the Intel Core i series chips found in Pixels and high-end Lenovos and Dells, you aren’t going to find much better. With the 4GB of RAM, you can open up about 10-15 different tabs before things start to go into caching mode. That of course changes as you start to open more and more native Android apps. 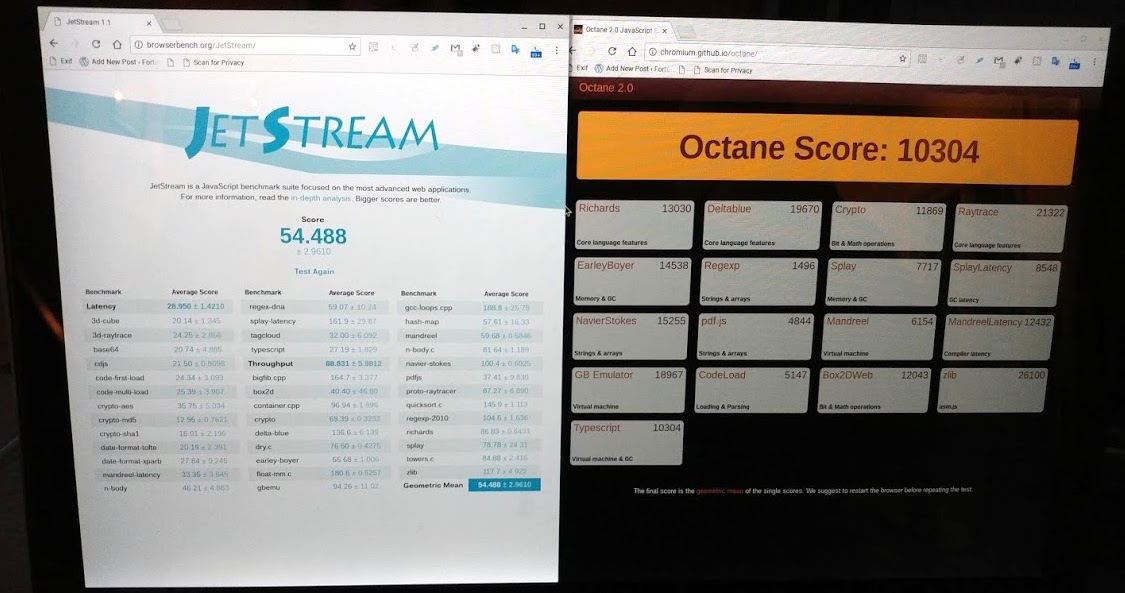 Javascript/browser benchmarks show this to be near the top of all Chromebooks in speed. On Google’s Octane, this is my first Chromebook over 10K while JetStream showed 54,488 (above) 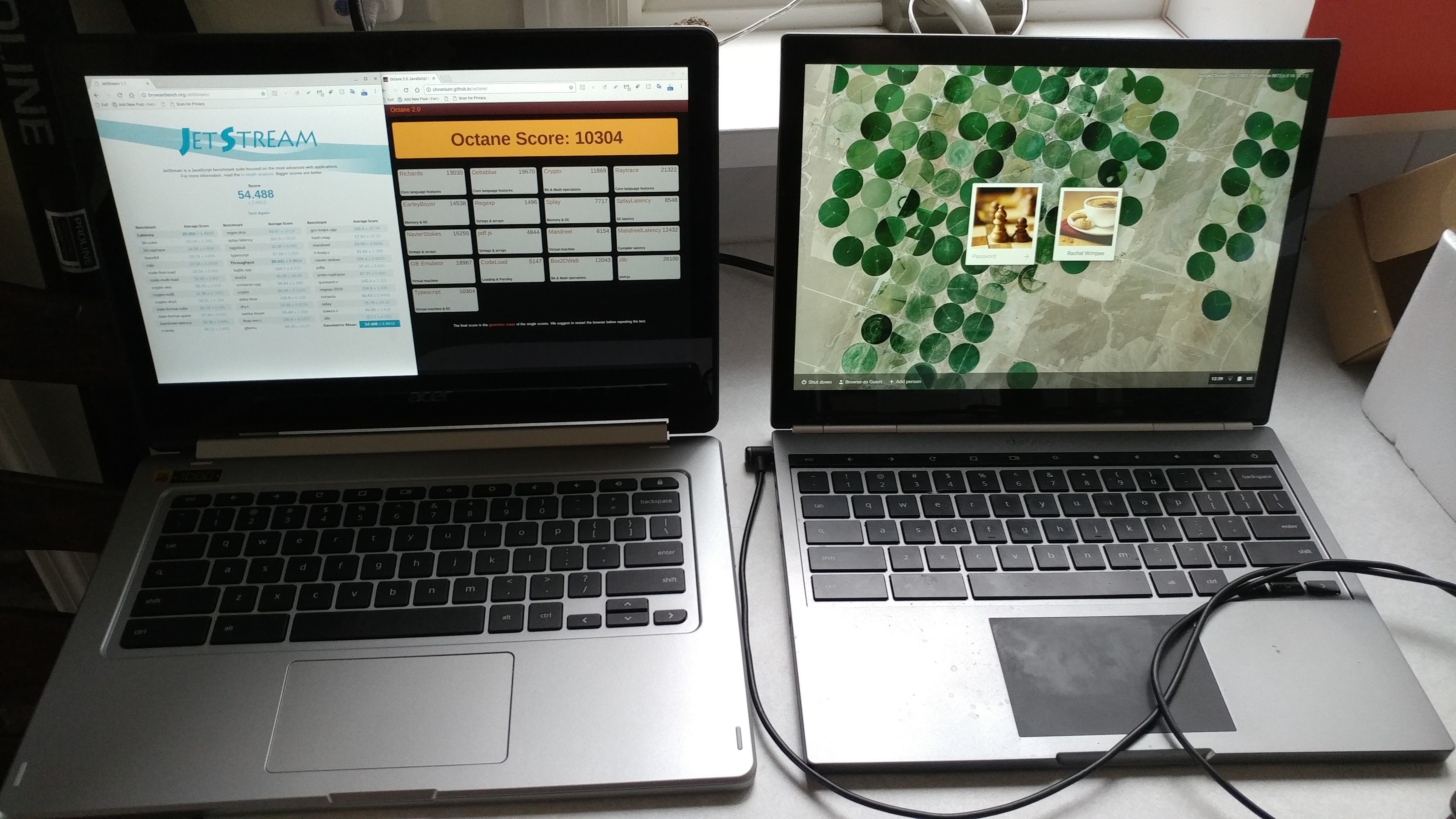 With the $400 price tag in mind, I’m not going to ding Acer for not going as hard core at the bezels as Apple has done in its latest MacBook Pro refresh. That said, this computer could be an inch less on both height and width without changing the screen size and keyboard layout. If you are buying a sleeve or case, you might want to err on the side of a 14-inch laptop. 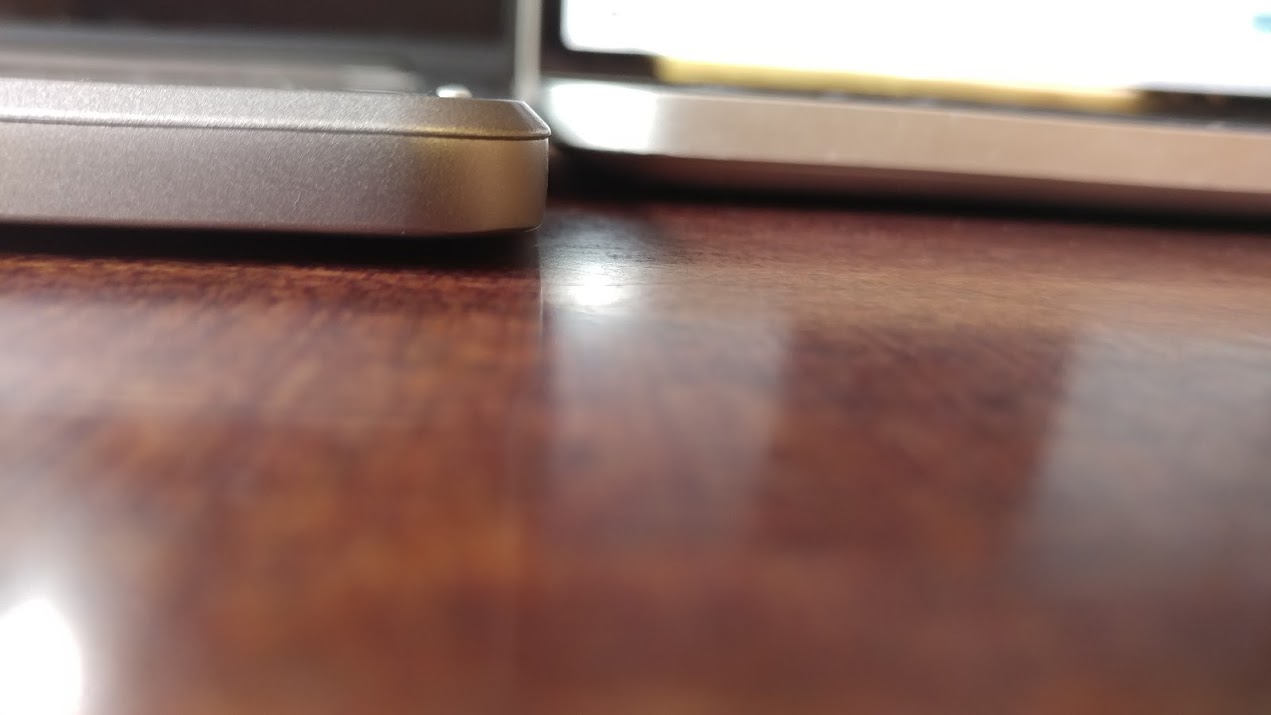 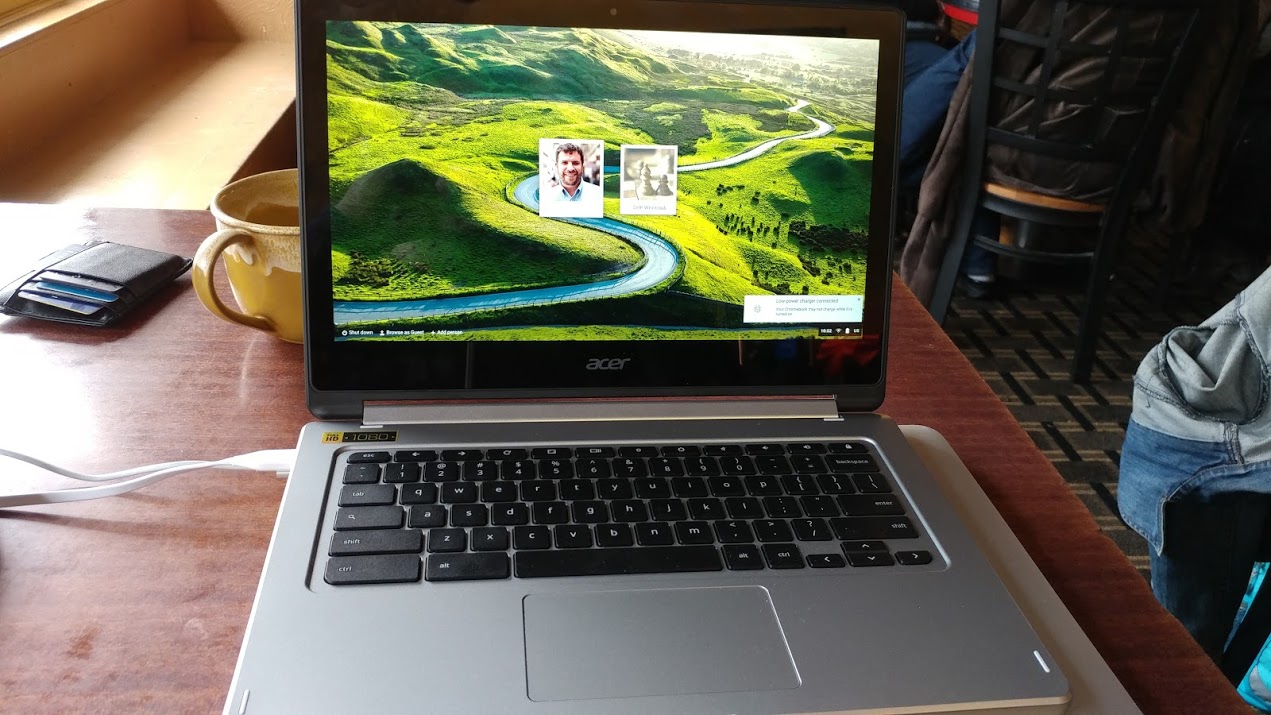 I’ll be honest, this is my first experience with a convertible Chromebook. Without apps, using Chromebooks as a tablet never made sense. With apps? Let’s just say it makes a lot more sense.

When folded 360 degrees, this is a monster 13.3 inch tablet. The touchpad and keyboard become dead so errant taps don’t affect the experience. That’s great and it pretty much acts like an Android tablet with a little bit extra on the Chrome side. Apps like Twitter and Facebook rotate and behave how you’d expect. Most of the apps I use day to day are here. You can use Uber on a Chromebook for the first time for instance. Media apps like Hulu, YouTube and Netflix work well. Google’s apps for the most part all make sense as well.

But this thing is super heavy and that mega-bezel where the Acer logo is makes this a not fantastic tablet experience. I’ve used it the R13 a number of times in the car or in bed but I’d much prefer an iPad Pro or Pixel C. The hinge is also plastic and, while strong, is slightly bendy giving the whole device a bit of flimsiness. While apps make a lot of sense for tablets, the Chrome windows with their tiny UI elements are a little harder to deal with. It would be cool if that when you went into tablet mode, those things grew finger touch size targets.

What is cool is that when I’m browsing the web while watching tv or in bed, and I see something I need to type I can fold the keyboard out and boom, I’m in laptop mode ready to fire off a message or update a post.

‘Display Mode’ and ‘Tent Mode’ are great for watching videos and some light tablet work. The hinge here is very good stiffness and the aluminum body is strong.

As I said previously, strictly as a laptop, the Chromebook R13 is worth the $400 price of admission and then some. Keyboard Mouse/display are top notch in the Chromebook world and the processor/ram/storage are all you can ask for. We’re talking top of the heap, only a step below the Google Pixel here.

As a tablet, however it doesn’t compete with purpose built tablets like iPad Pro, Samsung or Pixel C very well. It is heavy, has a huge useless bezel and a flimsy-feeling hinge. That said the software, even in beta performs and it is really a huge bonus for a laptop to be able to turn into a tablet at a whim and then a second later turn back into a laptop. While I can wholeheartedly recommend the Acer R13 for $400 this holiday season, I can’t help but think that with Android apps improvement and even more refinement on the hardware side, the winner is the Android/Chromebook platform.