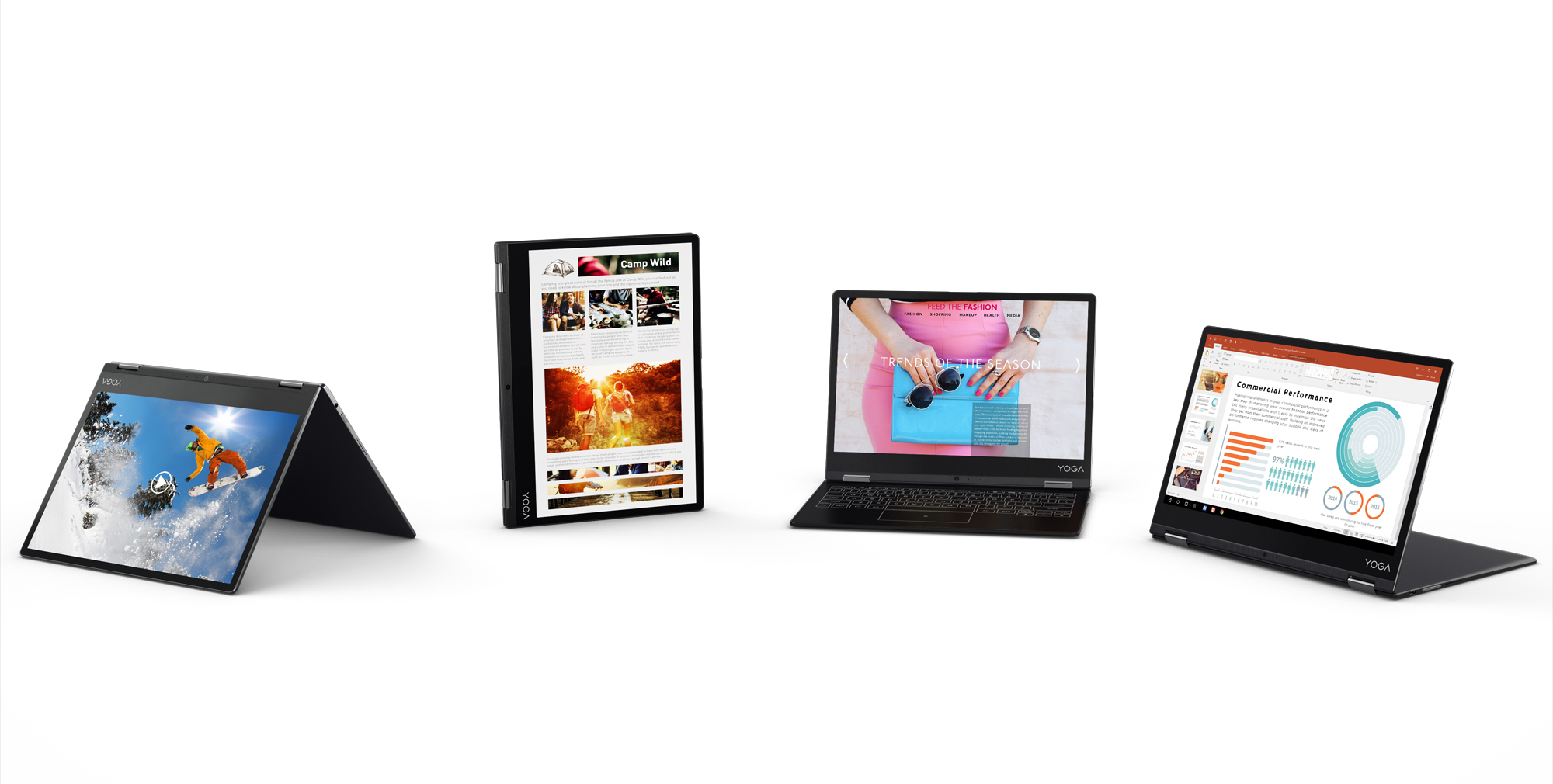 There hasn’t been much excitement in the world of Android tablets, but one option that impressed us in 2016 was Lenovo’s unique Yoga Book. Featuring a custom Android build, futuristic “halo” keyboard, and capable hardware, it was an excellent machine. Now, the company has debuted a new variant of that laptop/tablet hybrid, the Yoga A12.

The new Yoga A12, which first leaked out last month, brings the same basic design language of the original Yoga Book, as well as most of the same features. It has Lenovo’s custom, productivity-focused UI on top of Android, presumably still Marshmallow.

There’s also a larger 12.2-inch display at 720p, flanked by the signature “halo” keyboard on the flip side. That keyboard works on top of the same haptic feedback as the original, but should be a bit easier to type on given the larger overall footprint. Unfortunately, that extra panel doesn’t act at a digitizer for taking notes on the A12 like it does on the original, more expensive Yoga Book.

Powering the A12, Lenovo has another chipset from Intel, this time an x5 Atom backed up by 2GB of RAM and 32GB of storage. That’s considerably less power than the original Yoga Book, but now without reason. The A2 is definitely aimed at those looking to replace their aging laptops with affordable, capable machines. Its pricing of $299 undercuts some of the similarly sized Chromebooks released earlier this year, while still offering a somewhat similar experience.

Lenovo will open up sales of the Yoga A12 starting later this week on February 8th for $299. Lenovo claims 13 hours of battery life from the tablet, and it will be available in Gunmetal Grey and Rose Gold color variants.

Today, we’re announcing the Yoga A12, an affordable Android tablet made for all-day productivity, priced at $299. The Yoga A12 fits into a new category of personal computer — one especially for Android lovers.

In our constant search to create different and better products, we listened to hundreds of users from New York to Delhi tell us about their computing needs and operating systems of choice. We found a segment of users who grew up with Android as their first-ever computing experience—either on their family tablet or a personal smartphone. This held especially true in emerging markets. For these users, Android and productivity weren’t mutually exclusive—the smartphone or tablet experience can be seamlessly extended to the personal computer. That’s why we created the Yoga A12. It pairs the mobility of tablets and smartphones with productivity features to enable a versatile experience.

Opening to just 5.4mm at its slimmest edge and weighing less than one kilogram, the Yoga A12 is thin and light enough to take nearly anywhere and use on a busy subway train, a crowded cafe or in a classroom. Do work or decompress with a round of Clash of Clans or an episode of Netflix thanks to the Yoga A12’s 12.2-inch HD screen and two speakers, booming out the immersive cinema-like sound of Dolby Atmos®.

Powered by the Intel® AtomTM x5 processor with 2GB of RAM and 32GB of storage, the Yoga A12 is your digital companion for work and play thanks to a two-million-plus app ecosystem that comes with Android. The Android device is also easy to work on given the Yoga A12’s multi-tasking hybrid UI, the Google Productivity Suite and the revolutionary Halo keyboard to type out that report or presentation.

Weaving software and hardware into one fluid interface, the Halo keyboard is a fully flat, touch-screen keyboard that’s smart—it learns and adapts to your typing habits so the more you type on it, the faster and more accurate it becomes. The keyboard vibrates on touch with haptic feedback and learns from you as you type, with built-in prediction and artificial learning software. Lenovo first introduced the Halo keyboard feature to the premium Yoga Book series, a separate family of tablets that incorporates the paper digitization functions of the Create Pad and Real Pen for sketching and note-taking.

In a nod to the Yoga Book’s design, the Yoga A12’s Halo keyboard helps it achieve its thin profile. We completely re-envisioned the layout of the chassis, fusing parts in several component layers into one unified whole. Finally, we added a layer of carefully chosen glass for the touch-screen, varnished with anti-glare coating for the right matte finish.

This incredible thinness means you can use the Yoga A12 to work or study almost anywhere. Its four modes via the 360-degree Yoga hinge adapts to the tempo of your day, while you create, browse or watch on a number of different surfaces, work environments and settings. The Yoga A12 keeps you up and running with 13 hours of battery life on one charge.

Constructed of premium magnesium and aluminum, the Yoga A12 comes in either Gunmetal Grey or Rose Gold. The Yoga A12 will be available starting Feb. 8, 2017 on www.lenovo.com. Pricing for models starts at $299 (USD).