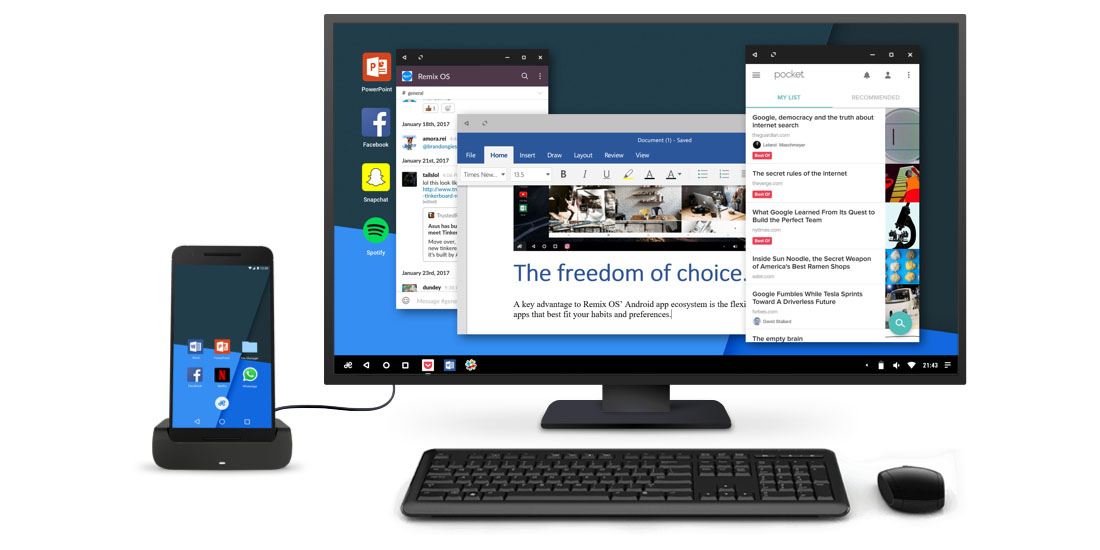 Most of us carry incredibly powerful smartphones in our pockets each day and in a lot of cases, those phones are more powerful than some older laptops or desktop computers. For many, their smartphone fully replaces their PC. The main limit with this, of course, is screen size. So, what if you could turn your phone into a full PC with a simple dock and monitor? Soon, you’ll be able to with Remix Singularity….

Remix OS has been floating around for a while now as a tablet-centric OS based on Android built from the ground up to be fully optimized for tablet size displays. Then, the company expanded that to a desktop OS, still based on Android. With Remix Singularity, Jide wants to bring that desktop experience with you inside of your Android smartphone.

This isn’t a brand new concept, we’ve seen Microsoft do this with Windows 10 and ‘Continuum.’ We’ve even seen attempts in the past to do this on Android. However, this is a big step forward in the world of Android since it will bring the concept to market in the modern age. Remix Singularity runs on top of a modern OS, and has access to Google Play for all your app needs too (well, once you’ve sideloaded it).

How does it work? The concept is pretty simple. With the OS loaded up on your smartphone you’ll have a simple, phone-specific UI. However, when you plug the phone into a monitor or TV, you’ll be able to display the full Remix OS we’ve seen for tablets. This also includes optimizations for using the OS with a keyboard and mouse. Presumably, you’ll also need to use a dock to provide power and extra USB ports for peripherals, just like with Microsoft’s Continuum.

Speaking to The Verge, Jide’s co-founder David Ko explains that Jide wanted to keep the UI on your phone “as close to stock Android as possible” and that, like previous versions of Remix, the OS will be free to download. Users will need to install the ROM and the Google Play Store themselves, though. Ko further explained why Singularity was created:

In the next five years, roughly five billion people will be coming online, and when they come online, their number one choice will be the smartphone; an affordable smartphone, and that will be an Android. If your phone can replace [your PC], it’s a huge saving, and has a big impact to productivity.

It’s unclear what hardware Remix Singularity will be compatible with, but it appears Jide is using a Nexus 5X or 6P in the promo video. That’s very likely as well considering past versions of Remix OS have run on top of Google’s hardware including the Pixel C and Nexus 9. Remix Singularity will be available starting this summer. You can sign up for updates on Jide’s website.