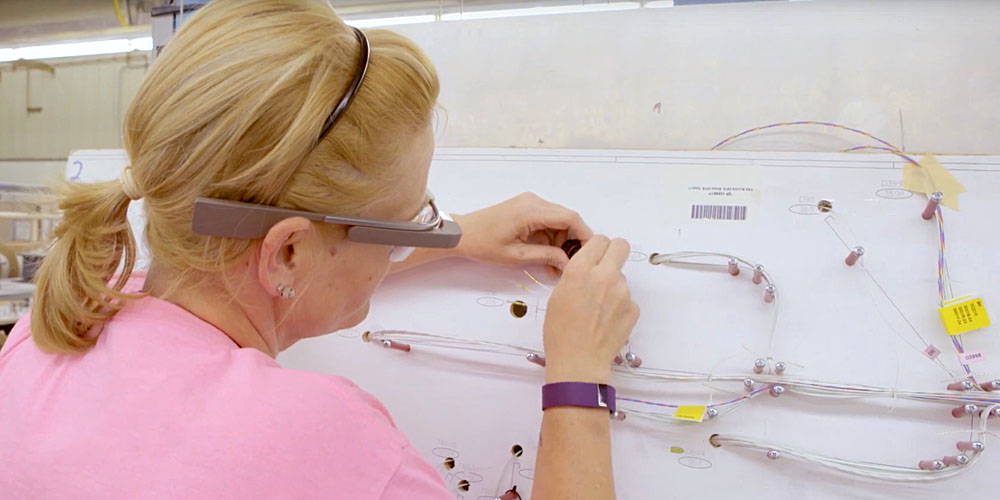 Google Glass Enterprise Edition in use at Boeing
0

Google may have long since abandoned its ambitions to sell Glass as a consumer product, but a focus on enterprise applications has apparently been more successful as the Enterprise Edition finally gets its official launch today…

That day has been a long time coming. We exclusively revealed the plan to reboot Glass as an enterprise device in a series of posts back in early 2015. Since then, we’ve seen FCC images and a patent, and even an eBay listing before we confirmed the name more than a year ago …

Signs of life in the project were seen last month in the form of an updated companion app and a subsequent firmware update – each the first update in three years. Now Wired reports that the enterprise product is out of testing and is being officially launched today.

The focus was on making a practical workplace tool that saves time and money […] For about two years, Glass EE has been quietly in use in dozens of workplaces, slipping under the radar of gadget bloggers, analysts, and self-appointed futurists […] Announced today, it is called Glass Enterprise Edition.

The piece describes how the device quickly demonstrated its value in an enterprise environment.

In April 2014, Google started a “Glass at Work” program that highlighted some of the early developers. And that year when a few people from X visited Boeing, which was testing Glass, they reported that their minds were blown by a side-by-side comparison of workers doing intricate wire-framing work with Glass’s help. It was like the difference between putting together Ikea furniture with those cryptic instructions somewhere across the room and doing it with real-time guidance from someone who’d constructed a million Billys and Poängs.

The model launched today has significant improvements over the original Explorer Edition. It not only now supports prescription lenses, but can be connected to a wide range of safety glasses and face-shields.

The camera button, which sits at the hinge of the frame, does double duty as a release switch to remove the electronics part of unit (called the Glass Pod) from the frame. You can then connect it to safety glasses for the factory floor—EE now offers OSHA-certified safety shields—or frames that look like regular eyewear.

Other enhancements include a faster processor, 8MP camera, faster and more reliable wifi – and an 8-hour battery life.

Making it official for the first time allows companies who have been trialing it to share their experiences, and the Wired piece describes some of these.

Today’s announcement, which frees corporate users from keeping silent about the EE edition and opens it up to countless more businesses, is a milestone in the resurrection of a technology left for dead. “This isn’t an experiment,” says product manager Jay Kothari. “It was an experiment three years ago. Now we are in full-on production with our customers and with our partners.”

The video below shows how Boeing uses it for wiring airliners. At the time the video was created, the company couldn’t reveal that it was using anything other than the original version of Glass.