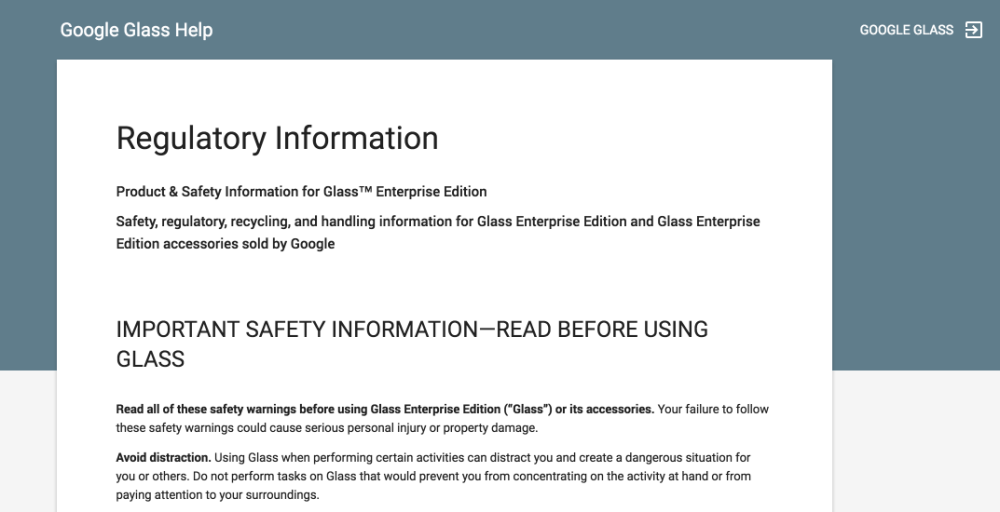 We told you across several exclusive reports last year about not-so-new Google Glass hardware that the Mountain View company has been privately testing within the Project Aura group and with external clients, but we were also the first to tell you that the device is internally known as “Enterprise Edition”.

Now, public-facing support pages we discovered on Google’s servers confirm the “Enterprise Edition” moniker as well as reveal regulatory and warranty information for the device…

In addition to officially confirming its name, the site also mentions the Glass EE battery pack that we told you about in July of last year:

While Google has never formally acknowledged Enterprise Edition’s existence, this is the first time we’ve found direct mention of the device and its accessories on Google’s own servers. As of today, Google is selling the device by way of the Glass for Work partners (i.e. CrowdOptic, Augmedix, UBiMAX etc.), but none of those companies have shown the new device publicly in any marketing materials to this date. That might change soon, however, as partners are no longer distributing the Explorer Edition.

If you want to read into the regulatory information and warranty information for Enterprise Edition, head over to Google’s website. Other than the little tidbits above, though, there’s not much interesting.

We saw Enterprise Edition in the flesh for the first time as it passed through the FCC late last year, and just a few months ago, the new hardware popped up on eBay for the first time and was bid up to more than $10,000 before Google claimed its lost property.