Smart speakers are quickly becoming a major part of the market, with customers adopting the likes of Assistant and Alexa powered speakers left and right. Now, a new report claims that Google is slowly catching up to Alexa while Apple lands far behind the rest of the pack…

Google Home first debuted in late 2016 in a market that was already gaining traction thanks to the Amazon Echo. Since Amazon had a head start of nearly 2 years, the company was leading in sales and market share tremendously, and that continues today. However, previous reports have shown that Google is gaining ground, and this latest report gives us a good overview of the state of this market.

Strategy Analytics reports that, during Q1 of this year, Google managed to sell around 2.4 million Google Home devices making up 26.5% of the total market share. That’s a massive increase from the same period last year, where Google only sold 0.3 million units (709% growth year-over-year).

Amazon still has a commanding lead here with the Alexa family of devices, though. The same time period saw about 4 million sales for Amazon, about 43.6% of the total market. Needless to say, Google still has a lot of work to do, but it’s definitely catching up while Amazon saw just 102% growth YoY. 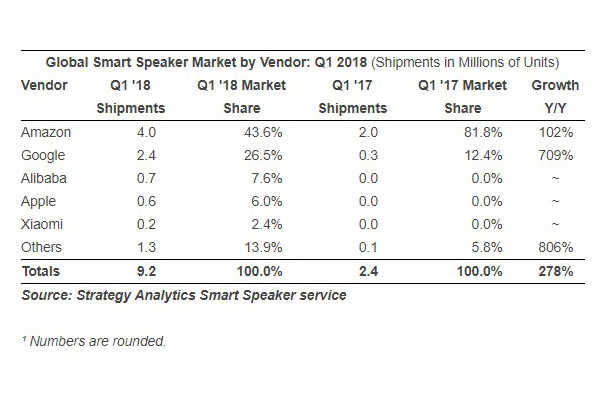 Meanwhile, sitting in fourth place behind Alibaba, is Apple’s HomePod. The $349 high-end speaker hasn’t made much of a dent in Amazon’s or Google’s success, selling an approximate 0.6 million units during Q1, making up a mere 6% of the market. Apple still has a lot of room to grow, especially if reports of a low-cost HomePod turn out to be true, but Google and Amazon clearly have a commanding lead.

Really, the most impressive thing here is Google’s year-over-year growth. Google managed to sell 2.1 million more units in Q1 of 2018 versus the same period last year. Growth like that can’t go unnoticed, and with new features and likely new hardware on the way over the course of the year, that’s probably only going to increase.

Do you prefer Google Home, Amazon Echo, or Apple HomePod? Drop a comment below and let us know your thoughts!