Android Pie for the Nokia 8 Sirocco now officially rolling out

The official Android Pie update for the Nokia 8 Sirocco should now be rolling out to devices globally after being confirmed by HMD via press release.

Now the eighth Nokia device to get a taste of Android Pie, the Nokia 8 Sirocco should be getting the 1379.5MB OTA download (as reported by NokiaPowerUser) right now. But as it’s often the case, it may take a couple of days to reach all devices out there.

Being a Snapdragon 835-powered device means that the Sirocco was always going to be perfectly placed for a Pie update and introduces Sirocco owners to the new gesture navigation method, whilst simultaneously adding all the extra features we have come to love since Android Pie debuted.

We were told that the handset would receive the update back in November, so it’s a heck of a lot later than it should have been, but it’s still welcome even if it is over 8 weeks later than HMD initially promised.

For those with the Nokia 8 Sirocco, it is definitely worth checking your System Updates section to check if the beefy download is waiting for your device. 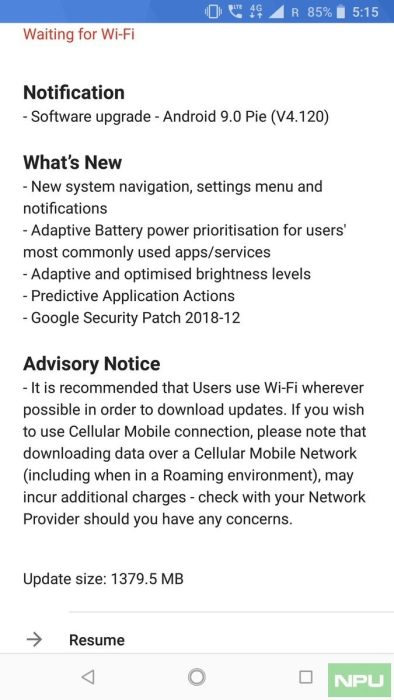 Whilst this device was never made available in North America, it is great news as other Nokia Android One handsets were clearly been given a bump up in the line for this Pie update. The Nokia 7 Plus, 6.1, 6.1 Plus and the brand new Nokia 7.1 all were deemed to have been a higher priority than Nokia’s only flagship-worthy handset on the market.