Last year, OnePlus shared its intention to break into the smart TV market as early as this year, without sharing too many of the specifics about how such a device would work. Now it seems the OnePlus TV is a real Android product line that has begun to reach regulatory bodies, revealing details such as screen size and availability.

This morning, the folks at MySmartPrice spotted that OnePlus has submitted a whopping thirty-nine devices to the Bluetooth SIG for approval, all marked “1+ LED TV.” From this alone, we know that OnePlus is serious about launching a smart TV, most likely even this year, as originally intended. There’s much, much more to gather from these listings, however.

One lingering question was what platform OnePlus would choose to run such a smart TV. Given the company’s experience with Android, it seemed like a safe bet that OnePlus TV would use Android TV, but the truth is apparently a bit more complex than that.

The description of each device, given to the Bluetooth SIG, is “Unique android TV.” What exactly this means is still unknown, as Google doesn’t allow much customization of the Android TV experience outside of the operator tier, as our Ben Schoon explains. A traditional consumer product like the OnePlus TV likely wouldn’t qualify for the Android TV operator tier.

Instead, OnePlus may be taking advantage of their knowledge and experience with traditional Android to build their own complete experience for TVs. Another potential meaning is that “unique” refers to the OnePlus TV hardware being unique, not the version of Android TV. 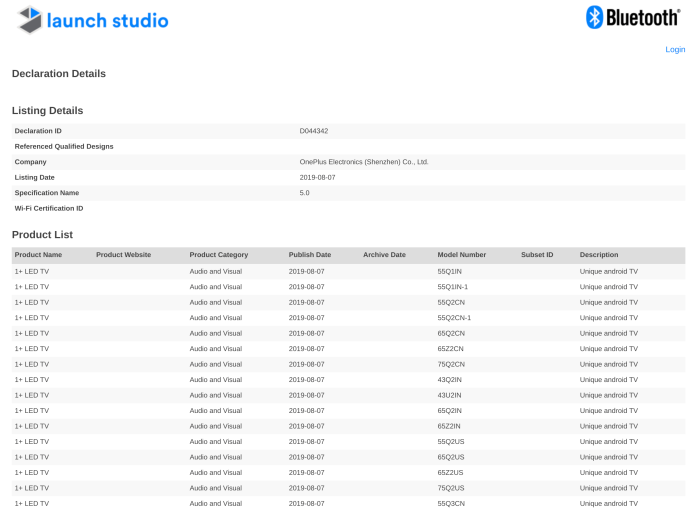 Looking closely at the model numbers, a very clear pattern emerges. They all start with a number that most likely indicates the size, and end with two letters that indicate the country that model will be sold in. For example, 75Q4US is most likely a 75″ OnePlus TV to be sold in the United States.

From this, we know OnePlus Android-based TV will be sold in four sizes — 43″, 55″, 65″, and 75″ — and three different regions — United States, China, and India. More specifically, it appears the 43″ model of OnePlus TV will only be sold in India, while the 75″ size will only be in the US and China.

The only other detail the Bluetooth SIG listing gives away is that all models will support Bluetooth version 5.0, thanks to a MediaTek wireless chip. It’s not clear from the listing whether the OnePlus TV will run on a MediaTek SoC.