The Google Nexus (@googlenexus) Twitter account was opened back in October 2010, several months after the launch of the Nexus One smartphone. Some of the account’s first tweets revolved around the Nexus S which launched later that year. Over time, the account amassed roughly 1.2 million followers.

Scrolling through the older tweets includes pictures of Nexus memories such as the Nexus 5, Galaxy Nexus, Nexus 7 tablets, and more. There’s even an adorable Nexus 5 decorated to look like R2-D2 in celebration of Star Wars day.

As Google’s Pixel launch came in 2016, the account confirmed that the Nexus lineup would continue to get software support and thanked Nexus users for the “integral role” they played in Google’s journey. 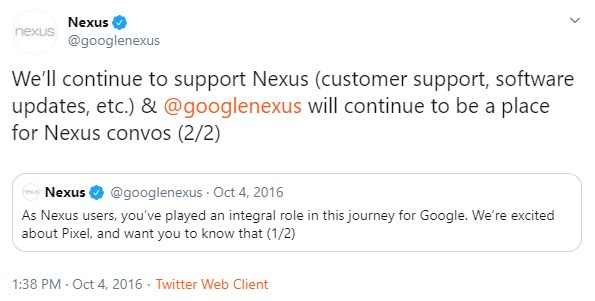 That tweet was the beginning of the end for the account as future tweets revolved more around software features, included mentions of the Pixel lineup, and more retweets from other Google accounts. In late 2017, the Google Nexus Twitter account sent out its final tweet shortly after the Pixel 2’s launch to mention that Nexus owners could get a discount on the newer hardware.

Now that the account has been set to private, only those that had already been following it can see the archive of tweets. Interestingly, this is one of the only examples we’ve seen of Google setting a Twitter account to private after retiring it. The @GoogleMobile account, for example, was shut down in 2012 but remains open to anyone even in 2019.