Earlier this year, the European Union finalized a Copyright Directive aimed at getting tech companies to pay a license every time a story snippet or summary appears in Search. Google today announced that it will be removing snippets from news results in France starting next month.

France is one of the first countries to adopt the new copyright laws. Coming into effect at the end of October, Google today laid out the upcoming Search changes for French users.

At the moment, when we display news results, we show a headline, which links directly to the relevant news site. For some results, we also show you a short preview of the article, such as a few lines of text (also known as a “snippet”) or a small “thumbnail” image.

Headlines will still appear in Google Search results for news stories, but snippets underneath the title or images will not be shown “unless the publisher has taken steps to tell [Google] that’s what they want.” The company yesterday released new tools that allow webmasters to specify what gets previewed in Search.

Options, which are expressed as robots meta tags, for publishers include having no snippet or specifying a maximum character length. The image preview can also be set to none, standard, or large.

In tests leading up to the Copyright Directive, Google detailed a 45% traffic decline to news sites that lack snippets in Search results. The company believes that “headlines and previews can help you decide whether a result is relevant to your search, and whether you want to click on it.” 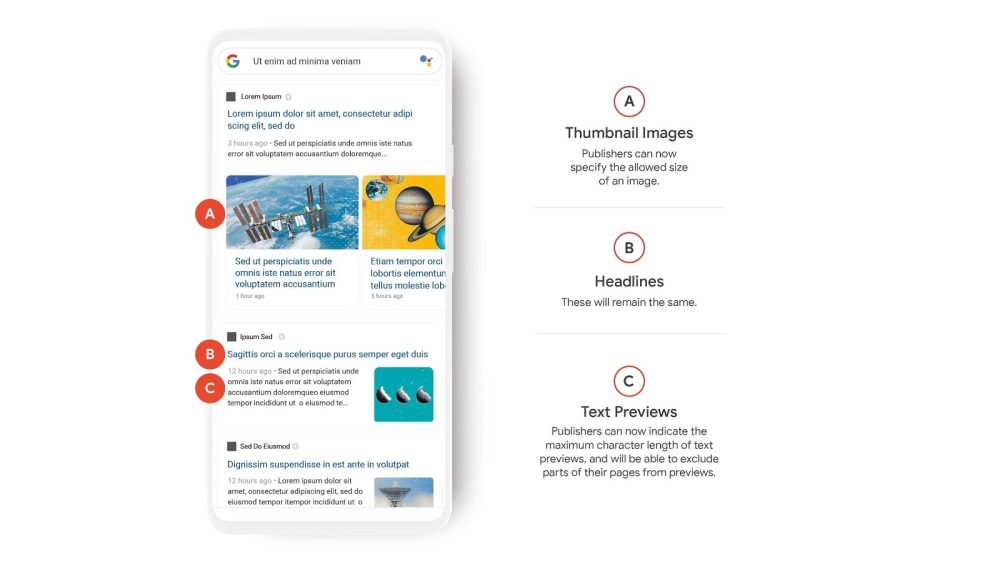 Google today defended its investment in news and its contributions that come “at no cost to publishers.”

In the world of print, publishers pay newsstands to display their newspapers and magazines so readers can discover them. Google provides these benefits at no cost to publishers.This creates real value for publishers: In Europe alone, Google sends more than eight billion visits to news publisher websites each month, or more than 3,000 visits every single second. Publishers can then build their audiences and grow their revenue from these visits through advertising and/or subscriptions.

The company also laid out how its content is determined by “relevance” and not “commercial partnerships.”