While Drive was one of the first Google apps to adopt the Material Theme, Docs, Sheets, and Slides followed later on the web and mobile. The latest set of updates brings Material Theme tweaks to the productivity app’s editor interfaces on Android.

This “new look and feel” applies to the standalone Google Docs, Sheets, and Slides apps on Android. Specifically, the editing interfaces you interact with when writing, inputting data, or creating presentations.

There are “no functionality changes,” but Google cites the following visual improvements: including a restyled document list, highly-legible typefaces, consistent controls, and updated iconography.

The differences are relatively minor and include some Material Theme elements. In Google Docs, the new style tabs are leveraged, and new hollow icons with bold outlines are used throughout. This should bring some consistency with the web counterparts, which were updated earlier this year.

This Material redesign is part of a larger effort to bring consistency to the look and feel of our G Suite apps, with ease-of-use in mind. 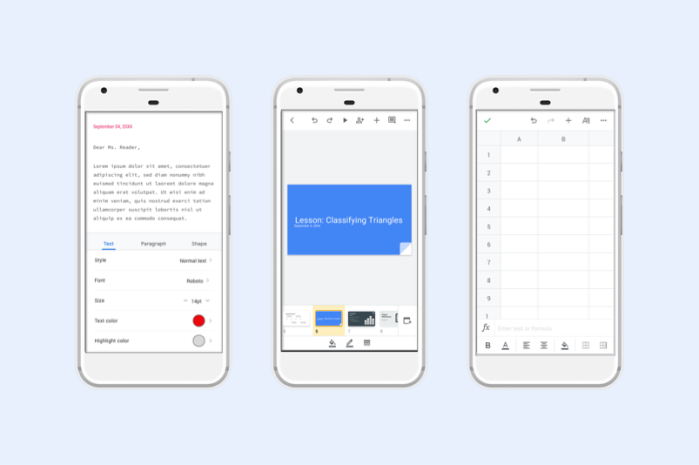 These updates look to still be rolling out as they are not yet live on devices we checked this morning despite Google saying “this redesign is already reflected in the latest versions of the Google Docs and Slides Android Apps.” Additionally, “it will begin rolling out to Sheets on Android today.”

Available for all G Suite editions, this gradual rollout will be complete over the next two weeks.