Google Messages, the default SMS app for Pixel phones and arbiter of RCS chat for those in the UK and France (or anyone else who wants in), is rolling out a new UI for its images view with new Google Material Theme buttons for downloading and sharing.

Google Messages has been the center of attention recently, thanks to an entirely too simple trick that can enable RCS chat on almost any Android phone around the world. A big part of what makes RCS great is bypassing some of the restrictions on SMS and MMS, including image and video sizes, to make a more iMessage-like experience.

To further improve the experience of sending and receiving images, Google Messages is rolling out a new UI for its image viewer. Where the previous design featured two simple icons in the top-right corner to download or share an image, the latest version of Google Messages shows two blue-on-white Material Theme buttons. 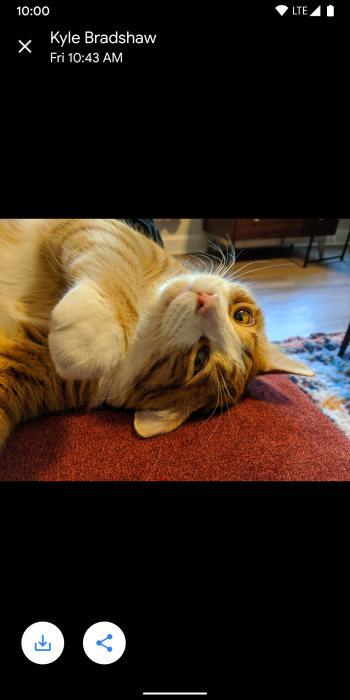 One of the readers who tipped us to the new viewer UI also noted that zooming in on images in Messages appears to be far smoother than before, though we haven’t yet been able to do a side-by-side test to confirm this claim.

The UI seems to have rolled out widely, with everyone on the 9to5 team having it enabled. To make sure you always have the latest features and improvements for Google Messages, be sure to sign up for beta updates either on your phone through the Play Store listing or on the web.