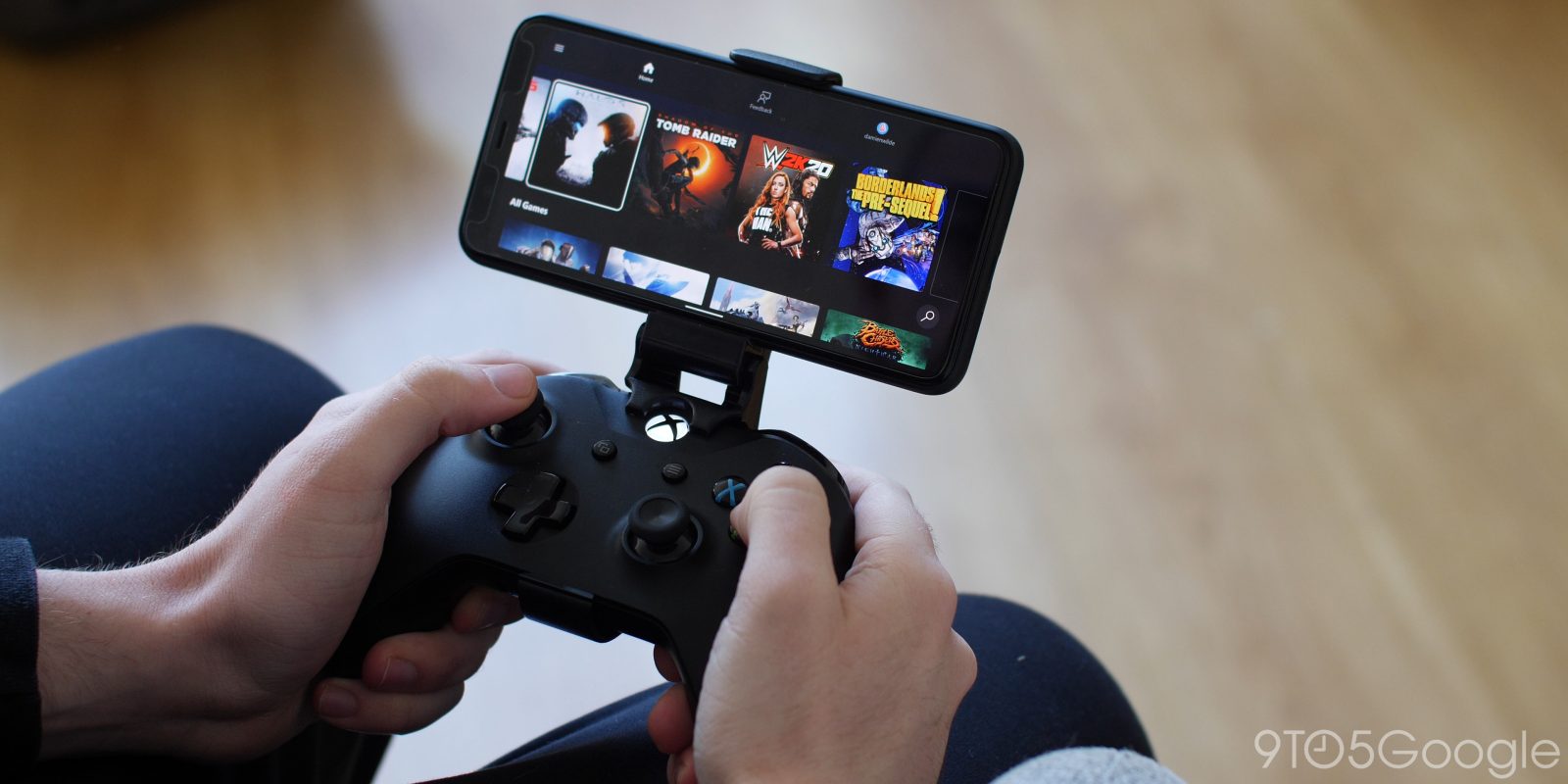 The cloud game streaming wars are set to hot up as right on the heels of Google Stadia we have gaming industry stalwart Microsoft offering the xCloud Preview — which doubles as cloud-based Xbox One console that is playable from your smartphone.

Whereas Google Stadia is officially launching, xCloud is very much in its infancy. The service is still in the very early preview phase and with limited access available to those lucky enough to gain an invite. I have been trying out the service for the past week on my home Wi-Fi network — with a 380Mbps connection and average latency of 12ms to Microsoft’s servers over 200 miles away in London, UK.

While waiting to get our own Stadia units, xCloud has actually filled in nicely and so far has been very impressive. My experience with the selection of over 50+ titles on the Pixel 4 XL has far exceeded what I had ever expected. This is unlike regular Android gaming but does feel very different from sitting at a PC or in front of a game console and playing like you’re used to.

Because of that, it feels like a halfway house that is hard to accurately describe. Being able to play the fully-fledged versions of some of your favorite Xbox games on your smartphone is a really big deal and one that we’re sure will have fans and hardcore gamers excited.

Is it any good though? These are our hands-on impressions of the Microsoft xCloud Preview for Android devices. 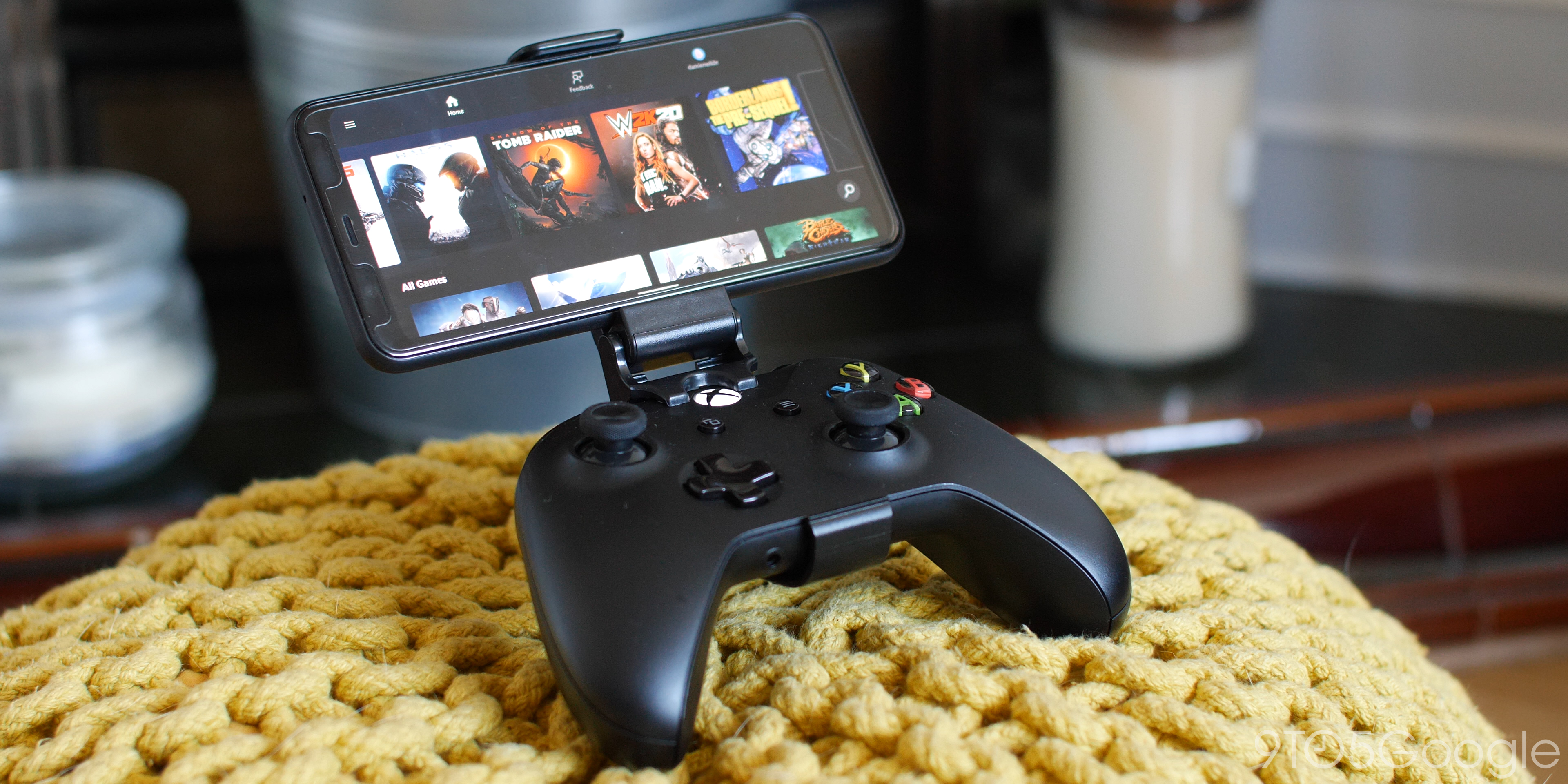 There isn’t any hardware to speak of with Microsoft xCloud — as with most cloud-based services. Despite being cloud-based, you do, however, need a gamepad to play titles and that does mean you’re reliant on your existing Xbox One controller to get the most out of the service. While there is a newer “Elite” version available, I opted for the standard Xbox One S gamepad, which seems ridiculously bulky when paired and clipped to your Android phone — I synced with my Pixel 4 XL.

It’s worthing noting that the original Xbox One gamepad or original Xbox Elite Wireless controllers are not actually compatible with xCloud. You’ll need to make sure you have the right version to play your favorite games.

Because of the size, I feel that xCloud is better suited to a tablet form factor rather than a smaller smartphone display but as phones are getting larger and larger, it does feel less of an issue. If you prefer to use a controller from a third-party, it should work just fine, although the button layouts may be difficult to get used to at first — Microsoft xCloud is essentially Xbox One gaming on your smartphone after all.

Microsoft is aware that having two separate devices floating around and trying to get the most comfortable gaming experience isn’t ideal, so they even suggest using an Xbox controller smartphone clip. This is bulky but an Xbox One gamepad won’t take up too much space in a bag, backpack, or medium purse.

Having tried both ways, I have to say that this is highly recommended. You’ll have far more fun with your phone attached to the controller like the original Nvidia Shield than having to prop up or lay it flat on a desk and then lean to peer over. Alternatively, you can always use a tablet and prop that up and have a far bigger display to experience your Xbox titles on.

I must also lavish some praise on the Xbox controller, as in my opinon is it practically perfect. The offset analog sticks, buttons, and triggers are just a step ahead of any other gamepad. It truly is a tough act to follow. 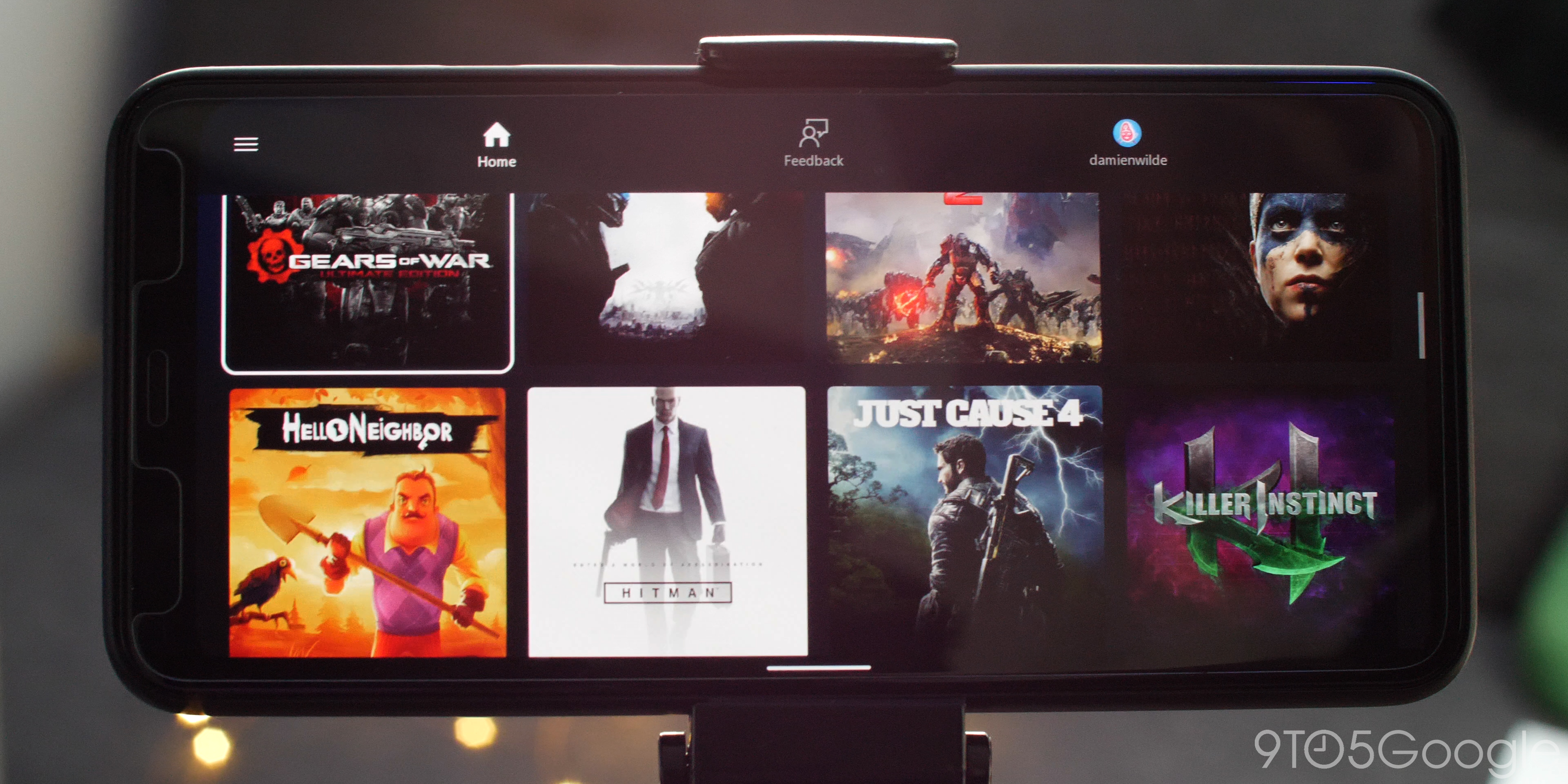 To enjoy what Microsoft is building with xCloud, you will need to use the dedicated Android app. It is currently limited to Android — although is expected on iOS at some point in early 2020. There really isn’t much to shout about here, as the main interface is pretty plain and functional.

Once loaded you are currently greeted with the 50 or so titles in a tiled format. It’s easy enough to navigate and when you select a game title you get a small expandable blurb on the game in question. Although this is a little bit nitpicky, I would have loved to have seen some screenshots of the games and maybe even a playable embedded video so I can decide if I’ll have any interest at all.

It’s pretty cut back at the moment with just the title, a play button, and some rating info. The upside is that you can use the touchscreen or your linked gamepad. I do, however, like just how cohesive the xCloud interface is with the Xbox One gamepad. Despite being fairly barren it is nicely laid out and easy to understand.

I suppose as a simple game launcher, this first iteration is pretty much what I expected but I had a feeling it might resemble the Xbox One dashboard a little more closely. You can do things like track Achievements, access your friends list, and join Xbox Live party chat though. Beyond that, the experience is pretty locked down and streamlined to almost 100% gaming or getting you into a game.

My biggest issue was the interface size in games. Most titles are limited to just 720p and that means that certain UI elements in games can be especially small. I had to tune these in games that would allow it while upping the brightness also helped make certain game-specific elements more visible on my Pixel 4 XL display. This is obviously a game-specific issue and one that can be resolved as the xCloud platform matures and ‘officially’ supports games. 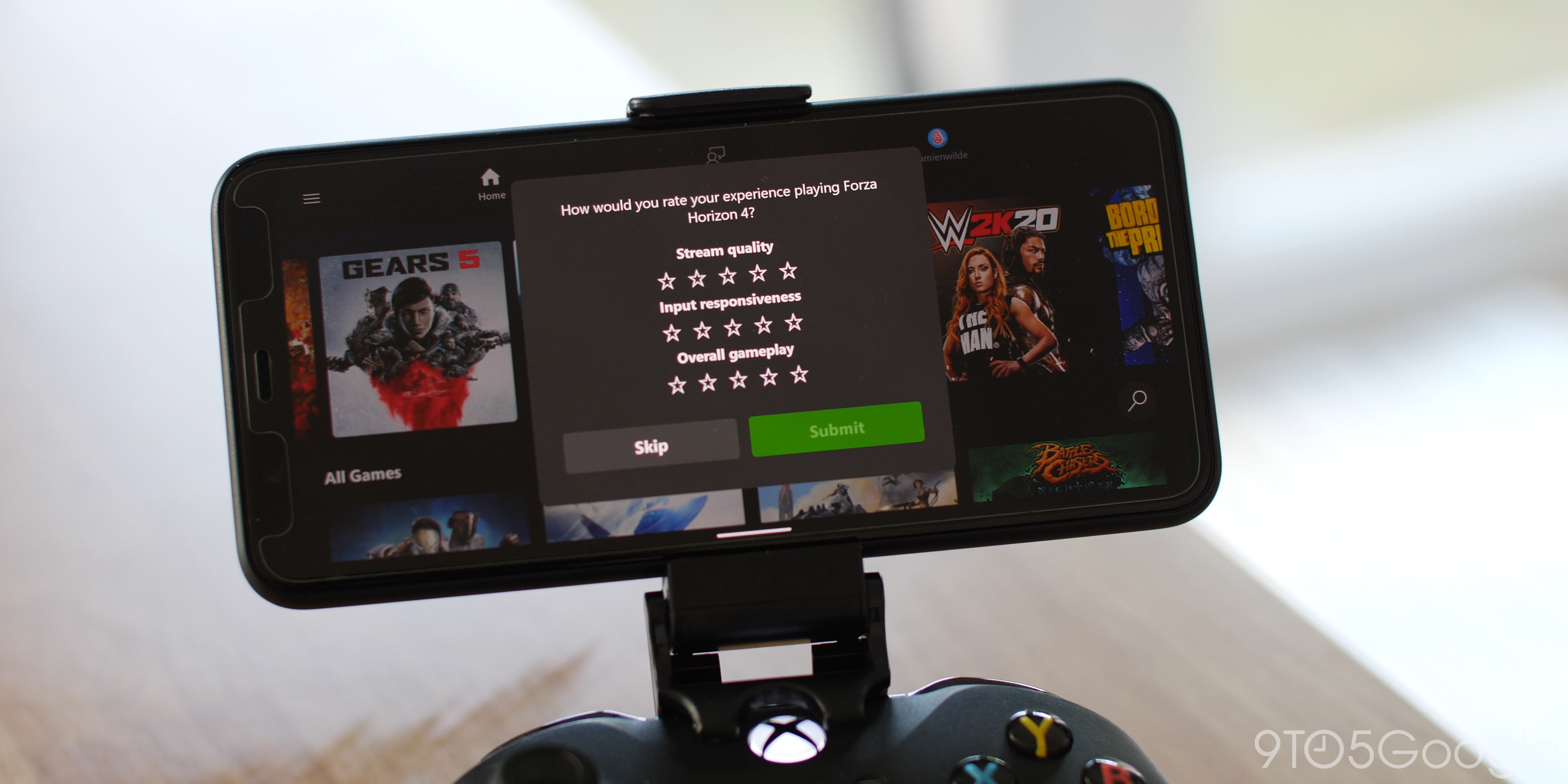 Like any cloud service, be that streaming or otherwise, your access to the internet is going to be the biggest and most obvious stumbling block. I can confidently say though that Microsoft xCloud in its current state runs pretty well and looks great — so long as your connection remains stable.

I am lucky enough to have a more than adequate connection speed that meets the minimum requirements of 10Mbps down. I did, however, notice issues at times where my Wi-Fi network didn’t quite reach a certain room or maybe dipped during congested periods of the day. My router often automatically switches between 2.4GHz and 5GHz, and when using the 2.4GHz bands I noticed the most obvious issues and problems.

The biggest giveaway that you’re about to see some sort of spike in latency or lag is actually the in-game audio. I used it as an early warning sign that something was about to jump or be an issue when music, dialogue, or gunfire would cut out or skip momentarily. 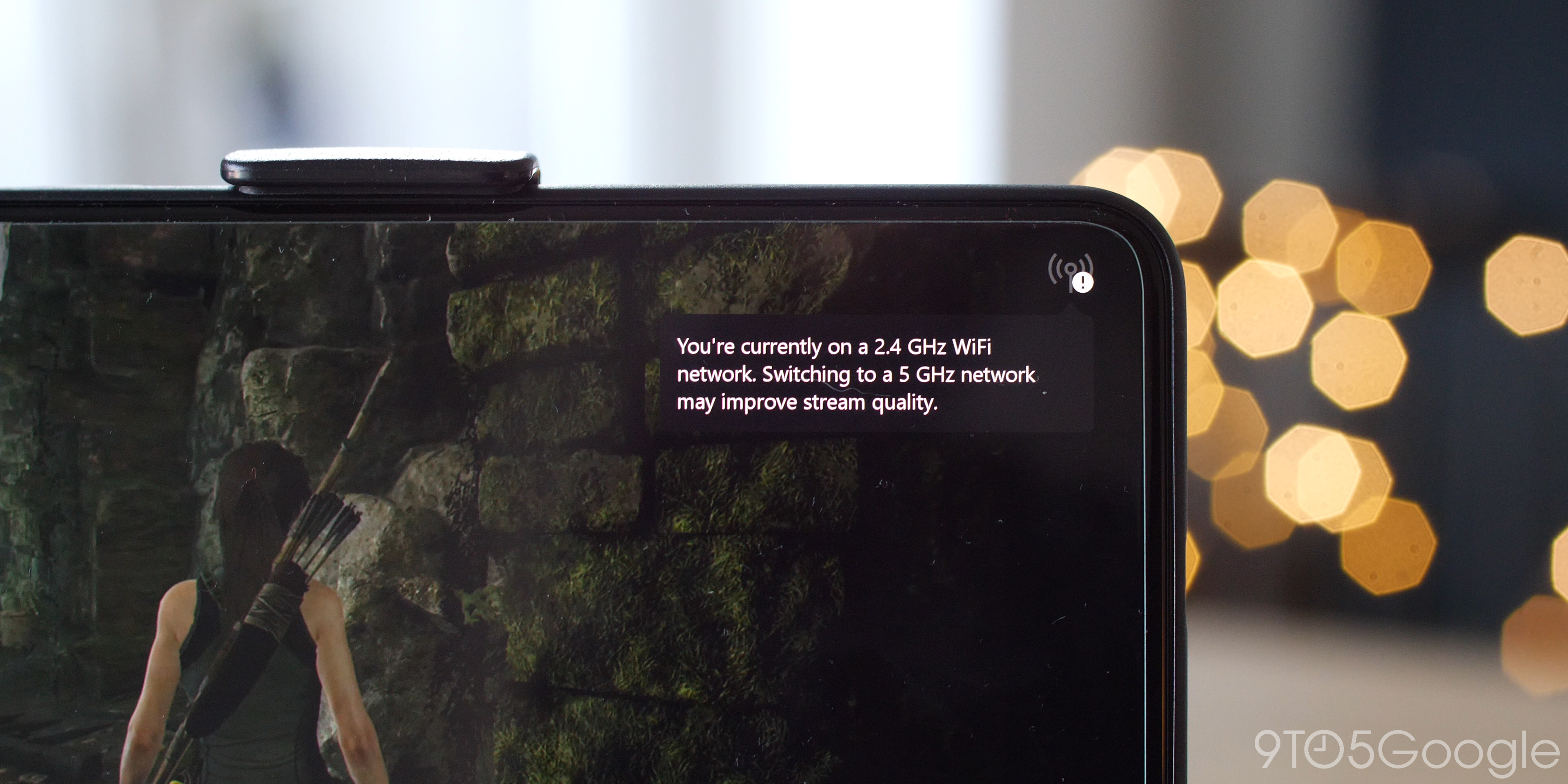 In single-player titles like Gears 5, the screen would show green artifacts and then grind to a halt before jumping ahead after catching up. Luckily, this was very infrequent and a notification at the upper right will inform you if your network is on the 2.4GHz bands. While it’s kind of acceptable in a single-player game, latency and lag like this can render multi-player games almost unplayable.

Playing some multiplayer Halo, I did see some minor lag here and there but, again, that was a rarity and it was more than playable. I did feel that some players might have an advantage due to this increased latency but maybe I just don’t have the reaction times I used to have. Getting into games took a little while but once in the game ran pretty smoothly.

Gears 5, however, was a dream. I played some versus multiplayer and had no issues at all. The gunplay was slick, smooth, and (humblebrag incoming) I even managed to put up some impressive leaderboard scores despite having not played competitively for some years. In eSports titles, it will be really interesting to see just how xCloud plays — I feel they will be far less forgiving of even minor lag or slowdowns. 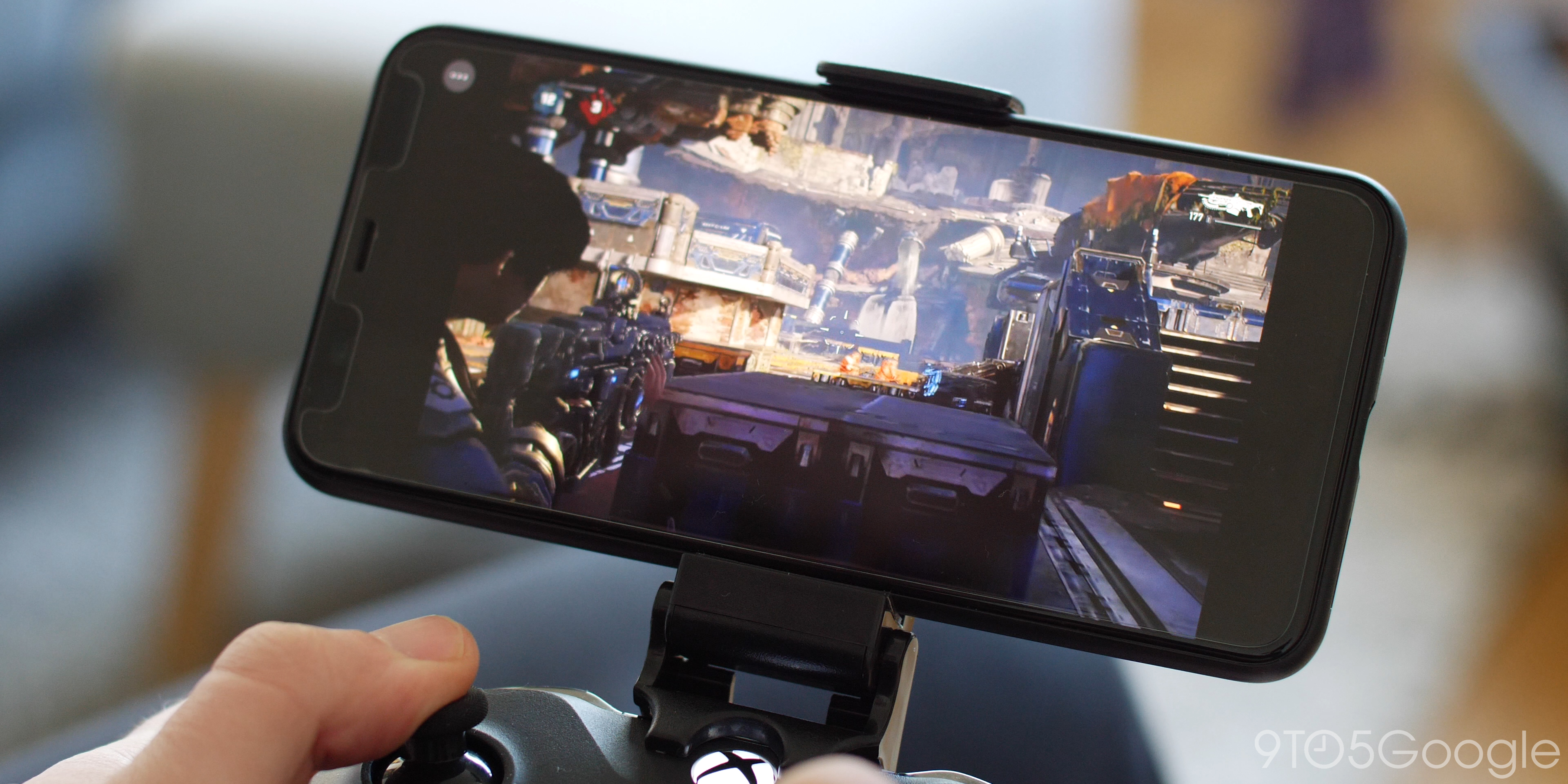 I’m not sure if the controller also played a part in the sometimes ‘light control’ feeling. Changing the sensitivity in games did help massively but I’m not sure if that is lag related or just the gamepad. Considering how few players are actually currently using the service, it’s difficult to ascertain just how this will improve when more players join the service.

Microsoft xCloud offers a mobile connection too but at this early stage, I was unable to try it out without severe lag and regular disconnections. Artifacts and slow controls were all too common and it was basically unplayable on a Three UK mobile connection where I live — in the outskirts of Leeds in the UK. Hopefully, this is one area that can improve though, as it felt like simply a carrier speed issue rather than xCloud being poorly optimized.

Given that Google Stadia can’t match the game library of Microsoft xCloud, it really will be able to initially offer an experience that exceeds the rival platforms. My biggest concern will be for those that want to access services like xCloud and Stadia on weaker connections. Latency is the biggest killer as far as cloud gaming is concerned.

Luckily, Microsoft has the game library and the heritage to really pull this off. Games generally run well on a solid connections and the titles far exceed what we’ve seen on mobile so far. Being able to take Halo and Gears with you will also be a bonus — although my 4G connection where I live is far too weak to really take advantage of this yet.

At present, xCloud already runs pretty well and has a reasonably solid game library of first-party and third-party titles that really does weigh heavily in its favor. I’m confident enough to say that even with Stadia now shipping, having more power; Microsoft xCloud actually seems to have an advantage already — and that should be a concern for Google. We’ll just have to wait and see how they stack up against one another in the coming weeks.

If you would like to try the cloud gaming platform for yourself, you can sign up to take part in the Microsoft xCloud preview here. You will need to pick up an Xbox One S gamepad — the original Xbox One gamepad is not compatible — and a smartphone clip for the most enjoyable experience.