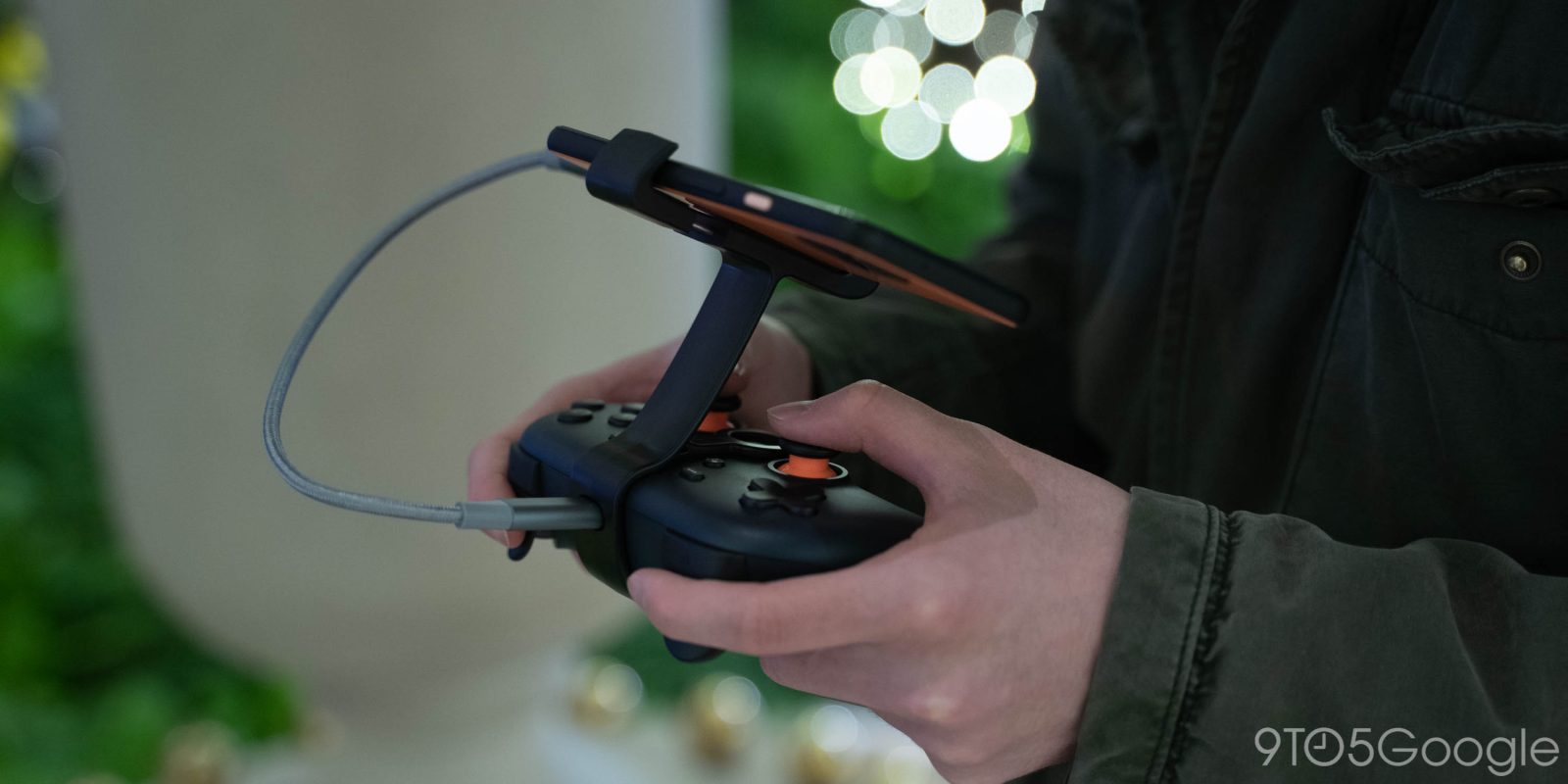 For over two months now, I’ve been playing video games almost exclusively on Google Stadia. In that time, Stadia has shown itself to be simultaneously both the best and the worst platform for multiplayer gaming.

In the time since Google Stadia launched, we’ve seen proof positive that game streaming does in fact work. Whatever your opinion may be on the other promises Google made, Stadia can absolutely deliver some games at 4K 60FPS. With that matter settled, we’re now able to look at the finer details of what makes Google Stadia better or worse than its traditional competitors.

For single-player games, there’s not much difference between Stadia and a console beyond the — admittedly annoying —  dips in quality that are currently inherent with streaming in general. Instead of playing on a local computer or console, you’re simply playing on Google’s computer with results streamed to your device.

On the multiplayer side of things, though, Google Stadia has an incredible, exclusive benefit.

Stadia has no server lag

Multiplayer games usually use one of two methods to connect players together. Some games use a dedicated server that processes each player’s inputs and sends back info to keep every player’s game in sync. Other games will select one player’s console to act as the “server” for everyone else in a particular session.

In either case, the quality of each player’s connection is determined entirely by their ability to connect to the server in a reasonable amount of time. Because of this, anyone who has ever played an online multiplayer game can tell you lag is common. The reasons for lag range from spotty Wi-Fi signal or a bad router configuration to just being physically farther away from the server.

Worse, the results of lag vary from game to game just as much as its causes. Lag in some games will leave you as a sitting duck for other players to stomp, while lag can actually give you an unfair advantage in other games by having your character jump around the map almost unpredictably.

When playing a multiplayer game on Stadia, players are connecting directly via Google’s network infrastructure rather than their home internet connection. That means you’re essentially guaranteed to have a fantastic connection to other players and/or the game’s server.

This benefit is multiplied by the fact that, with the exception of one game, there is currently no way for a Stadia player to play with someone from another console or platform. Therefore, every player you can currently bump into will have the same Google-powered internet connection that you do. Bungie, the developers of Destiny 2, even directly addressed this in the lead-up to the release of Google Stadia.

[…] if you’re playing on Stadia — with Stadia players — you’re all playing on the same cloud together. […] So, like, the additional latency you’re getting from your controller round-trip or whatever is gonna be offset in a positive way playing PvP on Stadia.

And it shows. In the two months I’ve been playing Destiny 2 on Stadia, I have only witnessed one instance of another player visibly lagging. In fact, the occurrence struck me as exceedingly odd, in the clearest example of an “exception that proves the rule.” By eliminating the dread of playing with someone with a bad connection, Google Stadia has become the best possible place to play competitive multiplayer games.

Unfortunately, the lack of Stadia games with cross-play is both a gift and curse. No amount of having a great connection can fix the biggest problem with Stadia’s multiplayer games: There’s not enough players!

Google Stadia soft-launched in November, slowly bringing Founders and Premiere purchasers online, followed by two batches of Buddy Pass players. Essentially, these are the people who were willing to bet on Google’s commitment to Stadia, and those who were willing to pay for Stadia before reading reviews — and their close friends.

Shortly after launch, this excited group of people was enough to keep the service’s games afloat, especially with the holidays affording many folks some time off to avoid awkward family interactions by playing video games. According to Destiny 2 statistics tool Charlemagne, which uses data provided by Destiny’s public developer API, there were over 25,000 Stadia players on Destiny 2 on November 23, 2019, the Saturday after Stadia launched. 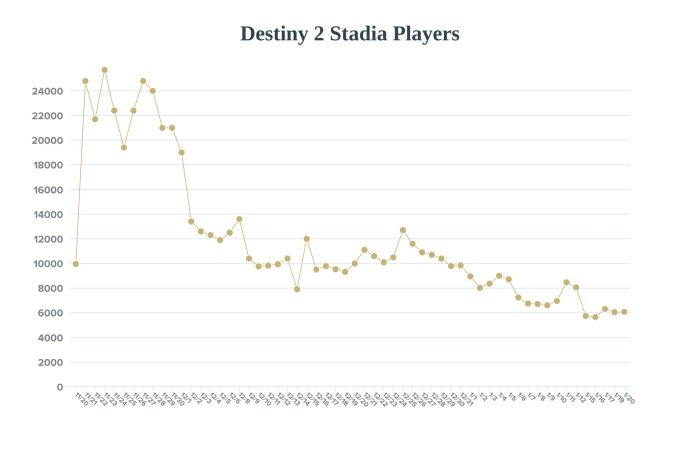 Since then, the excitement around Stadia has faded, and with it the number of active Destiny 2 players. So far in 2020, according to Charlemagne, Destiny 2 on Google Stadia has not had a single day with more than 10,000 players, with the population continuing to trend downward.

By comparison, established platforms usually have hundreds of thousands of players per day. Just yesterday, Charlemagne reports that Destiny 2 had 385,000 players on PlayStation 4, 270,000 on Xbox One, 368,000 on Steam, and a measly 5,590 on Stadia.

This leads to a vicious cycle of less players in unpopular game modes until those fail to matchmake altogether. I have personally given up on the idea of playing Destiny 2’s more competitive matchmaking playlist, Survival, on Google Stadia, as there doesn’t seem to usually be enough players (six) to start a match. And that’s not even accounting for differences in player skill level. 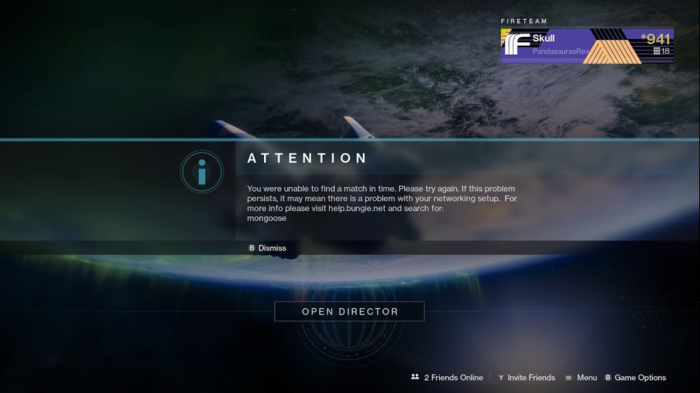 What I can say with relative confidence is that Stadia’s multiplayer games cannot survive much longer with the amount of players that Stadia is currently allowing. Google is running out of time to launch the free tier of Stadia Base and allow players to join Stadia Pro for nothing more than the $10/month subscription, before the current player base — once the most excited Stadia fans — lose interest and buy their next multiplayer game on traditional platforms, where at least they’ll have people to play with.