Google Chrome has been one of the most popular browsers for a long time now and recently, Microsoft updated its Edge browser to run on the same Chromium base. In an act of collaboration between the two companies, Google Chrome is preparing to take on a handy tab management feature from Edge.

Spotted by a Redditor and highlighted by The Verge, a Chromium Gerrit commit shows Google and Microsoft software engineers working together. Leonard Grey, an engineer from Google, expresses interest in bringing a feature from Microsoft’s new Edge over to Chrome revolving around tab management.

Specifically, this feature allows the browser to move multiple tabs into another window. This already exists in Edge and it’s handy for splitting groups of tabs into a new space to keep things better organized.

Grey mentioned in a note that if Microsoft is “still interested in upstreaming this from Edge, we’d be happy to take it.” Justin Gallagher, an engineer at Microsoft, then responded saying “sounds great! I’ll take ownership of this issue then.” That conversation took place weeks ago and, in the time since, Microsoft has committed the needed code for this user-facing feature to Chromium. More than likely, this will appear in Chrome’s Canary builds.

Update 1/28: Just after this feature came to light, it’s already available. Detailed in a Reddit post, the latest version of Chrome Canary (v81.0.4041.2) has added support for this handy feature in the context menu. Given how quickly it was added to Canary, it seems like this will arrive in stable sooner rather than later. 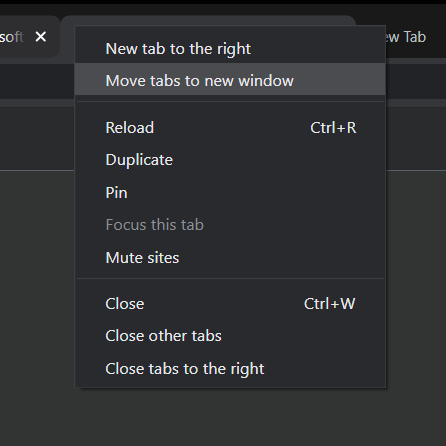 Will this tab management feature be the only example of Microsoft’s Edge influencing Chrome? Probably not! After all, the company’s new-found interest in Chromium has seen hundreds of commits in the past year that help both Edge and Chrome.