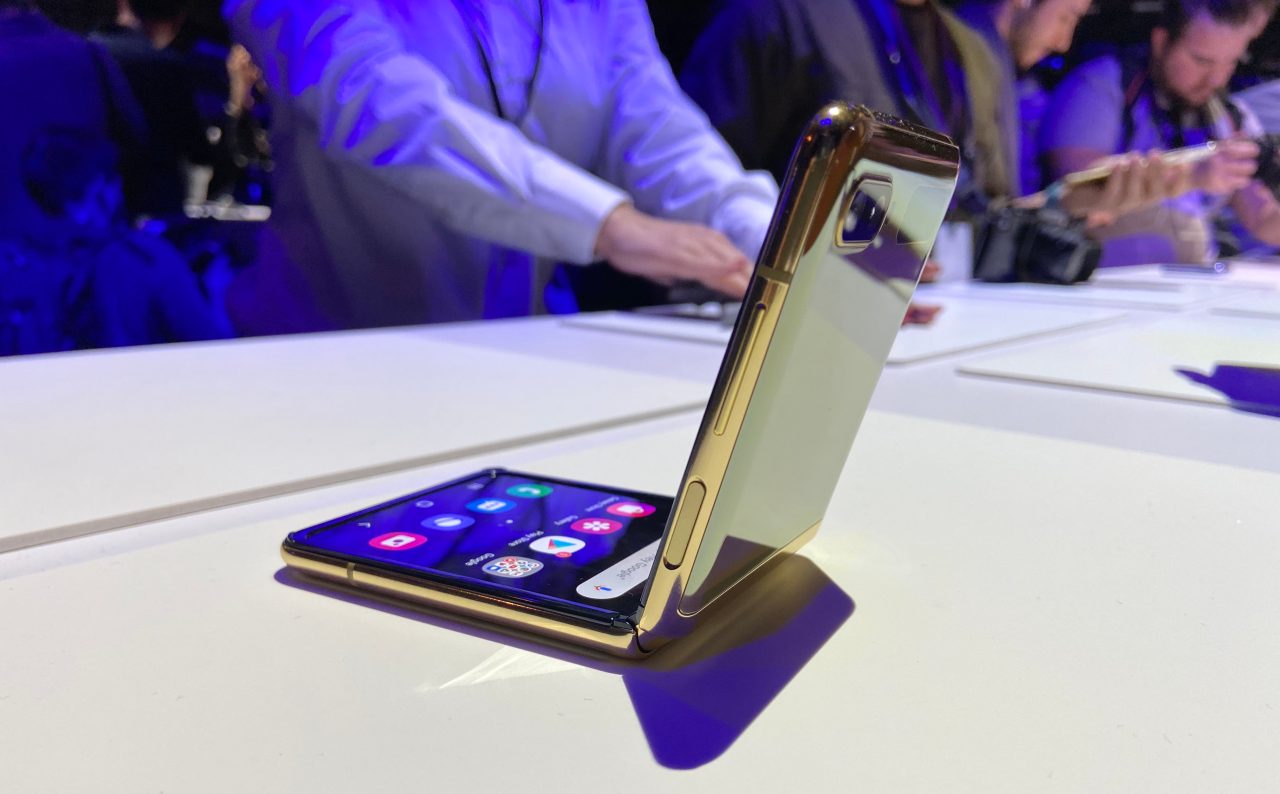 It’s Samsung Unpacked 2020 today, and the first 20 minutes of the event were by far the most interesting. Samsung jumped right into the thing that’s catching most everyone’s eyes and minds — the Samsung Galaxy Z Flip. This is the third major entrant in this new category of phones we call foldables, following last year’s Galaxy Fold and the more recent Moto Razr. I’m still trying to put my thoughts together on these as a category, but the Z Flip is definitely the most promising one yet.

Here’s my thesis: If smartphone makers can approach an asymptote of minimal compromise while foldable devices bring the benefits of being foldable, they might just have a chance at being more than just yet another Android gimmick.

It’s a spectrum, right? On one end, you have features like physical keyboards or S-Pens. You have a device like the BlackBerry Key2, which had one very unique feature — a keyboard — that served a small portion of Android phone buyers. But phones having physical keyboards is not a natural evolution of the standard smartphone — in fact quite the opposite — and the Key2 doesn’t predict anything about the future of these companion devices we’re so dependent on.

On the other end, Android OEMs have often been the innovators that predicted and initiated a market-wide shift. You have the features like wireless charging or OLED displays, which started as niche innovations and eventually permeated the entire market and became the new normal. Some of these took a while to be wholeheartedly adopted by the biggest players — I’m looking at you, Apple — but they pulled through nonetheless.

So the question we’re left with is this: Which one is this current wave of Android foldables? Or is it somewhere in the middle? If you asked the Moto Razr, based on current reviews, it would tell you the former — this is just a gimmick to sell a few handsets via nostalgia. If you asked last year’s Galaxy Fold or the Galaxy Z Flip, you’d get a slightly different answer. We’re stuck somewhere in the middle of that spectrum for now, and no one really knows which way things are going to go.

I don’t have the answer today, but I do have some thoughts on which way the Z Flip tilts the scales.

There’s at least one big thing going for the Z Flip: it’s the first foldable that doesn’t feel like it’s going to break in your hand. In the brief time that I’ve had with the Galaxy Fold over the last several months, I was never able to shake the feeling that it would fall apart in my hands. The Moto Razr, which shares a form factor with the Galaxy Z Flip, also doesn’t inspire confidence when opening and closing it. Whether it’s the gap between the body of the phone and the screen or the creaking when opening and closing it, that phone just isn’t there yet.

The Galaxy Z Flip feels like the smartphone version of the confidence you might remember from days of classic flip phones. I felt pretty good about flipping it open with one hand and pretty significant force. Maybe I’d feel differently if I paid $1380 for it and didn’t have the luxury of knowing I wouldn’t be held accountable for breaking it in a hands-on area, but I’m trying to be as objective as I can here. It feels sturdy enough to hold up to days-in and days-out flips and angry phone hangups.

In my brief time with it today, I’m coming away feeling like it’s probably the first foldable phone that I can recommend on a fit-and-finish or build quality standpoint. Obviously far more testing will be required to see how it actually holds up in day-to-day use, but the feel I got today was pretty convincing. Even pressing my thumb in the crease in the middle of the display to close it with one hand inspired more confidence than the Galaxy Fold, perhaps because of its glass display.

The front display is barely useful

Unlike the Galaxy Fold, the Galaxy Z Flip doesn’t have a full-fledged phone display on the outside. Instead, the device has a small 1-inch display that shows the current time and date. That’s useful for getting a quick glance at the time and a couple notification icons without having to open the phone, but some of the other things that Samsung is trying to do here feel like a stretch. 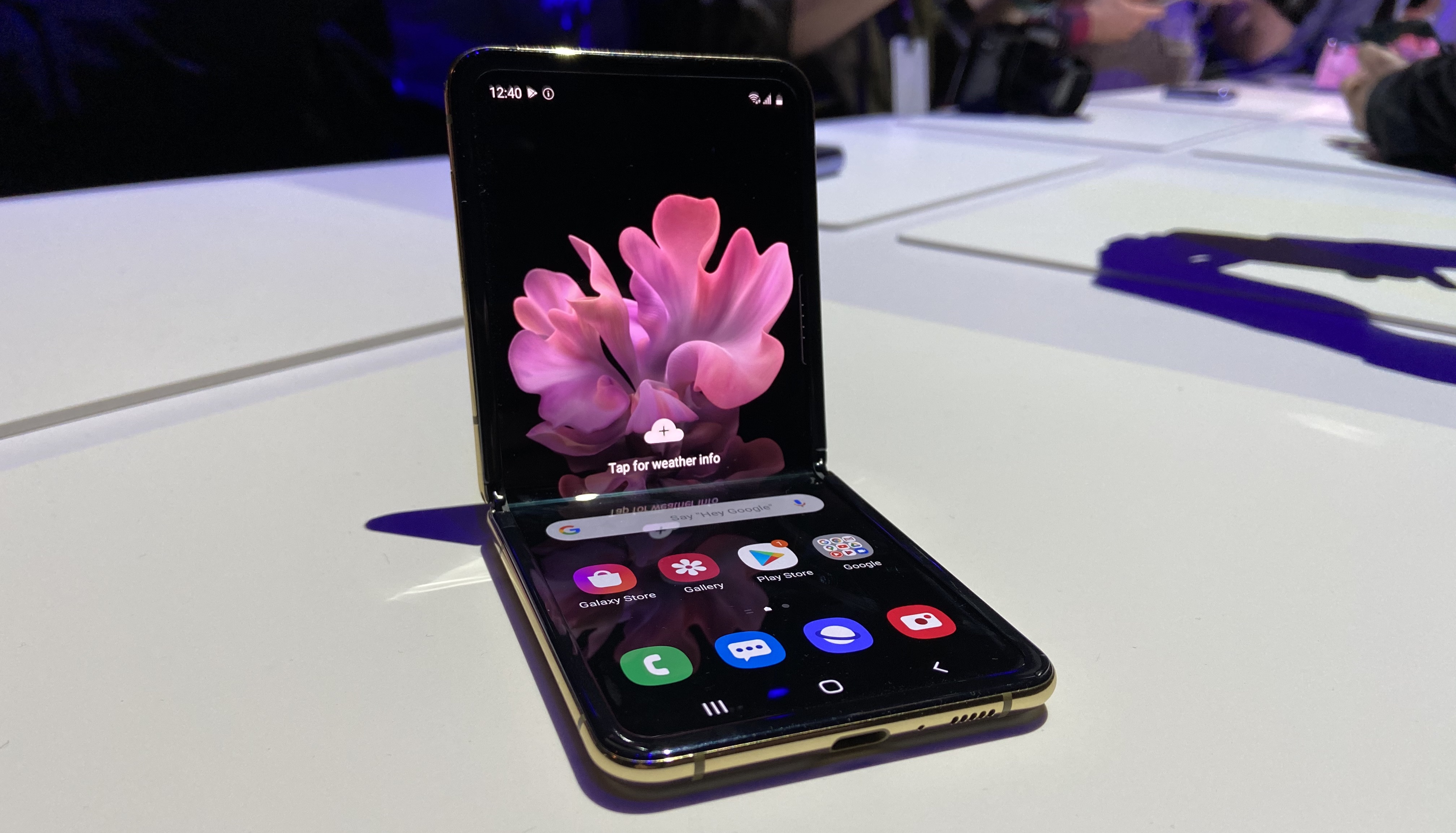 The most notable of these is that you can double-click the lock button on the side of the phone to pull up a tiny selfie camera view. You then press the volume keys to take the photo you can see previewed on the display. Honestly, this feels like a gimmick and Samsung reaching for something to give the tiny display a job. I don’t see me — or anyone — ever taking selfies on this tiny display. If you’re taking a selfie with this phone, it makes much more sense to just open it up briefly and get the full preview you’re used to.

Samsung is also making a concerted effort to pitch some software-based features that might make the Galaxy Fold seem compelling. Again, some of these are just on this side of being gimmicks. I really do think that the phone being able to lay flat on a surface for taking photos is going to be useful for some. Being able to prop my phone up on a table like a mini-laptop while making a video call on the go also genuinely seems useful!

Tilting the scales towards meaningful

The foldability of our modern all-screen smartphone is the kind of thing that doesn’t make sense… until it does. As these phones inch their way toward something that can be called “polished”, they cross from something that I would instinctively reject as simply not ready to something I have no direct complaints about. They’ve at least crossed over into being worth considering. Will these foldables actually be the “future” of the smartphone? 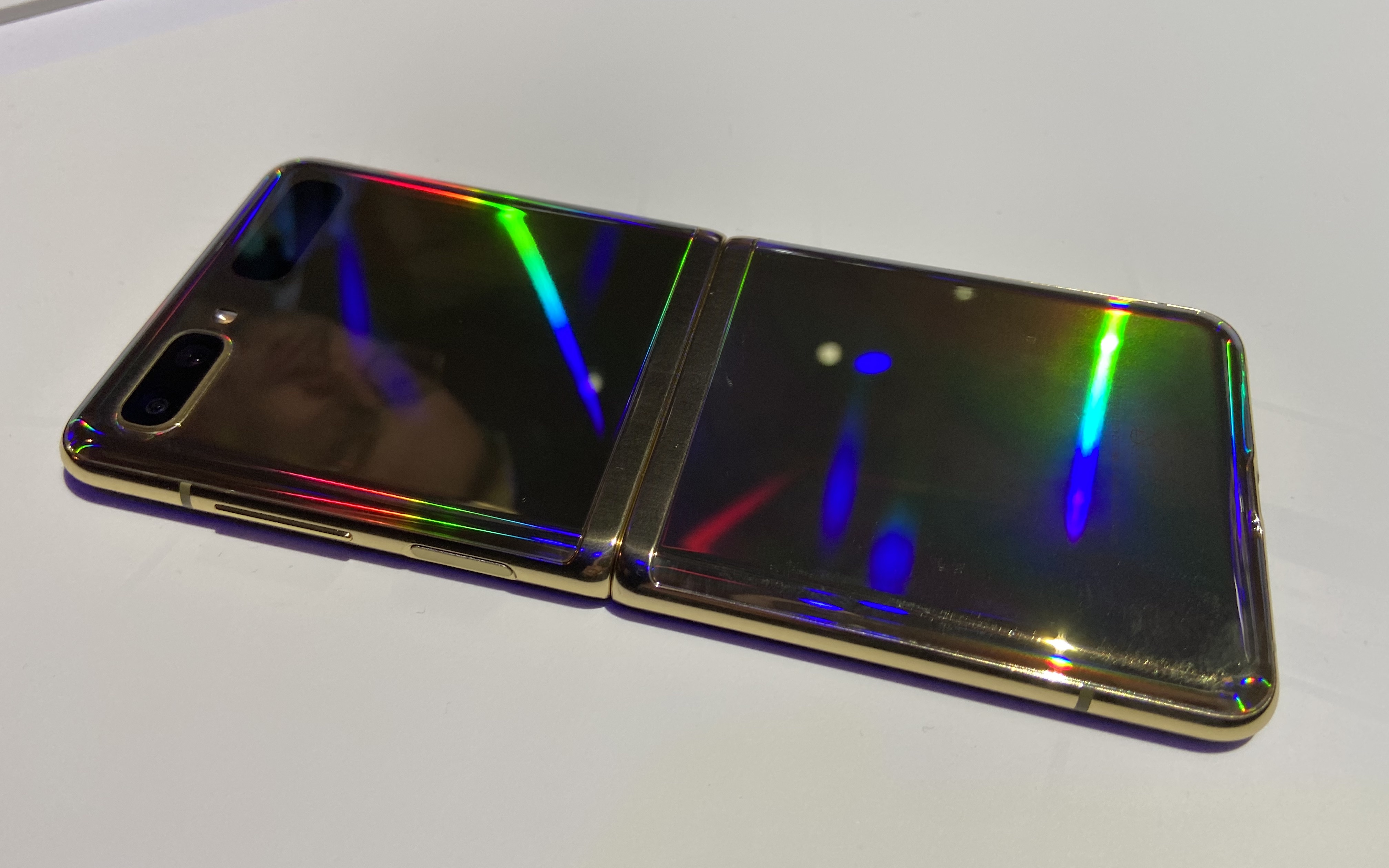 The Z Flip doesn’t exactly signal that foldables are a natural progression, but they’re not a regression, either. For now, they’re a random new manifestation of the all-but-dead “Be together. Not the same.” mantra. Like other unique Android phones, they’re a delightful reprieve from the standard candy-bar-with-latest-specs formula that has dominated the smartphone game for the last several years. They’re a fun toy, and the Z Flip is the best toy yet.

Put another way: The Galaxy Z Flip, while not a sign of a mass slab-smartphone-to-foldable evolution, shows what a practical and unique alternative to that tried-and-true formula could be — one that is probably a genuinely practical purchase for some people. The most obvious demographic: those that would like a smaller phone — whether that’s to fit it in a small bag, smaller-than-average pockets, or otherwise.

With the Z Flip, you can have a phone with a display that’s just as large — or larger — than your average flagship smartphone, all while sporting a folded footprint that’s more in line with the smaller phones of yester-decade. It’s very simple, but I can definitely see the appeal! I really can! And for the Galaxy Fold, which is set to get its second generation this year, you can have a tablet-sized device in the folded size of a small candy bar. I keep finding myself saying that when the Galaxy Fold truly doubles as a full phone-tablet, it will be a form factor game changer. We’re still ways away from that though.

For now, the Galaxy Z Flip is interesting enough to me that I don’t feel I can write off the possibility that foldable smartphones will indeed carry a sizable piece of the smartphone pie in the foreseeable future. It’s the first foldable I’ve used that carries a reasonable enough price tag, a stable and functional enough build, and a small enough number of compromises that I think “hey, there might be something here!” Maybe wait for the reviews, but I wouldn’t call you crazy for picking one up.