During the Galaxy Unpacked event, Samsung has announced that it’s going to deeply integrate Google Duo video calling with its phones starting with the Galaxy S20 and Galaxy Z Flip.

For years now, Google has been driving Duo as a true cross-platform competitor to Apple’s FaceTime, bringing it to devices of all kinds and even web browsers. On the company’s own Pixel phones, Google Duo is deeply integrated into the Contacts, Phone, and Messages apps, allowing you to conveniently switch to a video call with a single tap.

Today, at Galaxy Unpacked, Samsung has announced that their own phones will be gaining a Duo integration of its own, as spotted by our APK Insight team. Just like the Google Pixel line, Samsung phones — starting with the Galaxy S20 and Galaxy Z Flip — will pick up Duo buttons in its Samsung Contacts, Messages, and Phone apps.

Additionally, Google Duo will natively support hardware features of Galaxy phones including the wide angle cameras on the S20 series, allowing more of your friends to squeeze into your video feed. On the Galaxy Z Flip, Google Duo will support a brand new UI that splits the in-call view in half to make the most of the phone’s foldable design. Also, with the extra bandwidth that the Samsung Galaxy S20’s 5G support offers, Google Duo will maximize your video call quality. 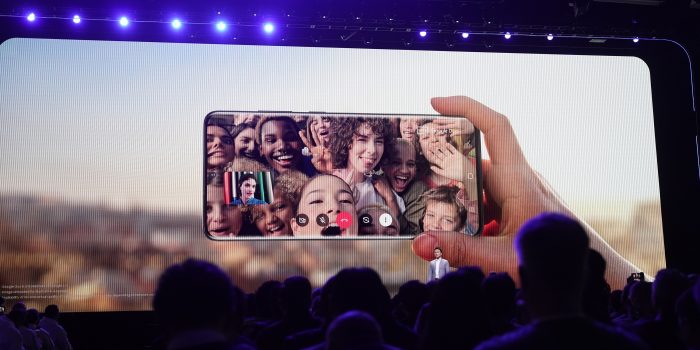 Google’s Hiroshi Lockheimer shared on stage that the Samsung Galaxy S20 will be the first Android device to ship with Android 10’s Live Caption accessibility feature out of the box, which generates captions on-the-fly for both videos and even apps like Google Duo.

Neither Samsung nor Google shared any details on when the Duo integration and Live Caption features will be coming to other Galaxy phones. As the integration into apps like Contacts should primarily be software related, it shouldn’t be long before more Samsung devices are updated to make the most of Duo.