The three-month anniversary of Stadia’s launch today also means that the Pro trial included with Founder’s Edition ends tomorrow for the first players. Ahead of that, the Destiny 2 expansions and an “Upgrade Edition” are now available to buy on Stadia.

Specifically, Destiny 2: Forsaken ($24.99), Destiny 2: Shadowkeep ($34.99) and Destiny 2: Upgrade Edition ($49.99) can be purchased like any other game on the Stadia Store. This was not possible at launch last year and aimed at players not continuing their Stadia Pro subscription tomorrow.

Forsaken: In a high-stakes prison escape, Uldren and his eight Barons took out legendary Hunter, Cayde-6, and unleashed chaos across the Reef.

Shadowkeep: New nightmares have emerged from the shadows of our Moon. Called forth by haunting visions, Eris Morn has returned. Join her to slay these nightmares before they reach out beyond the Moon to cast humanity back into an age of darkness. 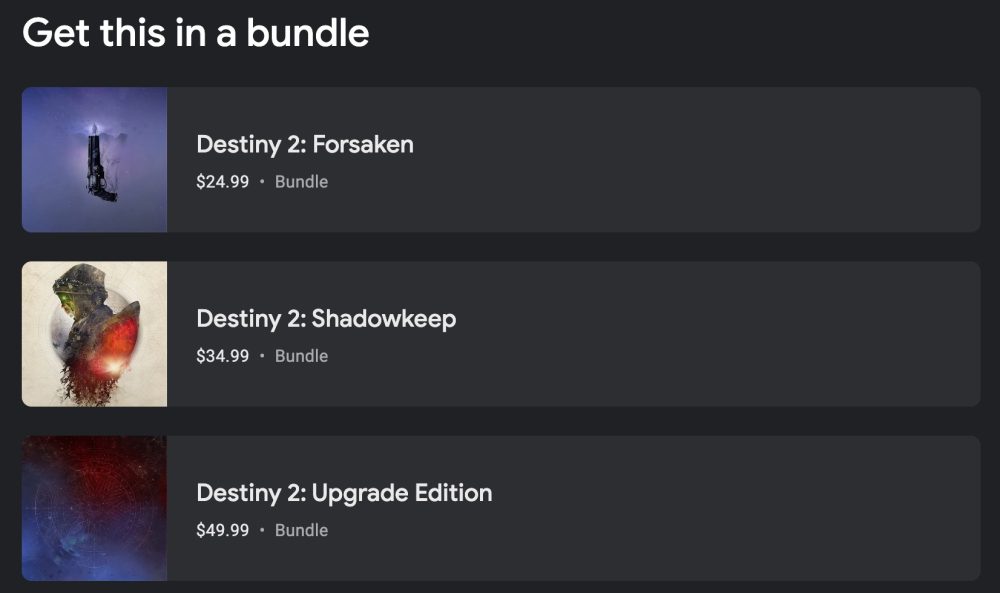 The first expansion is the cheapest way to access the base game — which is free-to-play on all other platforms, while the Upgrade Edition includes everything and is analogous to Destiny 2: The Collection included with the monthly Pro subscription. According to a Google spokesperson, “the base Destiny 2 game is currently not for sale on the Stadia Store.”

Meanwhile, Google today posted an FAQ on “What happens after my 3 free months of Stadia Pro are up?” It goes over a number of scenarios for the first Stadia Base customers tomorrow. The company also reiterates that the ability to “access Stadia for free” is coming over the new few months.

Q: What about my friend that didn’t purchase a Founders/Premiere Edition nor receive a Buddy Pass? When will they be able to play games on Stadia?

A: In the coming months, anyone in our 14 launch countries who didn’t buy a Premiere Edition or receive a buddy pass will be able to access Stadia for free.