Review: Get Packed is a ridiculously fun co-op that shines on Google Stadia 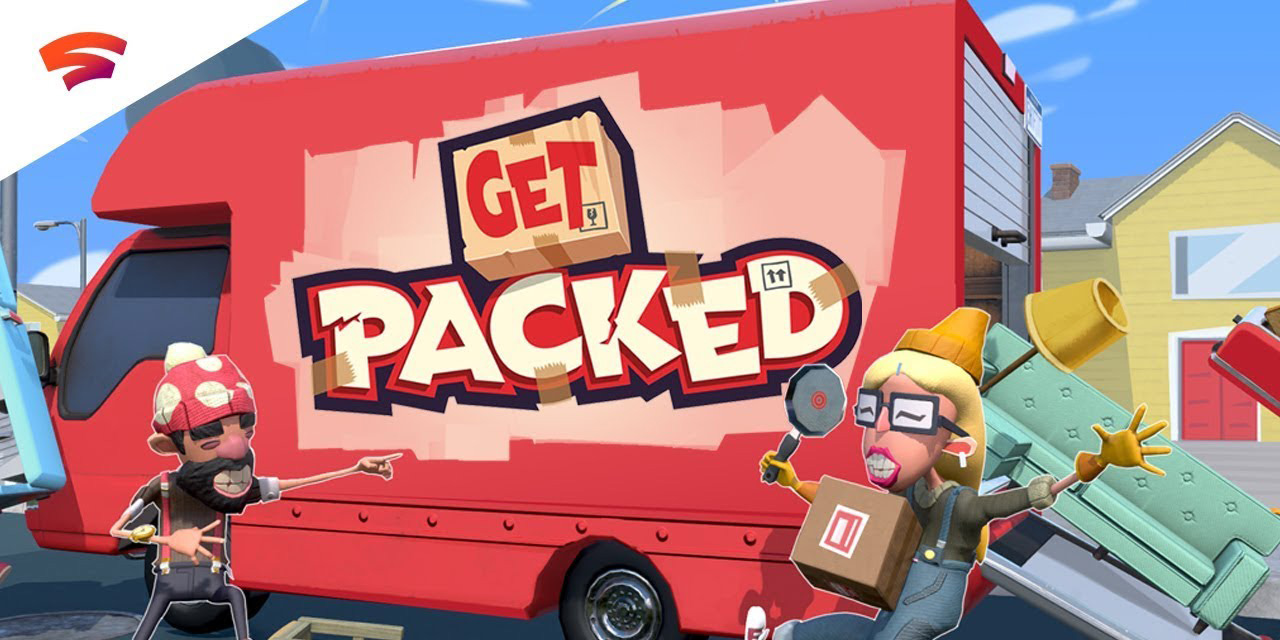 So far, Google Stadia’s cloud platform has been used mainly for online shooters or single-player adventures, but a few months into its life, the platform is adding new experiences for everyone to enjoy. For months, I’ve been waiting for Get Packed to arrive, and I’m happy to report that the game is just as good as I hoped. Let’s dig in.

Get Packed is a co-op game at its core that means to really enjoy it, you’ll need at least two players that can be supplied either from a second controller in your living room or using the game’s online multiplayer. Diving into campaign mode, Get Packed tells the story of the city of “Ditchlington,” a suburban area built on a salt deposit. The plot of the game sees residents of the town brutally evicted from their homes and businesses as “Industrial Salt Co” takes over the entire town.

As a result, a group of friends start moving their belongings away, and over the course of the first few levels, get roped into helping neighbors and eventually starting a small business.

Players have to work together to move items from the houses and buildings into a small truck. It’s easy for players to trap each other inside the truck or send it off with another player, or themselves, also inside. Getting items out of a house can also be tricky at first, often ending with damages and cash off of the total. The ridiculous physics of grabbing items with each arm (which are hilariously longer than real life) make fun for dragging behind you, but also swinging items around you to throw them across the street or into the truck.

Each level lasts three minutes, which makes it difficult to empty an entire house/building, but it feels like a good balance for timing because it adds a sense of urgency.

Levels of Get Packed progress forward in a way that makes the game fun for everyone, but increasingly more challenging. Some levels will absolutely take a try or two to get more than a single star, and on some, you’ll definitely be fired. Still, the gameplay and controls work together to make this all pretty fun!

Each level also has a special objective. This varies depending on the type of building, but the first level challenges you to pack a cat, so that justifies this function on its own. You’ll also pick up achievements as you play, some of which have fun titles like “Hauling Cube!”

Controls in Get Packed are pretty easy, too. The left and right triggers represent your left and right hands. Holding those grabs an item and using the left joystick moves your character with A being used to jump. B can be used to dash and X can “flatpack” an item (turning it into a safely moved, smaller box). This is the only control that took some time to get used to (partially because we’re Nintendo addicts in the Schoon household), but overall, things are pretty simple. The story is a bit different on a keyboard, though. While the controls are remappable, this game is just better suited to a controller.

If you’re at all versed in video games, you’ll pick up the controls for Get Packed within a couple of rounds.

There are two other modes in the game, too — Versus and Destruction.

Versus is a mode that seems like it would be an absolute blast with a group of four friends in the same home. New maps with difficult obstacles see two teams, each with their own truck, trying to empty a house and get the most money from moving items out. 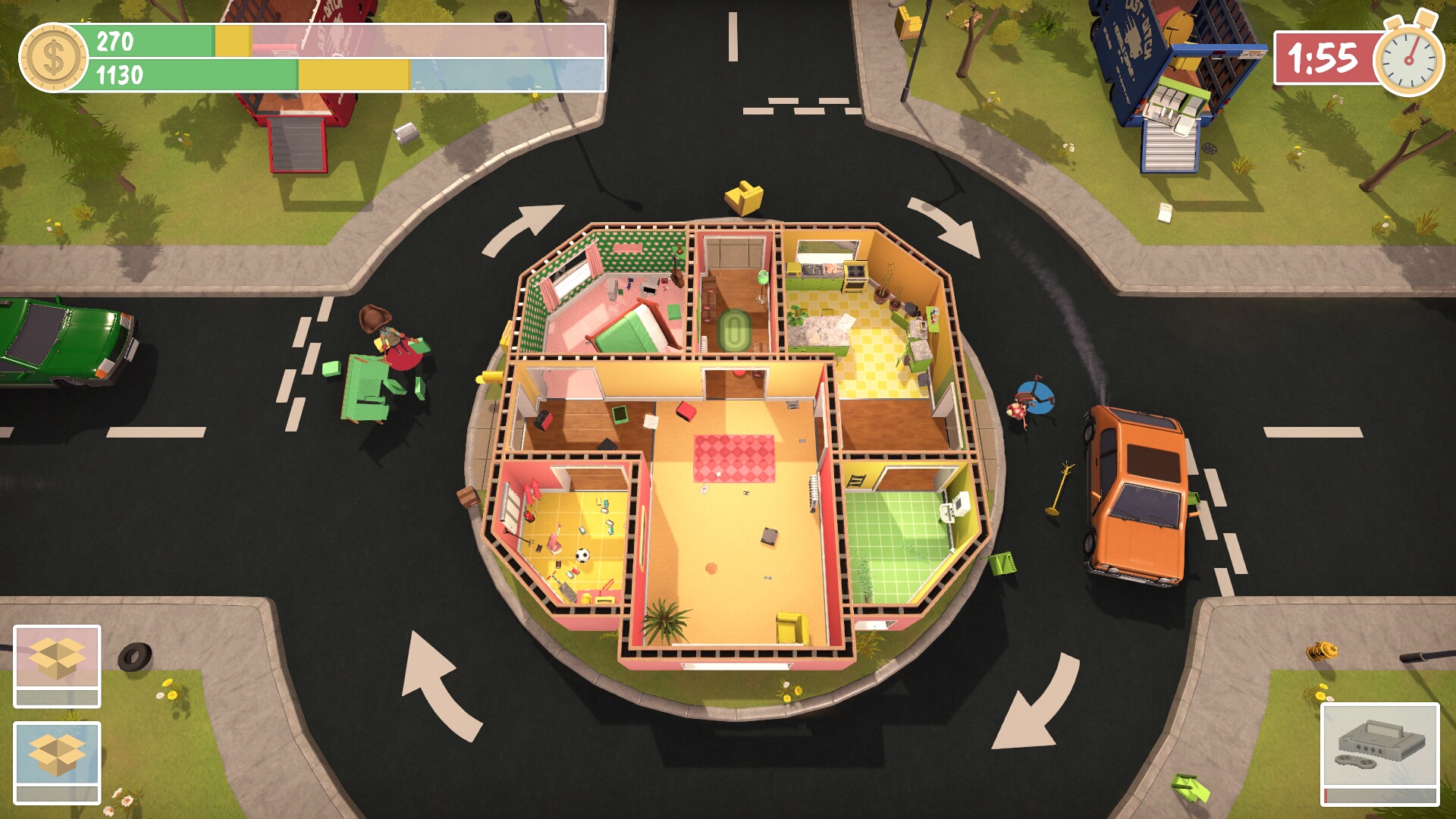 Destruction is also a hilarious way to play this game. Instead of moving items out of the building, you’re sent in to destroy anything and everything in your path. Getting creative with destruction is the key element to this mode. The moving truck, for example, contains kegs and other heavy items that you can bring into the building and swing around to destroy everything. Alternatively, pressing “B” to dash forward is sure to do some damage. 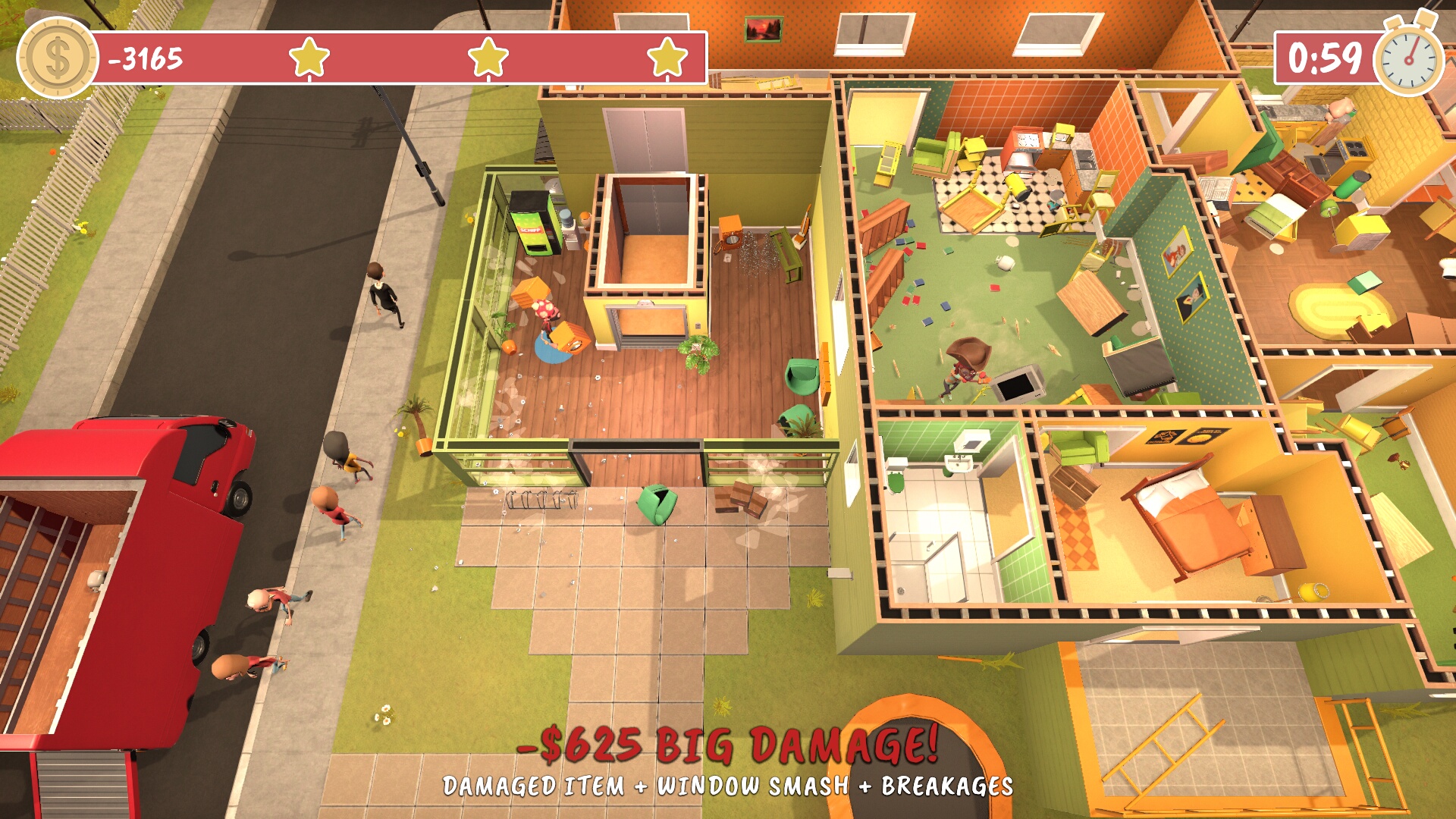 Online multiplayer on Get Packed works pretty well, too, but has a few quirks. I tested the game out with my wife and I on the same local connection, but my colleague Kyle Bradshaw and his wife each used their own copies of the game. That’s required, too, because multiple local players are only available to the host, which is a bit frustrating.

During gameplay, things worked well for the most part, but glitches were relatively common with extra players. Our fourth player, for example, kept reporting weird issues if she was mistakenly shipped off in the moving truck. Notably, the campaign mode doesn’t move forward while using online multiplayer either.

Local multiplayer is where this game really shines, in my opinion. For a couple or a family, this could be an absolute blast up on the big screen. Stadia makes that a bit expensive now since the Chromecast connection only works with a $70 Stadia Controller, but you could always hook up a cheap laptop to the TV and pair controllers with that. That’s the beauty of Stadia, really.

Is Get Packed worth the $20 entry price? I’d say absolutely. If you live with a significant other, children, or even just friends/roommates, you’ll be able to have a blast with your friends with this game. $20 is a very fair price in my opinion, especially since Stadia is now completely free. Get Packed is exclusive to Stadia for the foreseeable future.