Earlier this month, Google Stadia launched its free tier to the public including a two-month trial of Stadia Pro and its library of free games. Since Stadia’s free tier launched, we’ve found that at least one game, Destiny 2, has seen a meteoric rise in player count.

In the video game industry, it’s not common practice to publicize the active number of players your game has, with companies instead pointing to the high number of sales. Instead, player counts found online for games typically use data from the individual platform, with PlayStation and Steam both being common sources. Google Stadia, in its still early state, does not yet offer this kind of information.

Bungie, the developers of Destiny 2, broke from the tradition with, however, by offering an in-depth API for the game. With it, developers can create apps for Destiny and Destiny 2 like inventory managers or ones that offer statistics about the games. One such source, a Discord bot called Charlemagne, offers player counts separated by platform and other info like the game’s most popular weapons.

To that end, Destiny 2, by way of Charlemagne’s data, has become the only loose metric we can use to judge the number of players that Google Stadia may have. Early this year, we used Charlemagne’s data to show that Destiny 2’s average player count on Stadia had dramatically decreased in the days following Stadia’s launch to Founders and Premiere purchasers. As you can see in the chart below, the player count peaked at over 25,000 before dropping down to the 6,000 range. 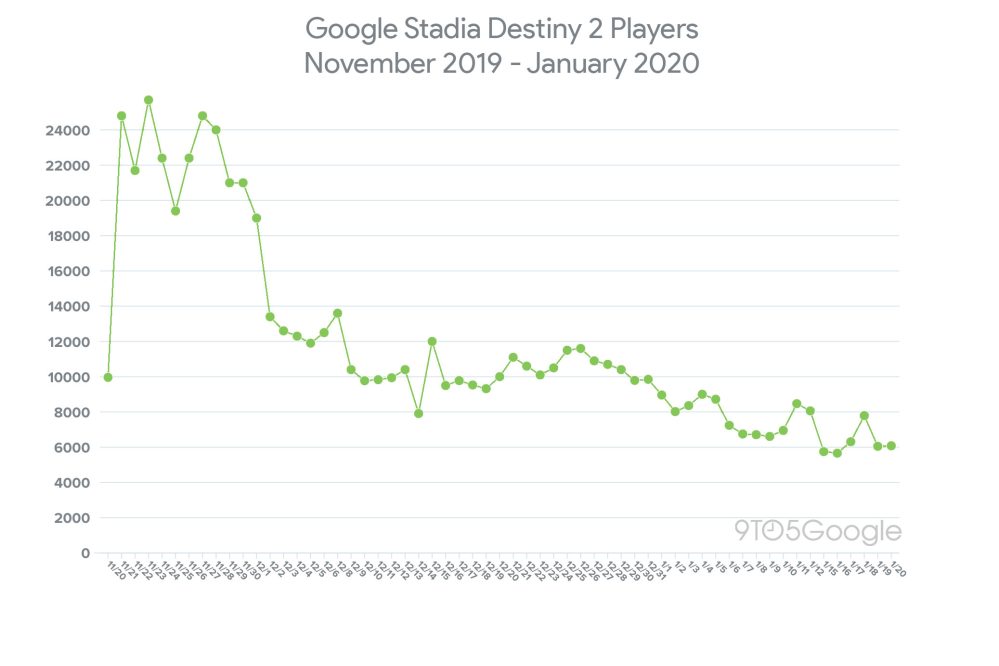 Nearly two weeks ago, Google launched the free tier of Stadia, expanding the platform from just those who had paid or been invited with a “Buddy Pass,” to anyone who wanted to sign up (in one of the 14 supported countries). Part of Google’s public messaging about the launch is that making Stadia Pro free could help the many folks currently staying at home, including a bold promotion on the Google homepage.

But the question is are people actually signing up to play? Thanks to Charlemagne, we have a pretty decent guess.

From the end of March through the first week of April, Destiny 2 on Google Stadia averaged just under 5,500 players. Then, on April 8, the day Stadia first opened its free trial (circled below), the player count immediately increased by nearly 200% to 13,200. However, as Google gradually rolled out Stadia’s free tier launch over 48 hours, the real spike occurred the next day, with over 36,000 players on Destiny 2 on April 9. 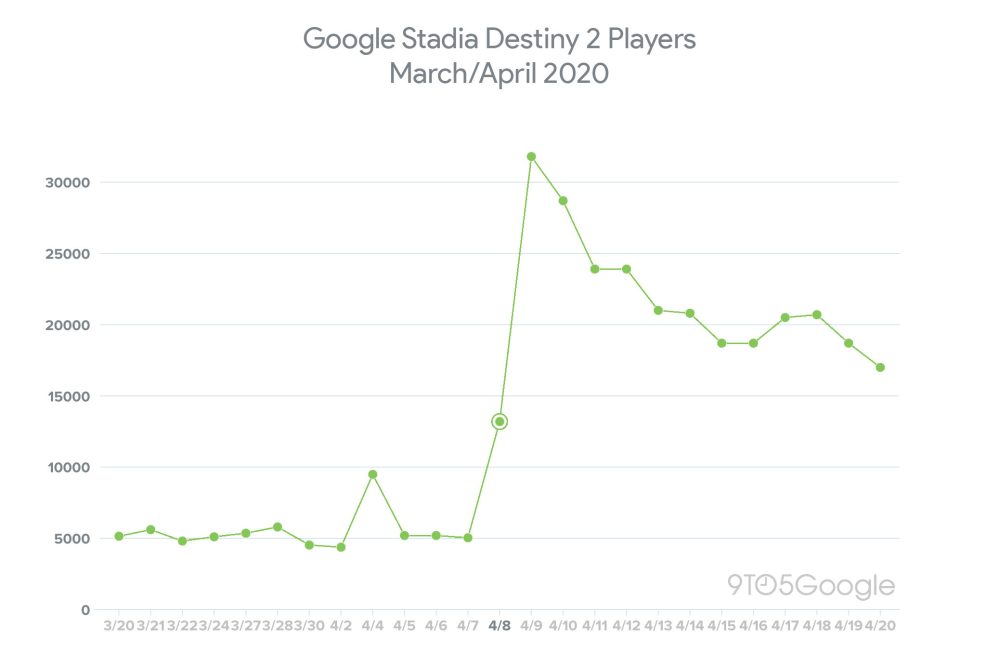 So to put it into real terms, April 9 was the biggest day for Destiny 2 on Google Stadia, garnering nearly 50% more players than its best day during Stadia’s launch week.

Of course, while a big spike like that is to be expected with many people simply using Destiny 2 as a test of whether Google Stadia works on their connection, the more important factor is how many of those players stuck around. In the week and a half since then, the population hasn’t dipped below 17,000, meaning over three times as many people are now playing Destiny 2 on Stadia every day than there were before.

In January, Destiny 2’s matchmaking capabilities were beginning to suffer due to the lack of players on Stadia. While 5500 players a day is enough for some games to get by, many of Destiny’s less popular game modes had extended matchmaking times, if you were able to find a match at all. Now with nearly three times as many daily players, it should be much faster to get into a matchmade game.

Unfortunately, we still can’t infer anything about Google Stadia’s overall player count from Destiny 2 alone, as it’s just one of the nine free games currently offered as part of the free trial. That said, it’s quite promising for the platform’s future how many folks are enjoying Destiny 2 on Stadia enough to keep playing. Surely, the other eight Pro games are seeing similarly increased numbers of players. In time, once folks feel confident that Stadia works on their network, paid multiplayer games like Borderlands 3 and NBA 2K20 could also benefit from a boost in players, reducing matchmaking times.

It should be interesting to see whether Destiny 2’s numbers continue to hold steady, especially once the two-month trial of Stadia Pro runs out. Sadly, for now, there will be no way to know whether players are simply moving on from Destiny 2 to other games or leaving Stadia in general.