Progressive Web Apps are going to be an important part of the web going forward, and Google Chrome has been going all-in on the functionality. Now, with its latest updates, Google is working on a new Chrome setting that launches Progressive Web Apps (PWAs) at startup on your computer.

For many users, having a select few apps launch when they first boot their computer is an important part of their workflow. As a personal example, I have apps like Slack, Discord, and Spotify launch when my Windows desktop first boots up.

Google Chrome is now adding that same option for PWAs. As spotted by TechDows, when you install a new Progressive Web App on Chrome’s latest Canary release, a message appears that asks you if you want to “start app when you sign in to your computer.” Right now, this startup feature for PWAs on Chrome is still under development, and in turn, buried under a flag: chrome://flags/#enable-desktop-pwas-run-on-os-login

Enable installed PWAs to be configured to automatically start when the OS user logs in. — Mac, Windows, Linux, Chrome OS

If you enable this setting and start checking PWAs to run at startup, Chrome will move that PWA to the startup folder on your respective platform. Apparently, this will work on Windows, Mac, Linux, and even Chrome OS. 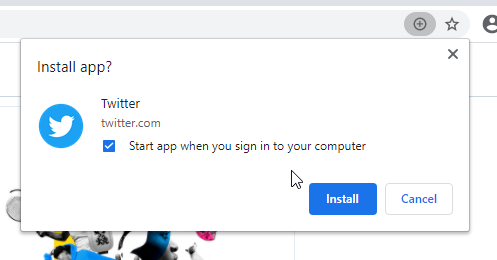 Going forward, this could be really handy for Chrome users! Notably, this idea first showed up in the new Chromium-based Microsoft Edge browser.