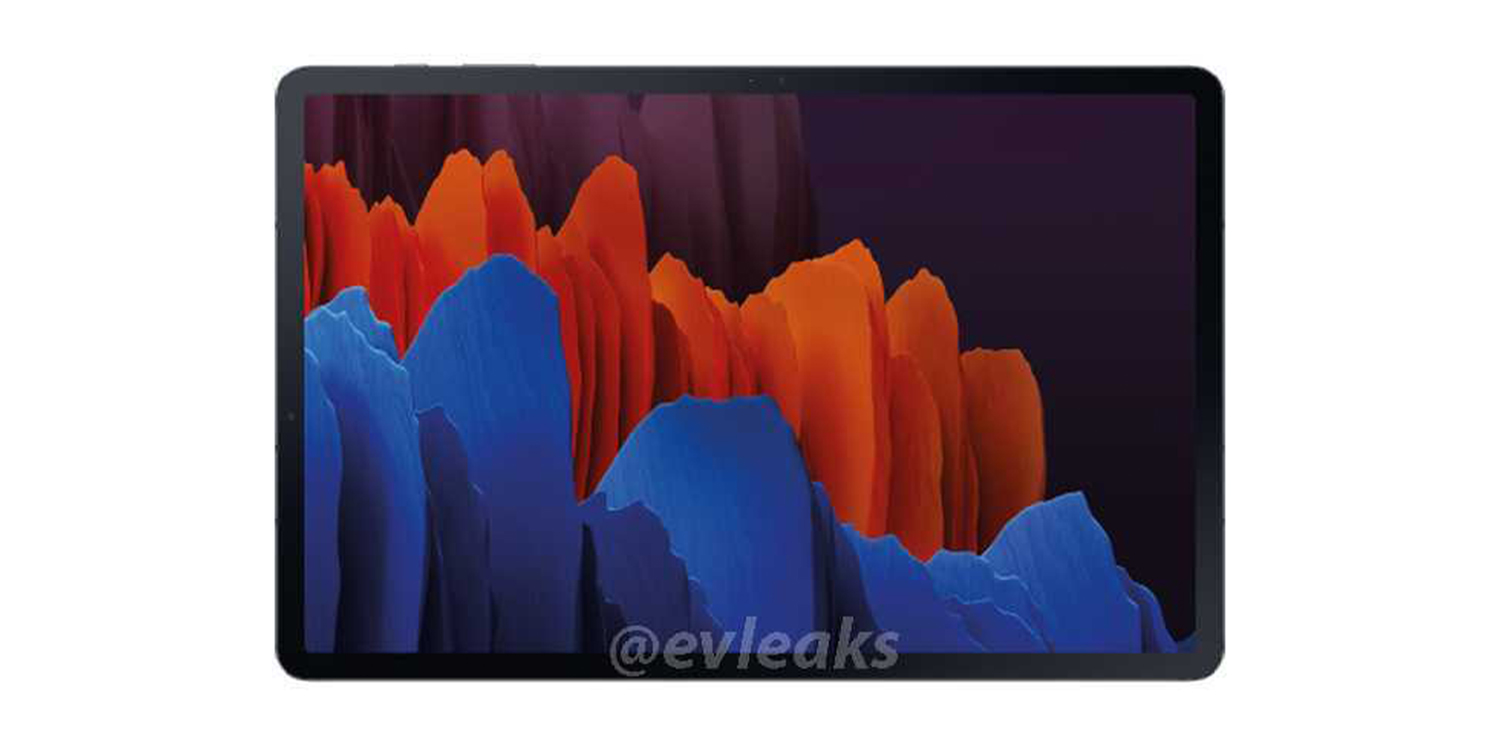 Ahead of the late 2020 Unpacked event, yet more information and details have been leaking on the internet. The latest are renders of the Samsung Galaxy Tab S7, while the Tab S7+ has cropped up in live images.

First, OG leakster Evan Blass has been drip-feeding tech over the last week or so. His latest leak includes renders of the upcoming Galaxy Tab S7. It’s nothing more than a glimpse at the front of the display, which shows a uniform bezel on all sides of the upcoming Android tablet.

We can’t glean a great deal from the solo render shared, but it looks as though the Tab S7 will follow the same design language of previous Galaxy Tab hardware. Previous rumors suggest that the Tab S7 series will come with some impressive internals. Expect to see the Qualcomm Snapdragon 865+ chipset, between 6 and 8GB of RAM, and 128 and 256GB of internal storage. 45W charging will also be available for super-fast battery top-ups.

While the press renders were a nice bonus, thanks to South Korean regulators, we now have a glimpse of the Galaxy Tab S7+ in live images for the first time (via SamMobile). These images shed more light on the renders, with the centrally placed selfie camera being in the “middle” of the bezel when held in landscape orientation.

[Update 08/04]: Evan Blass is at it again ahead of Unpacked with yet more renders of the Galaxy Tab S7 and S7+. This time he has shared the full range of color options for the upcoming Android tablet over on his Twitter account. We’ll get a silver, rose gold, and deep gray option to choose from with distinct wallpapers for each model.

We’ve only got around 24 hours to wait to learn more but for now, this might be the best look — at least for the next few hours. You can check out the high quality renders below:

[Update 07/29]: More renders have been shared by Evan Blass over on his Twitter account, with the new renders showcasing the S Pen, some of the folio keyboard plus what appears to be Halo and a linked Xbox One controller (or similar third-party style gamepad). It doesn’t particularly showcase anything that we didn’t already know. You can check out that latest renders below:

[Update 07/14]: Another render has been shared by Evan Blass over on his paid-for Patreon page, which showcases the Galaxy Tab S7, the folio-style detachable keyboard cover, and even the S Pen gets a brief outing. The renders look eerily like the iPad Pro, with the bottom-firing speakers being particularly similar. You can see that the keyboard cover also has what looks like a touchpad, which means that Samsung clearly is targeting the “laptop replacement” crowd with this latest Android tablet.

We’re led to believe that the Tab S7+ will pack in a 13MP/5MP rear camera setup, 8MP front-facing camera, and an ultrasonic fingerprint sensor.

At the rear, these live images of the Galaxy Tab S7+ show the AKG logo for audio certification, plus the magnetic strip where the S Pen can be stored for safekeeping. We know that the Tab S7 will measure in at 11 inches, while the Tab S7+ will come with a 12.4-inch display. You can get a closer look for yourself below:

Both Android tablets are expected to come with the same internals, and will run the latest version of Samsung’s One UI 2.5. But as is often the case, expect to see even more renders, images, and information on the upcoming Galaxy Tab S7 and S7+ in the build-up to the Galaxy Note 20 series live launch at Unpacked 2020.

Be sure to let us know down in the comments section below what you think of the Galaxy Tab S7 renders and live images.