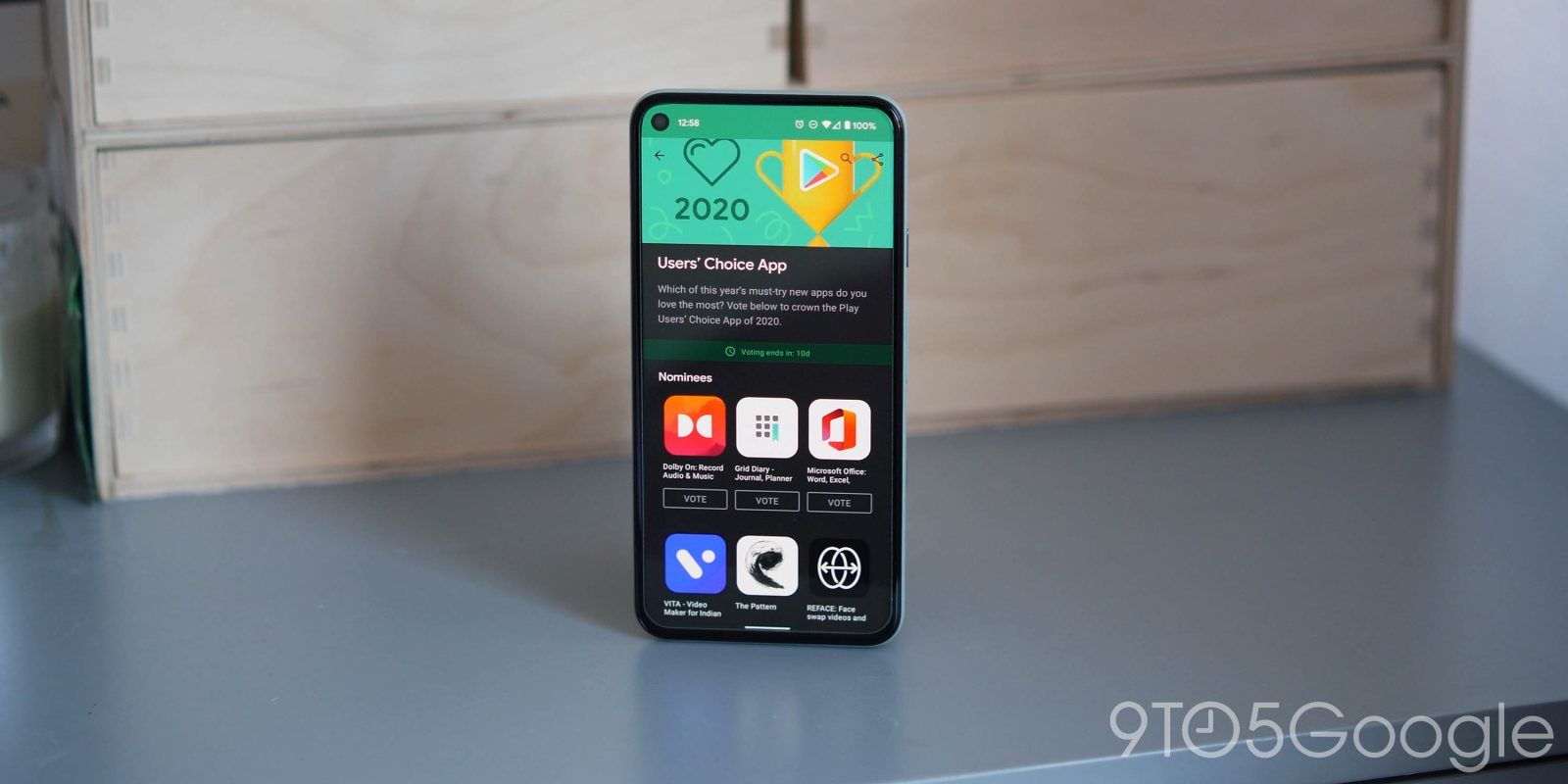 As 2020 comes to a close, Google has now confirmed the shortlist for the Users’ Choice Awards for movies, books, games, and apps.

You’ll probably already have some of the most popular applications inhabiting this list of the “best” of 2020 – although that is definitely open to interpretation. Being polite, there are some really boring and low-effort inclusions that you’ve probably used or seen hundreds of times before. Then again, this isn’t our list, it’s technically yours!

The entire app shortlists for the Google Play Users’ Choice Awards is supposedly determined by what has been considered the “most trending” — and, therefore, may vary slightly region-by-region. Some of the most popular free applications that have appeared on the Trending tab are included, provided they have not won any previous awards. Like we have said, there are some questionable inclusions, but we’ll maybe think about running our own awards at some point soon…

Video — Hands-on with all Google Users’ Choice apps for 2020

Dolby wants to turn your smartphone into a pocket recording studio with this app. I actually think the noise reduction feature is a really neat feature on a mobile application, effectively creating a noise gate for you to help reduce background noise for better audio isolation.

By no means will this turn you into an audio production professional, but it does mean that recording live music or even starting your own podcast is easier than ever before. The suite of added tuning options makes Dolby On one of the few apps from so-called “big” firms that probably does deserve a spot on the Users’ Choice Awards nominations shortlist.

Direct connection to services like Twitch and Soundcloud helps lower the overall barrier of entry. And honestly, the before and after results are usually very impressive considering that all of this is done solely on your smartphone.

This is the kind of app that is what we like to see added to the User’s Choice Awards by Google. Think of Whisk as your personal food prep or meal planner with an intelligent shopping list element — well, that’s how it’s marketed anyway. You can create your own personal cookbook, but instead of having a finite number of recipes, you can add them from practically any site online meaning you have endless recipes in one convenient place.

If you’ve been at home more often or want to start cooking more, having a bank of recipes you like is nice. It’s where the added shopping list function makes Whisk a real killer application for the home cook. Add all the essentials from a recipe to your shopping list and ensure you don’t leave an ingredient behind. Add-in a meal planner and you’ve got the bones of a meal-time organization.

Since the introduction of Google Docs, Microsoft Office has felt like a legacy office software package. Alas, it is still seen as the industry standard and remains one of the best for word processing, presentations, and still the best for datasheets.

Oddly, the second biggest office package on Android is up for a Google Play Users’ Choice Award. Whether the app deserves a nomination will be up to you. This is just the desktop version of one of the planet’s favorite office suites resized for your smartphone. There are some neat mobile-only options like the ability to transform pictures into documents, spreadsheets, and whatnot but overall it’s a solid alternative to Google’s own Workspace suite that includes Docs, Sheets, and Slides.

This is yet another video editing application for mobile videographers but unlike many others — such as Adobe Premiere Rush — VITA is completely free. Although focused on Indian creators, the app is available to everyone with no geo-restrictions.

All the standard editing features are available at your fingertips including slow-motion, speed-ramps, transitions, lower-thirds, text, some basic LUTs, plus you can add Bollywood tunes as a soundtrack. It’s quite feature-packed for a free mobile editing suite but there is a minor downside. Exports are limited to 1080p, which might be a problem for anyone wanting to film in 4K or higher.

I had no idea that it was possible to effectively “map” your personality using just your smartphone but supposedly The Pattern is able to do that. I’m not quite as convinced but with over 1 million app installs it has a nomination in the Users’ Choice Awards for 2020.

The principle is to “find your pattern” — whatever that may be. This is supposed to help you connect and find like-minded people within the app. It sometimes feels like solely a dating app with all the added personality trait questions but if it works for some people so be it.

Personally, trying to assign data to specific personality traits seems like a very flawed concept. But, again, if it works for some people then we suppose it might be worth a try. It’s also worth noting that some of the personality metrics are hidden behind a paywall, which might make The Pattern limited for most people.

Face swap apps on Android have been around for a while, but Reface is easily the most popular of the bunch. Despite some privacy concerns, Reface and apps like it allow you to snap a picture of your face, and then without needing any VFX or After Effects knowledge, you can apply your likeness to any number of celebrities.

It utilizes the sometimes controversial “deepfake” technology that skirts a fine line of copyright infringement at times but being able to put your face onto famous stars of the movie screen might be too hard to pass up. You can export your creations to a multitude of formats including animated GIF and standard video formats.

Chris Hemsworth AKA “Thor” AKA “ridiculously hench Aussie man” thinks you should stop being unfit and decided that you’re only going to be completely shredded following his fitness and diet plan. This is yet another fitness app aimed at helping you reach your workout and fitness goals but with Hemsworth’s admittedly rugged good looks slapped atop — so definitely worth a Users’ Choice Award shortlist place.

There is a 7-day free trial, but it costs $29.99 a month for guidance and fitness advice from personal trainers. If we’re being honest, we’re not entirely sure that Centr can have you looking like Thor but it might be helpful if you lack the motivation to get moving.

Learning a language is now more accessible than ever thanks to numerous services, platforms, and the internet itself. We’re not sure if Speekoo is in any way revolutionary but we guess it tries to make learning another language fun and accessible.

The structure is kind of like a story-walking simulator hybrid — yes, it’s hard to describe. The actual learning element seems pretty good with recall being a big component. The lessons are free, with paid-for tiers offering one-to-one tuition or support from language teachers and experts. When you make progress you unlock videos and other travel tips. It’s an interesting concept but it’s probably only really useful for learning basic conversational skills in up to 6 languages including: Japanese, French, German, Spanish, Chinese, and Italian.

It probably comes as no surprise that one of the newest streaming services with some of the biggest franchises and large marketing budget is hitting the top of app charts around the globe. That said, the Disney+ app deserves to be among the Users’ Choice Awards candidates simply for the excellent Mandalorian.

There isn’t much to it, this is just another streaming app that has all of your favorite Marvel, Disney, and Pixar content in one place. It’s one of the most affordable streaming services too at just $6.99 per month. But you’ll need a subscription to get anything from the app, as there are no freebies from ol’ Mickey.

Another video editor for Android, how original. Snark aside, Vimeo has always been the “professional” hangout for videographers and creatives. Vimeo Create is just a way to create quick, stylish videos for social media. Quite a lot of the “core” features are hidden behind a very high paywall though — and I don’t personally feel the subscription fees are worth it.

There are a few templates that will up your production levels instantly, but you can go all-in and make your own concoctions. You can add fully licensed copyright free music, pay to access stock footage, and it’s really easy to publish directly to your social channels. Desktop syncing might be useful it you just prefer to mess around on your phone and then head to a PC or Mac to finalize a clip.

How can I vote for my favorite app in the Users’ Choice Awards?

So while some of the shortlisted apps for Google’s Users’ Choice Awards are a little bit “obvious” or feel low effort, at least you can have your say on which wins any eventual accolades. You’ll need to head to your respective Google Play Store homepage, where you’ll see a banner ad prompting you to vote for your favorite.  Or you can just visit this link directly, and make sure you are signed in.

It’s also worth noting that there are some slight regional variations too, which means you might not see exactly what US Play Store voters see. So don’t be alarmed if you see some apps that aren’t in our initial roundup.