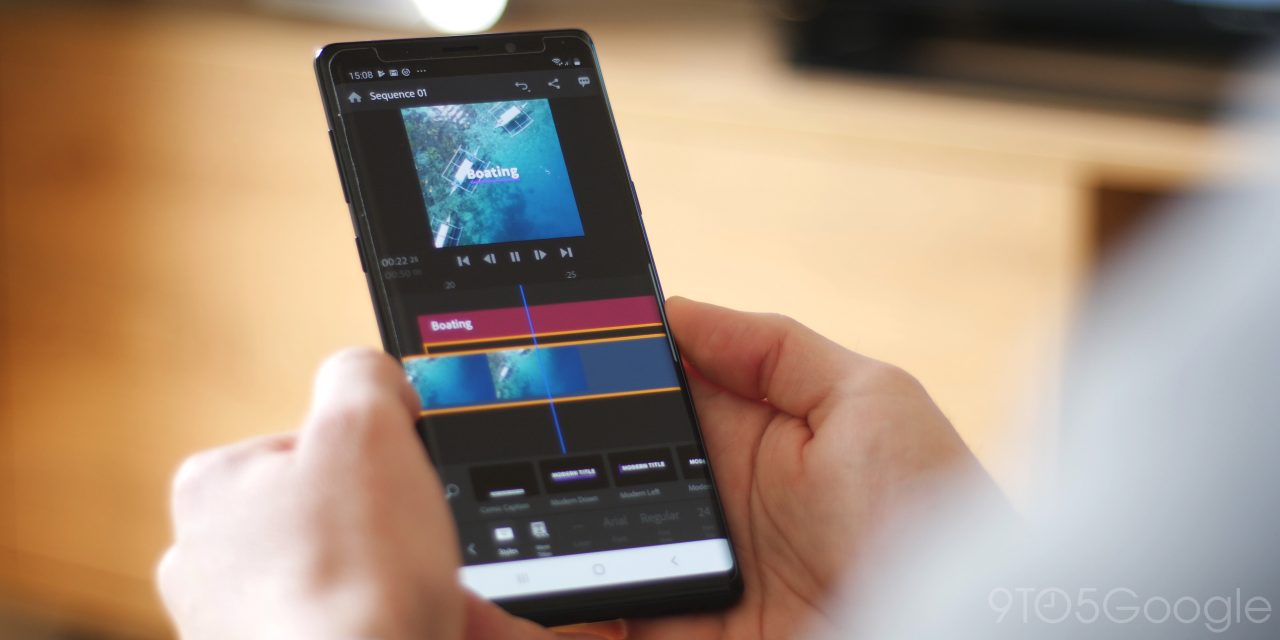 So why is Adobe Premiere Rush coming to Android such a big deal? Well, it offers a slight cut down editing environment that allows for express editing but still retains many tools that most editors find essential from within the full-fledged Adobe Premiere Pro.

For those that edit on the go, maybe want to make a minor step up from other basic options, or social media content creators Adobe Premiere Rush is arguably one of the best options now available on the Android side of the fence.

Sure, Apple users do have the pretty impressive LumaFusion but without the linking and syncing features of the Adobe Creative Cloud, it just isn’t quite the ‘full’ experience it claims to be. Being able to shoot, edit and upload all from one device is pretty awesome.

That said, LumaFusion does have support for the Apple Pencil, whereas Adobe Premiere Rush offers a full touch interface. It is any good though for $10 a month?

Straight away, as a Premiere Pro user, I find the cut-down interface pretty refreshing. You’re not bogged down by a wealth of choices or controls that you may never use on a regular basis.

I will say that I miss the ability to use a mouse straight away. Fine control with touch controls isn’t quite the same when you want intricate selections. Adobe has done a good job of translating mouse-based controls to a mainly touchscreen interface though.

The fact that you get the same interface on Android as you do on the Adobe Premiere Rush desktop app means a smoother transition across devices. Being comfortable in one working environment means you’re set within another. There is a much softer learning curve on this version of Premiere too, as it’s streamlined to help you create videos quickly and without bogging you down in the underlying processes.

Saving files to the cloud via the Adobe Cloud gives you the ability to quickly switch between desktop and mobile without the associated janky workarounds too. You’re not limited to saving to the cloud though, as being able to save to your local storage is also par for the course. 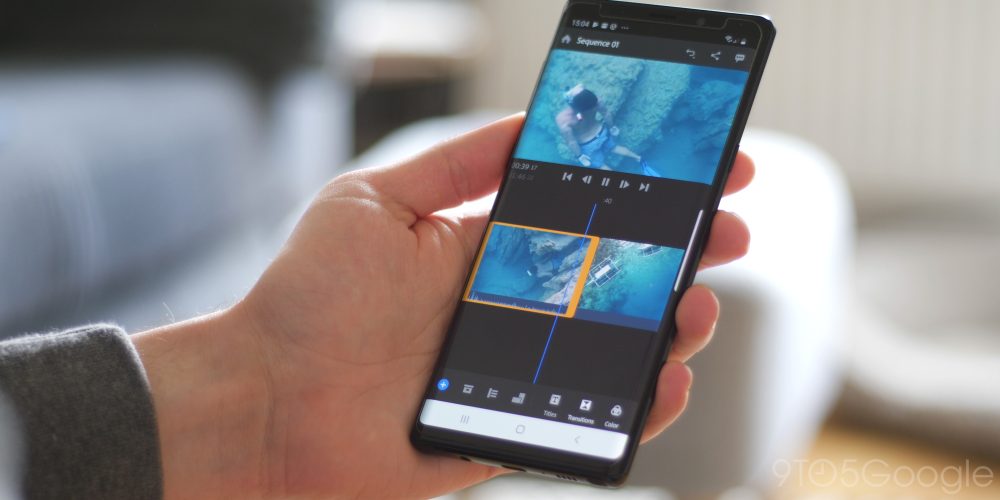 Rush is really simple to use from the get-go. You can shoot video from within the app, which can then be placed right on your timeline. The main timeline offers a couple of views, if you’ve ever used Premiere Pro (or any other editing software for that matter) you can activate multiple track views. This gives you greater fine control than simply dragging and dropping.

Being able to visualize your timeline is also great for novices, as you can see each portion of the video track you’ve added or adjusted. From here you can add footage quickly from your camera roll, Creative Cloud online vault or directly from your camera lens.

Adding motion graphics and titles is about as easy as it gets. There is a small selection of titles to choose from, that you can tweak and edit to your heart’s content. What I do like is the inclusion of the ‘Subscribe’ and social media specific lower thirds and animated titles.

Stock transitions are also a breeze to use. There are a number of downloadable options that come with the Adobe Stock package included too. My advice would be: don’t overdo it on transitions.

The wealth of powerful noise reduction and audio controls are great, but I wouldn’t suggest cranking up the ‘Noise Reduction’ unless you want audio that is spikey and misshapen.

What I also find pretty neat is the ability to add a voiceover straight from a video track. For quick explainer videos that is a really powerful tool, although your audio will be determined by the quality of your smartphone microphone. 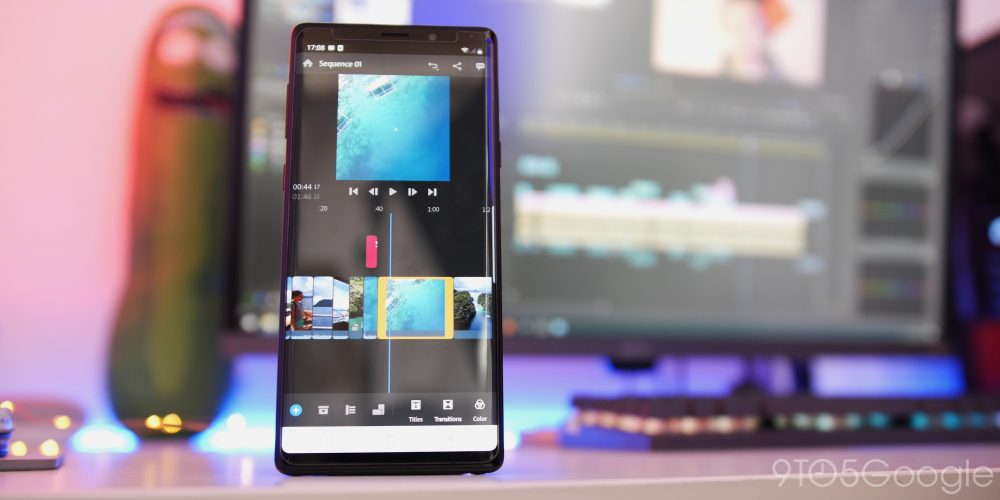 There isn’t a great deal of output option to choose from, but you are able to render out your video in either landscape, portrait or even in square video format.

Adobe included export profiles specifically optimized for each platform too, which streamlines the process yet further still. Editing a 4K timeline is possible but not something I would suggest as exports are limited to 1080p on some devices, at a maximum of 30 frames per second.

For reference, those with the Snapdragon Galaxy S9, S9+ and Note 9 will be limited to 1080p exports at present. Meanwhile, those with Exynos variants of these handsets are capable of exporting at 4K up to 60fps. If you have a Pixel 2, Pixel 3 or Galaxy S10, you can edit and export in 4K 60fps too.

One more thing to note is that Rush CC will adapt to your first file import. So if you have mixed media and import a 1080p file first, then import a 4K file, your maximum output will be 1080p at 30fps. That is import to note, as I personally have experienced this issue myself.

The rendering process isn’t instant. A short 2-minute timeline would take a couple of minutes to render out completely at 1080p 30fps. The file size will vary, but for reference, a 1080p timeline for one minute should end up being approximately 50MB. That size does decrease with portrait and square video though.

Now, this is a tough question to answer. Adobe Premiere Rush as a standalone Android application at $9.99 per month is a tough sell. If you only edit the odd video here and there, it really isn’t worth the price of four cups of coffee.

For anyone that wants to take their videos and editing a little more seriously, this might prove to provide better value. Given that you can shoot and edit directly on one timeline, you can add more flair to your Instagram, Twitter, and Facebook videos without confusing interfaces and a steep learning curve.

If you have access to a decently powered PC, laptop or Mac, then I can’t say Adobe Rush is a great solo option for aspiring video editors. Instead, as a tool for creating short videos for social channels or vacation montages, it’s arguably one of the best tools out there.

The fact that Samsung devices get a monthly discount and optimized performance thanks to direct with Adobe is yet one bonus for Android users. I tested the application on both a OnePlus 6T and a Samsung Galaxy Note 9, and it was clear that the performance was far superior on the Note 9. It also helped that the S-Pen allows for extra fine control when working on the timeline.

As a gateway into video editing proper, Adobe Premiere Rush on Android is a solid entry point but don’t go in thinking you can create feature-length movies and you won’t leave disappointed.

In terms of cost, you can get the application as a standalone Premiere Rush for just $9.99 per month or as part of the full Adobe Creative Cloud Suite at no extra cost — with plans starting at $52.99 per month. The app also comes with 100GB of CC storage, with additional storage options of up to 10TB also available for purchase. You can download Adobe Premiere Rush for your Android phone on the Google Play Store right now.