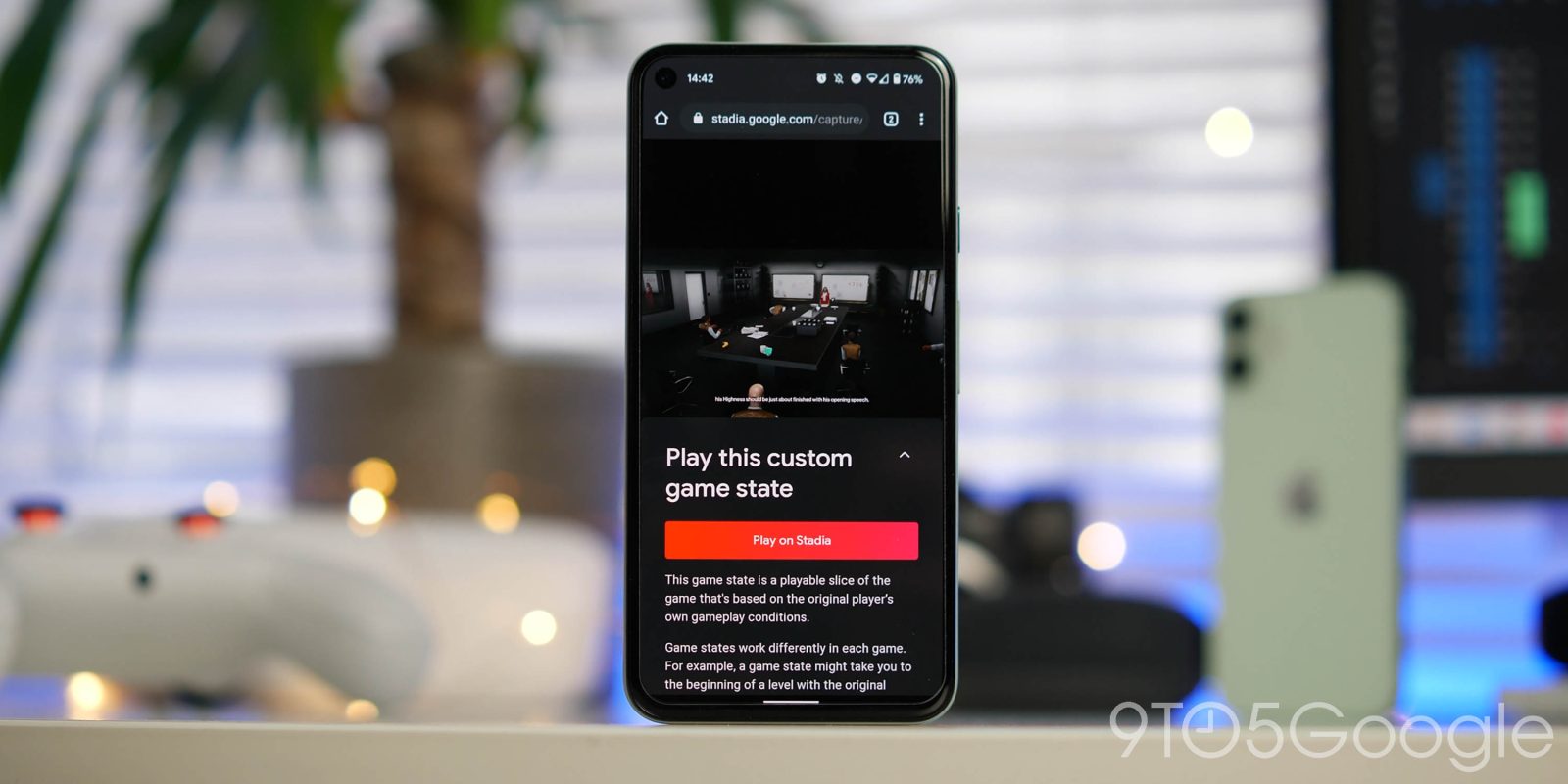 After a pretty minor rollout that turned out to be a beta test for State Share on Stadia with Crayta, the potentially game-changing platform feature has arrived in full with the release of Hitman 3 — and we have spent a few days getting to know it better.

Effectively, at the moment, the ability to challenge your friends in certain types of game or specific gaming scenarios relies heavily on creating a level playing field. State Share on Google Stadia allows you to effectively “save” a point in a game within a snapshot of said game.

For instance, in the new Hitman game, you can take a screenshot that acts as a snapshot with all your inventory items and some wider in-game progress contained within it – think unlockables rather than level progression.

Now, say I reach a certain portion of a level or challenge and want to see how my friends get on, I can just take a screenshot or capture a clip, send the link, and, voila, if they want to play from the same point in time with all of my progress intact, they can. Well, not quite just yet. The tech is there, but it’s up to the developer as to how to enable or implement the feature.

If you are a solitary gamer, this probably isn’t a big deal. However, it opens up challenges for the wider gaming community — especially streamers for instance. A “Let’s Play” turns into a game that you can actually play along with with all the same progress.

For speedrunners especially, this creates a level playing field without the need for modified save files or having to start a game from the same point every single time. Depending on how Stadia as a gaming platform develops with regard to player base and game library, this could be one of the most underrated additions to any service out there.

Not only that but if you are not a fan of using the sometimes slow saving systems in games or hate autosave messing up a “perfect run,” you can add some trial and error to your gameplay simply by taking a screenshot. It may also make the act of solving certain in-game puzzles easier, as you can share your progress with a friend and, in essence, replicate passing the gamepad to play through certain titles in tandem.

Well, during our initial testing period the feature worked as IO Interactive intended. The developers have implemented the State Share feature in a way that will generate a game state at a certain level starting point within Hitman 3 rather than launch at the point a screenshot or clip happened to be shared from or within. However, much of this testing did coincide with IO Interactive effectively taking the game “offline” to prepare the feature fully for a wider rollout.

The only other game out there to offer State Share features is that of Crayta, which was in beta but in reality felt like souped-up game invites using a URL and not the simplicity of a screenshot sharing mechanism. Obviously, that was the early stages of the feature, making this the “true” release of the option to jump directly into — what amounts to — someone else’s game save.

So any time you take a screenshot in the game, the exact starting scenario is saved within the capture. Meaning that the further you progress within the game and unlock pre-level extras, new conditions and wider in-game progression are held within an image or clip that you can share with whomever you want.

Our only concern is that taking a screenshot or in-game clip will automatically utilize State Share features, and you need to use Stadia in a desktop browser to toggle the option to allow another player to activate the “Play” option when sharing. This does slow things down a little, and we hope that this won’t be the case forever. You can use your mobile browser in “Desktop mode” to toggle the option though, which is a little bit hacky, but it does work.

A working State Share-enabled link on Hitman 1, 2 or 3 should take you directly to the start of a level at a completely different starting point, with a disguise applied, and a number of key in-game items already in your inventory. This feature allows you to access options not available unless you complete certain levels while also finishing selected in-game challenges, but with State Share, you have the ability to dive in right in. Provided you have access to the game and the right link/screenshot, you should be able to complete the level with in-game loot right there in your inventory when loading up/starting a level.

The benefit is that you’re effectively getting a head start without needing to go through the arduous process of finishing the level in question. You also can play this snapshot in isolation, meaning any progress you make does not affect the original account or saved state.

Given the challenge elements of the Hitman series, this might prove to be a big draw for the competitive player, effectively creating unique start points for you to share and challenge your friends to complete. Or for those maybe not quite as good as their friends, getting an easier start position.

While on face value that might be disappointing to hear that this isn’t a complete “state” ready to be played, it’s early tentative steps within a game that will hopefully encourage more community play with options that won’t be available in other platform versions of the game.

Now if future builds are able to teleport you to a specific scenario you have found yourself in, as Google hinted that developers can implement, this really could be one of the killer features Stadia has over every other platform out there. At the moment, State Share feels much like Stadia itself, on the cusp of something special but just ever-so-slightly undercooked.