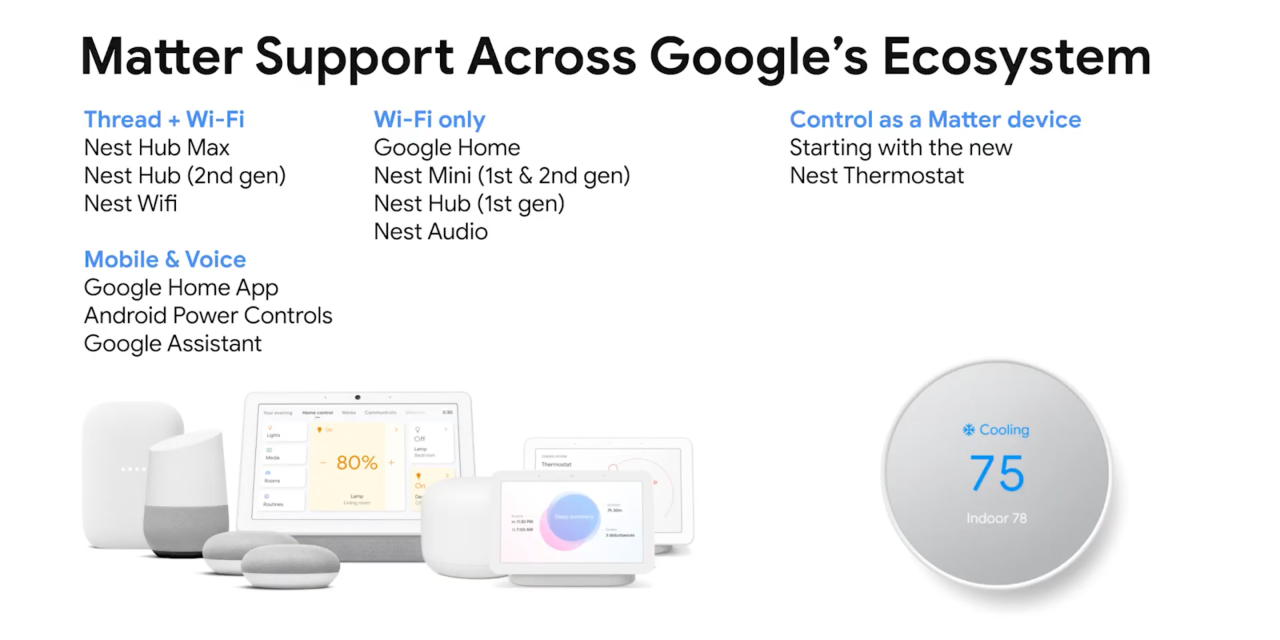 Just last week, Project Connected Home over IP (CHIP) was rebranded ahead of the first devices launching later this year. Google, at I/O 2021, announced support for Matter on Android and Google Nest devices.

Matter provides one standard so that all smart home devices can support assistants from Google, Amazon, and Apple. The protocol runs on Ethernet (802.3), Wi-Fi (802.11), and Thread (802.15.4), while Bluetooth Low Energy is supported for setup.

You’ll only need a few taps to set up your Matter devices, and you’ll have lots of ways to instantly control them such as Matter-enabled Android apps, Google Assistant, the Google Home app, Android Power Controls and compatible Google devices. It also allows over one billion Android devices to enable simple setup and control all Matter-certified products.

Meanwhile, the Nest Wifi, Nest Hub Max, and 2nd-gen Nest Hub, which all feature Thread radios, will be certified as Matter connection points/hubs for stronger and faster accessory connections. Additionally, all Nest Smart Display and speakers (including those with just Wi-Fi) will be able to control Matter devices, while Matter support will allow the latest Nest Thermostat to be controlled by other supported platforms.

Outside of the Matter for Android and Nest announcement, Google also detailed WebRTC support for audio/video streaming from security cameras or video doorbells to Nest Hub and phones. This allows for 50-80% improvements in latency. Google also now has a smart home directory to find compatible products.

Top device manufacturers, including Arlo, Logitech, Netatmo and Wyze, are among our first partners to integrate WebRTC with Google Assistant and more will join in the coming weeks.