Samsung Galaxy A52 5G review: All the bells and some of the whistles [Video] 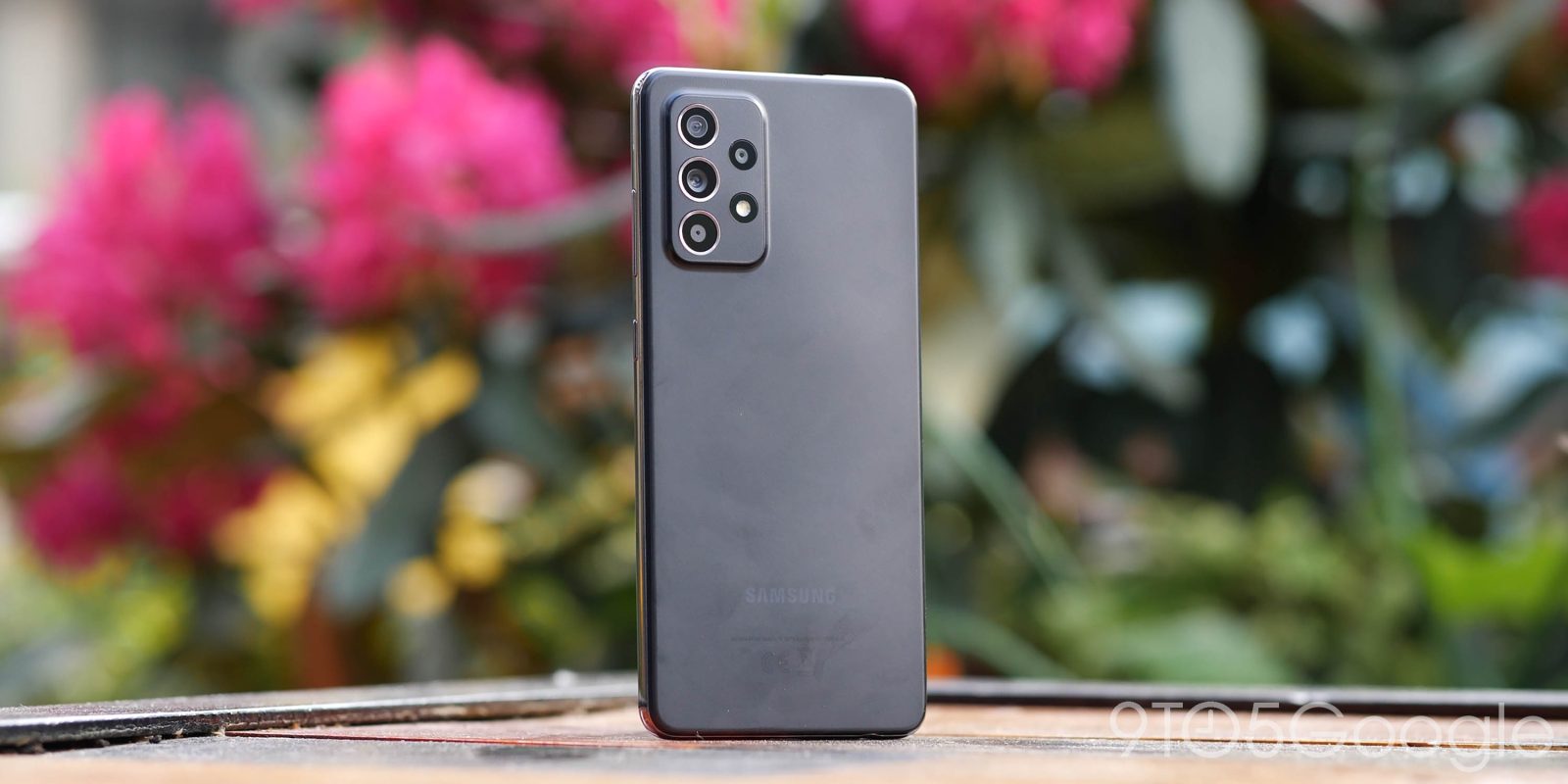 Samsung’s foray into the the affordable spectrum has improved year-over-year, and the Galaxy A52 5G might be the best of the bunch.

The growing market of good affordable Android phones means it’s now easier than ever to get just about everything you could “need” without having to break the bank. Samsung’s A-series has blanketed the mid to low end with smartphones in just about every conceivable price bracket, and right in the middle sits the Galaxy A52.

I have to say right up top that the fit and finish on the Galaxy A52 isn’t to the standards that I expected. Now that isn’t to say this phone feels bad, it just feels “different” to the kinds of Samsung devices that I think many people have become accustomed to.

It’s boxy and flat, and you can feel the plastic side rails and rear panel right away. It’s noticeable how warm to the touch the plastic is compared to the cold feel of glass and metal. The side buttons feel good and are extra clicky when pressed and activated, but the SIM card tray is not flush with the outer bezel and that feels poor. This is exacerbated by the seam between each side of the display and rear panel.

I get that it aides grip, but it’s a very strange feeling when most phones — even at the low-end — now have softly curved backplates to alleviate this. If you prefer not keeping a case on your device, I can see how this would be welcome. For me, I’m still not entirely sure, but it does aide grip I suppose.

What surprised me most was how hefty the Galaxy A52 feels when you first pick it up. It’s not overly heavy but neither is it quite as light as I expected. That’s definitely a good thing as the entire package is firm, resolute, and well-packed, although if you tap the plastic backplate, it has that flex and somewhat hollow sound that plastic can exude — even though it obviously isn’t.

The overall package is modeled or at least based upon the Galaxy S21 and Note 20 series, then toned down to account for the lower cost. It’s easy to distinguish up close, but from far away the design is close enough to deceive most people I’m sure. A big bonus over other affordable Android devices is the added IP67 water and dust rating here, and there’s even a headphone port if you want wired audio.

At 6.5 inches, the Super AMOLED display is the biggest and most important component of the A52 hardware packge. It’s FHD+, which garners a big checkmark in the “good” column. That’s not all, as it also has a 120Hz refresh rate, which is the real pièce de résistance. Right out of the box this panel is set to this higher refresh rate, and it helps ease you in and allows you to enjoy a smoother UI experience.

The central punch-hole has been chipped and clipped down to the point that it feels almost nonexistent. I’ve just thoroughly enjoyed using this display. As any good Samsung screen should, it gets nice and bright, makes text and images look crisp and sharp, plus the bezels are fairly small, all things considered.

Any and all content I’ve consumed using the Galaxy A52 display has been absolutely fine. Viewing angles are great and the ever-so-slightly larger side bezels — at the top and bottom of the display — mean that accidental touches and taps don’t pose a problem when viewing videos in landscape mode. When you consider the price, this is among one of the best displays on a sub-$500 smartphone. Heck, it’s better than some that exceed the $500 asking fee, and that can’t always be said of affordable phones.

On top of the glowing review of the display, I’ll also add that I have been fairly happy with the in-display fingerprint scanner. When you line your thumb or finger up correctly, it’s fast and accurate. Wet hands can pose a problem but the placement is pretty good — it’s not too high, nor is it too low.

Very much the OnePlus Nord CE, I have found that the Galaxy A52 is a perfectly fine performer, so long as you don’t push it too far and stick to the “basics.” To recap: that means general texting, browsing, some light 2D gaming, and taking and editing photos. Beyond this short list, if you want to do more, this might not be the device for you. The Qualcomm Snapdragon 750G is fairly solid, but it’s not meant to be pushed too hard.

Try to do too much and the A52 can get bogged down when trying to do lots of things simultaneously. What I mean is that you can see some lag if you are trying to multitask, and I think that is more evident with the higher refresh rate display. You can see frame dips when things are catching up. That said, it isn’t something you’ll encounter too often if you stay in the sweet spot of usage.

I will say that One UI 3.1 doesn’t seem to get in the way quite as much as older versions. The 120Hz refresh rate does enhance the experience — so long as you don’t encounter some slow patches. A big bonus here is that Samsung has committed to at least three years of software updates, too. So no need to worry about getting updated to the latest software version.

Even with the power-sapping 120Hz refresh rate enabled, in my experience, the battery life on the Galaxy A52 has been very solid. Without too much exertion, two days of moderate usage like sporadic WhatsApp usage, some social media scrolling, and the odd YouTube video proved a breeze for the 4,500mAh internal cell.

On a few days I pushed harder with lots of 5G usage and photography sessions, and a full day of lifespan seemed to be similarly easy to attain. Although a metric I’m not an active fan of simply due to different usage patterns, I saw Screen-on time hover around the six-hour mark when using the A52 as my default device.

Topping up is, as you’d expect, a little slower than most high-end phones. Even though the Galaxy A52 supports 25W charging, it ships with an 18W charger in the box. It takes a couple of hours to resuscitate a dead device back up to 100%.

We’re working with a quad-camera setup on the Galaxy A52 5G. The good news is that two of these are consistent and produce good still images. Somewhat fortuitously, the two good lenses include the 64-megapixel main sensor, and ultra-wide holds up well against similarly stacked smartphones.

Images taken with the main sensor after pixel-binning drop from 64 to 16 megapixels. The sharpness, contrast, and colors are very good. Samsung has toned down saturation levels in recent years, which helps ensure the Galaxy A52 is more accurately reproducing scenes. There is still a vibrancy to images that screams “a Samsung took this photo,” but this isn’t necessarily a negative like it was in the past.

Even in low light, you’ll get some solid stills here. Sure, images can have a slight yellow color-cast, but when the light begins to dim, you can still get some good photos. The camera is good if you stick to the two best lenses and outright avoid the macro lens, it’s fun for a few minutes and then you realize just how useless an addition this added focal length is on a smartphone. I’m not entirely sure to what level the 5-megapixel depth sensor helps, but portrait effects and edge detection on the Galaxy A52 proves to be solid too.

With just enough of a taste of what makes the top-tier Galaxy S series so popular, the Galaxy A52 5G happens to be a great affordable Samsung smartphone for just about anyone not concerned with having the highest-end experience. My only concern is the base retail pricing, which in some markets is a little higher than some of the competition.

It has one of the best sub-$500 smartphone displays, and promises prompt software updates and support. You get 5G connectivity out of the box, plus there’s a lot to love with One UI 3.1 and all of the added extras. The Galaxy A52 5G manages to pull the Pixel 4a 5G back into focus as this devices biggest outright competition in North American markets. The Pixel comes with a marginally faster chipset, similar update lifespan, but it has a far better overall camera and software experience. Sure, an IP rating and a far better display is a big bonus in the A52’s favor, but it’s a very tight competition for your hard-earned money.

There’s also the heavily discounted Galaxy S20 FE and even the recently released OnePlus Nord CE to contend with. The former is still one of the best value packages around and likely the one I would track down if I wanted an affordable Android with a flagship-level experience. That said, the Galaxy A52 5G is yet another great A-series Samsung that doesn’t disappoint in many areas and does more than enough “right” to make it worth a look. That is provided you can get it at a discount.

Where can I get the Samsung Galaxy A52 5G?

There are tons of online and offline retailers that offer the Galaxy A52 5G. It retails for $499.99 and is available from Amazon, Best Buy, and Samsung direct.