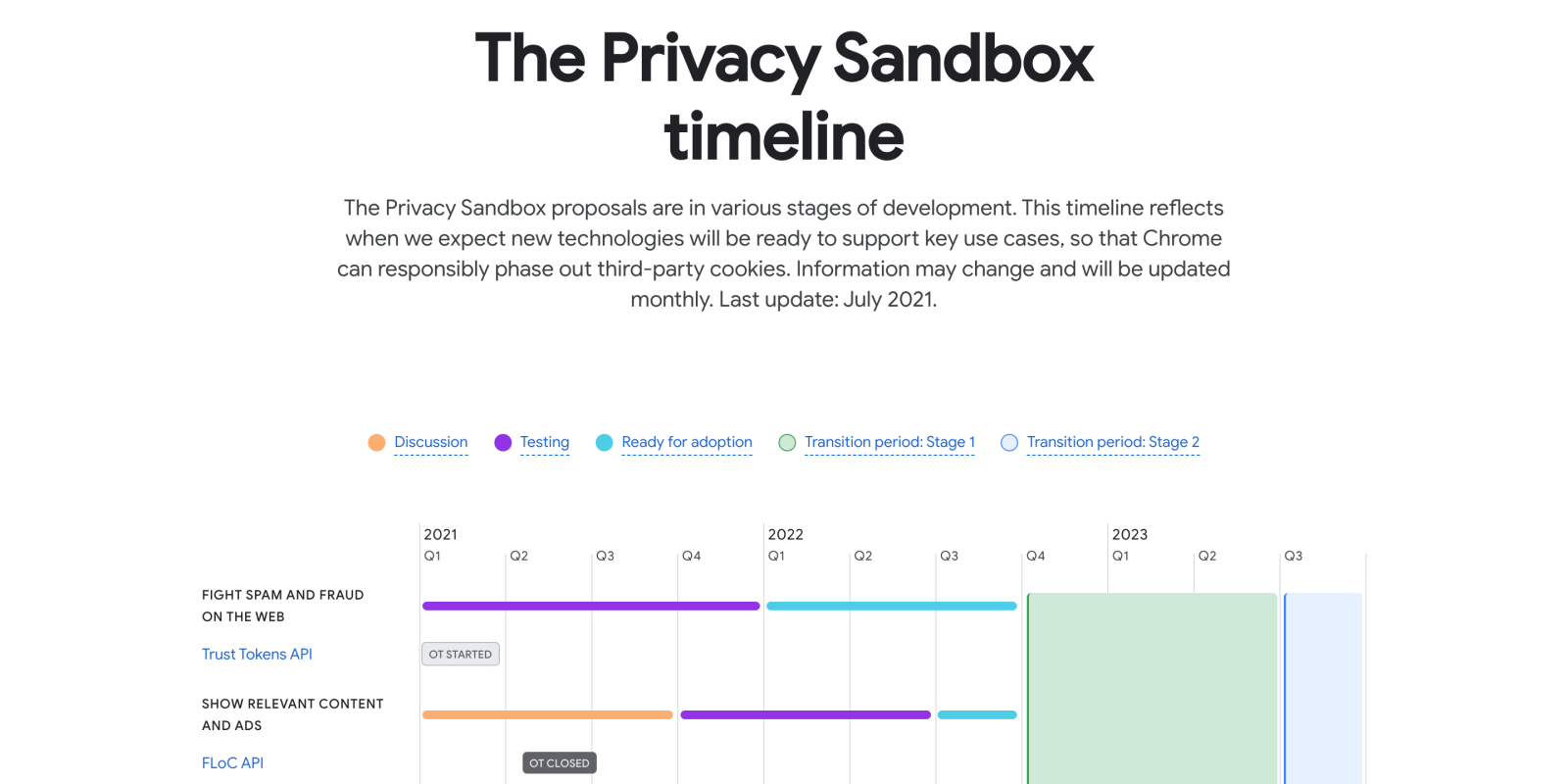 Last month, Google announced that it would delay Chrome’s plan to phase out support for third-party cookies. As part of that, the company provided more details about the Privacy Sandbox and has today released a rollout timeline.

As promised, the company now has a detailed schedule. Google was originally planning to phase out third-party cookies within two years of its 2020 announcement. That’s now set to take place over a three-month period, starting in mid-2023 and ending in late 2023.

Google breaks down the Privacy Sandbox timeline into four components, with the relevant APIs listed underneath:

Fight Spam And Fraud On The Web

Most are currently in the “Discussion” phase, save for combating spam/fraud. The next steps are “Testing” and “Ready for adoption,” with Google marking when Origin Trials (OT) for individual APIs have started in the browser.

Google wants to have APIs that fall under those four areas in place before the transition period and will not start the wide rollout until those technologies are “ready for scaled adoption.” If everything goes according to plan, Stage 1 of the transition will start in Q4 of 2022 and run until Q2 of the next year. During this time, Google will monitor adoption as publishers and the advertising industry migrate. The phase-out of third-party cookies in Chrome will occur during Stage 2 in Q3 of 2023.

The Privacy Sandbox is also meant to address covert tracking techniques, but that’s outside the four categories. SameSite Cookies, User-Agent Client Hints API, and HTTP Cache Partitioning have all launched at scale. Scaled availability of DNS-over-HTTPS is planned (at the earliest) for the second half of this year, while the second half of 2022 will start to see WebID API, User-Agent Reduction, Gnatcatcher, and Origin-Bound Cookies. Lastly, a Privacy Budget is targeting 2023.

The Privacy Sandbox timeline will be updated by Google monthly, while there’s also a FAQ at the bottom of this page. Meanwhile, Chrome 92 is in the process of rolling out a FLoC setting to the existing Privacy Sandbox preferences page.