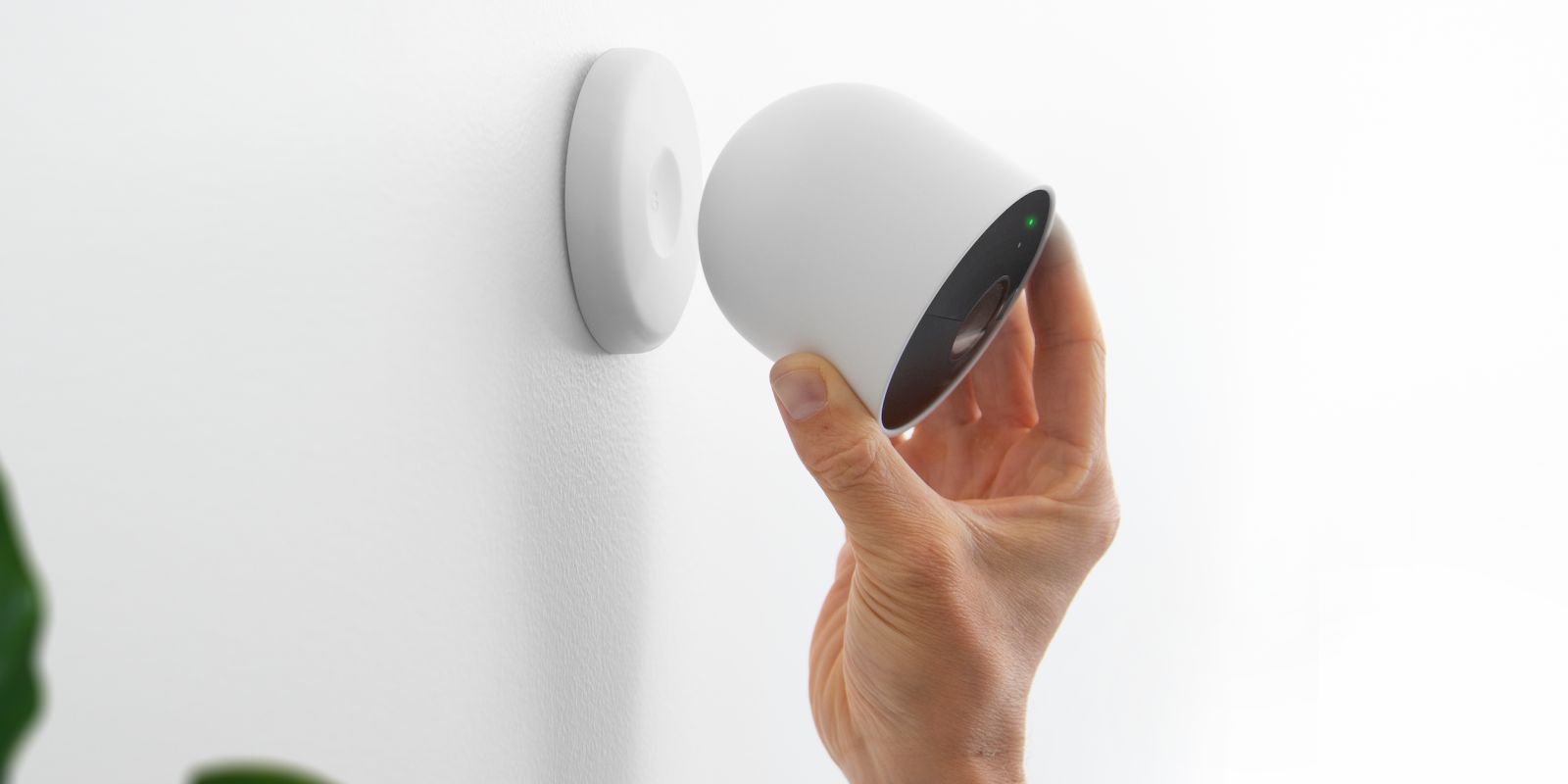 With the current lineup featuring a model that dates back to 2015, Google’s security cameras are in sore need of a refresh. That call is now being answered with a new Nest Cam line that’s comprised of three devices.

The flagship, as well as primary model, of the line is called the “Nest Cam (battery).” Visually, it’s not too different from the IQ line that came before, but everything is housed in a self-contained, cup-shaped package that’s available in (Snow) white. Made of 45% post-consumer recycled plastic, Google touts IP54 protection that can withstand the elements. As such, there are no indoor and outdoor models like before, just one unit that works everywhere.

The 2-megapixel sensor records up to 1080p video at 16:9 aspect ratio and 30FPS with HDR. There’s 6x digital zoom and Night vision powered by six high-power 850nm infrared LEDs that can provide up to 20 feet of illumination. Other specs include a “high quality” speaker and microphone that allows for “full-duplex” 2-way audio with noise cancellation.

Out of the box, Google offers three hours of event video (clip) history that does not require a subscription. Nest Aware, unchanged from before, can expand this to up to 60 days on the “Plus” tier. The most expensive membership also allows for 10 days of 24/7 continuous video recording if it’s connected to a power source. An LED status light indicates when footage is being uploaded to Google, while the motion sensor has a 110° horizontal field of view up to 25 feet.

Thanks to on-device machine learning and a TPU chip, the Nest Cam can also recognize people, vehicles, and animals, as well as user-set activity (important areas) zones, for free. Meanwhile, paying for Nest Aware gives you familiar face detection. Google touts improved algorithms that will mean less false detection alerts, while local processing improves speed and privacy. Compared to the Nest Cam IQ, it can run 2x more pixels at twice the frame rate. This is made possible by training on 40 million images including 25 million synthetic ones (in virtual environments), thanks to Unity.

As the name implies, the Nest Cam has a built-in rechargeable (6 Ah, 3.65V lithium-ion) battery that allows for wire-free installation. Estimated battery life with event-based recording is as follows:

The power source, combined with local storage, means you get an hour’s worth of video when Wi-Fi is offline. This translates to an estimated week’s worth of clips that will upload when the connection is regained.

In the box, Google includes a 1-meter charging cable with pogo pin connector and 7.5W USB-A power adapter. Weatherproof cords rated for outdoor usage is sold separately at 5- ($34.99) and 10- ($39.99) meter lengths. Similarly, a Nest Cam stand ($29.99, seen above) is available for purchase, but Google does include a two-screw wall mount in the box. Google is also selling a third-party solar panel for power ($59.99) and anti-theft mount ($14.99).

The Nest Cam (battery) costs $179.99 and will go on sale August 24 at the Google Store and other retailers in:

In the future, Google will be selling what’s essentially the same Nest Cam — but wired only — with two floodlights at $279.99. It’s physically quite substantial and leverages ML to turn on when activity is detected. There are different variants for the US and EU.

Rounding up Google’s smart home lineup is “Nest Cam (wired).” It’s smaller and cheaper than what’s launching this month. At $99.99, it lacks a built-in battery and must always be plugged in.

Meant for indoor usage, there’s a permanently attached base, though wall mount options are available. Nest Cam (wired) also has on-device storage for local backup when Wi-Fi is lost. Google considers this to be a second-generation of the original Cam Indoor.

Google’s cheapest camera — in the mold of the new Nest Thermostat — will be available in four delightful colors: Fog (light blue), Linen (beige), Sand (light pink + wooden base), Snow (white). Like the floodlight model, there is no launch date yet.