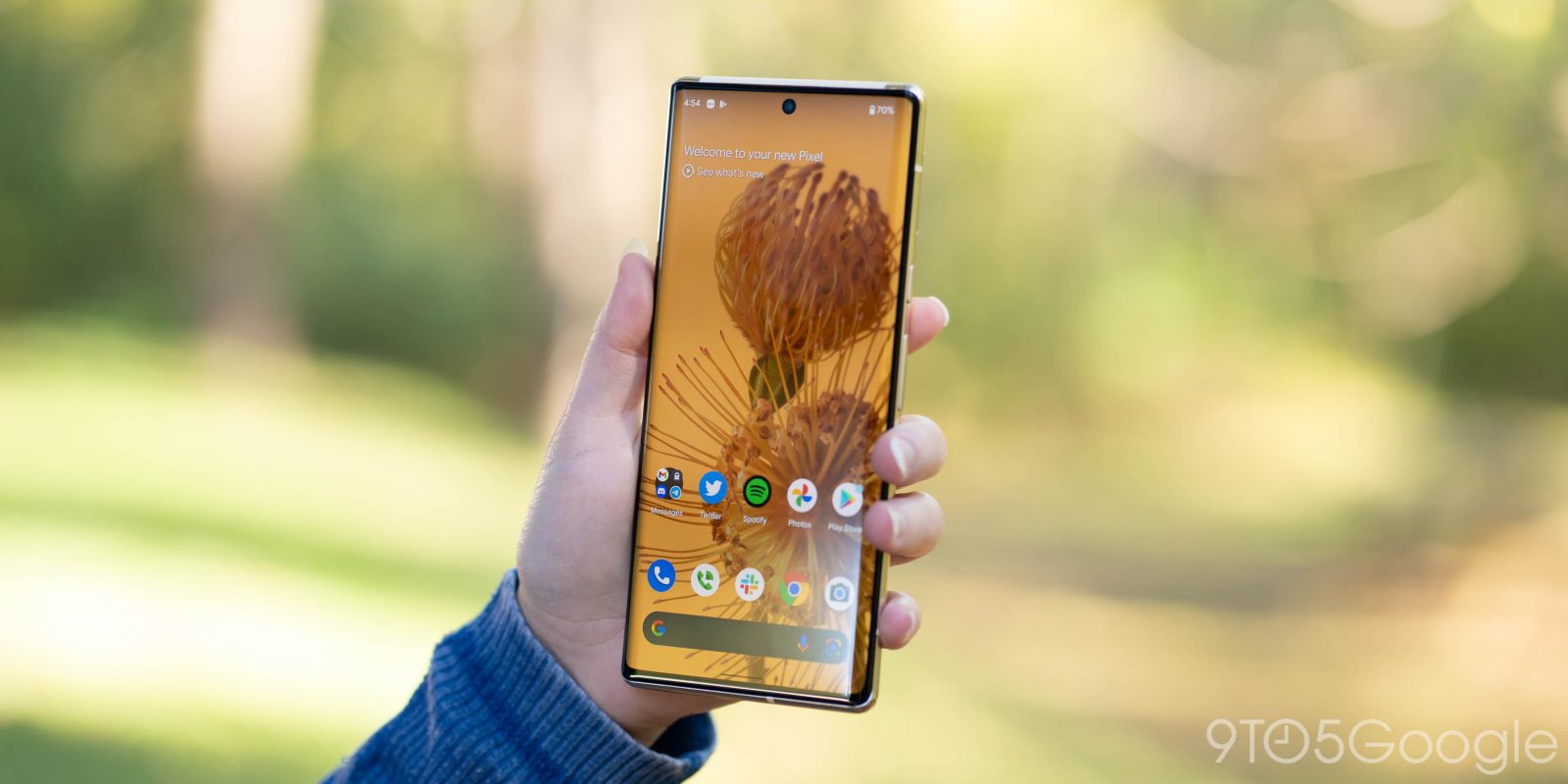 At the Pixel Launch Event, Google fully detailed the Pixel 6 Pro after weeks of pre-unveils and teases. All the expected flagship specifications were confirmed, while pricing and availability is now official.

The Pixel 6 Pro is physically defined by its 6.7-inch — 19.5:9, 1440×3120, 512PPI — “Smooth Display” that offers a 120Hz refresh rate, while LTPO (Low-Temperature Polycrystalline Oxide) technology allows that to drop to 10Hz for battery conservation. Up from 90Hz on the Pixel 5 and smaller Pixel 6, Google touts “more responsive gaming and scrolling.” The OLED panel curves into the left and right edges, and is protected by Gorilla Glass Victus for 2x more scratch resistance compared to Gorilla Glass 5 on last year’s Google flagship.

Made of polished alloy, the frame has several color-matching antenna lines including a top (plastic) strip, while the power button and volume rocker are at the right. The SIM card slot is on the left and not too apparent. The Pixel 6 Pro is quite tall at 6.5 inches (163.9mm), while the width is 3 inches (75.9mm) and 8.9mm thick. It weighs 210 grams (7.4oz) — approximately 14% of that is attributable to recycled aluminum, with the Pixel 5 coming in at 151g and the 4a just 143g.

That last lens gives you 4x optical zoom, while (digital) Super Res Zoom lets you go to 20x. It, along with the wide, has optical and electronic image stabilization. Lastly, there are laser detect auto-focus (LDAF) and Spectral and Flicker sensors.

The new main sensor is larger than past Pixel phones and captures 150% more light for finer detail, richer color, and more accurate Night Sight. The 11.1MP front-facing camera (f/2.2) is centered instead of in the top-left corner with a 94-degree field of view that’s just 3 degrees shy of the Pixel 3’s ultrawide.

On the video front, you can record up to 4K60 on the rear camera, while 4K30 (and 1080p60) is available for the front-facer. The marquee feature is live HDR+ video for rich colors, better night time shooting, and tone mapping.

Compared to the Pixel 5 (Snapdragon 765G), Google touts up to 80% faster performance. The chip makes possible translations of signs (through Google Lens) and live video captions in up to 55 languages without an internet connection. There are also speech recognition and dictation enhancements.

The typical 5,003mAh battery (minimum 4,905mAh) supports 30W USB-C charging in a big jump from 18W previously, though Google is selling the new power brick (1-50% in 30 minutes) separately. There’s also 23W wireless charging with the Pixel Stand (2nd-generation), which features fan cooling. Up to 12W is supported on other Qi-certified EPP chargers. Google officially says the Pixel 6 Pro lasts over 24 hours on a charge. Like last year, reverse wireless charging with Battery Share lets you give headphones a top-up when you’re on-the-go.

Other specs include an optical under-display fingerprint sensor (UDFPS), Wi-Fi 6E, Bluetooth 5.2 with dual antennas, NFC, stereo speaker arrangement, three microphones, and ultra-wideband (UWB) for accurate ranging and spatial orientation, though the functionality is not enabled at launch.

There’s Android 12 with Material You and Dynamic Color theming based on your wallpaper. Meanwhile, At a Glance in the top-left corner of the Pixel Launcher will continue surfacing events and reminders, but in some cases will show your actual flight boarding pass, as well as third-party app integration. Meanwhile, the Pixel 6 Pro will see five years of security updates.