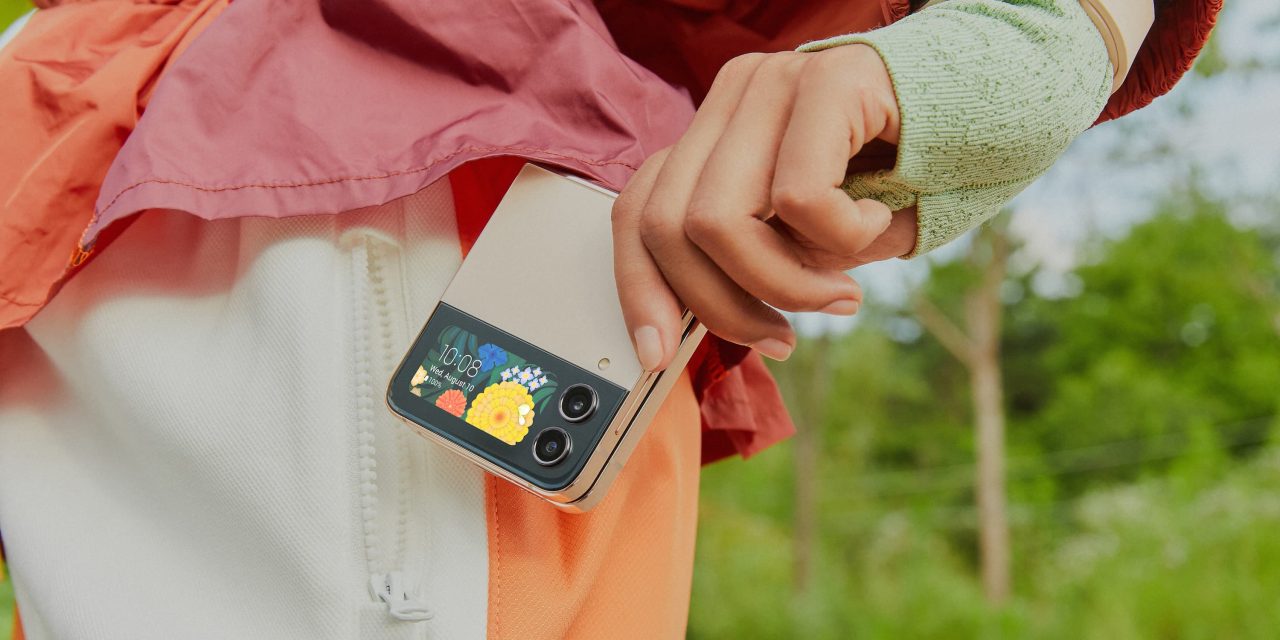 The Galaxy Z Flip lineup started as Samsung’s second foldable form factor – a clamshell design that acts a lot like a traditional flip phone but hides a full modern smartphone within. The Galaxy Z Flip 4 follows that same pattern, but with some excellent refinements.

Looking first at the hardware, the Flip 4 shares its design with the Flip 3 in most areas, though with some key improvements.

When closed, the Flip 4 is shorter and narrower, which means it should fit in small spaces even better than its predecessor. The device also has flatter sides which is nice both aesthetically and in the hand. All primary colors are also using matte glass this year – you’ll be able to buy the Flip 4 in Bora Purple, Graphite, Pink Gold, and Blue. Samsung is also bringing back the Bespoke Edition with up to 75 color combinations, including red, green, white, and more.

You won’t find any changes on the outer display of the Flip 4 – it’s the same tiny 1.9-inch panel that’s used for the time, notifications, select widgets, and quick selfies. There are some improvements to “Quick Shot” this year, though, including the ability to take Portrait shots and optimization for Instagram, Facebook, and WhatsApp. There’s also a new “FlexCam” mode.

The story is largely the same on the inside, with the Flip 4 retaining a 6.7-inch 120Hz display under ultrathin glass. Samsung does claim the inner glass is stronger this year.

The Galaxy Z Flip 4 is powered by the Snapdragon 8+ Gen 1 which is paired with 8GB of RAM and either 128GB, 256GB, or 512GB of storage. Android 12 with One UI 4.1.1 is available out of the box. As with other Samsung devices, the Flip 4 will get up to four years of major Android updates and up to five years of security patches.

Circling back to the cameras, you’ll find a similar 12MP primary and 12MP ultrawide setup here, with a 10MP selfie camera in the display. But the primary sensor has been upgraded and now captures 65% more light.

The biggest upgrade by far, though, comes in the battery department. The Galaxy Z Flip 4 now features a 3,700 mAh battery, up 400 mAh from the Flip 3. That should expand the endurance dramatically, and the new 25W wired charging speed will lead to a faster recharge. Samsung says users can expect around 50% in 30 minutes. Wireless charging is still limited to 15W.

Pricing for the Galaxy Z Flip 4 lands at $999, unchanged from the Flip 3. The phone launches on August 26, but pre-orders are open now for all colors and storage options. The Bespoke Edition is available exclusively from Samsung.com.