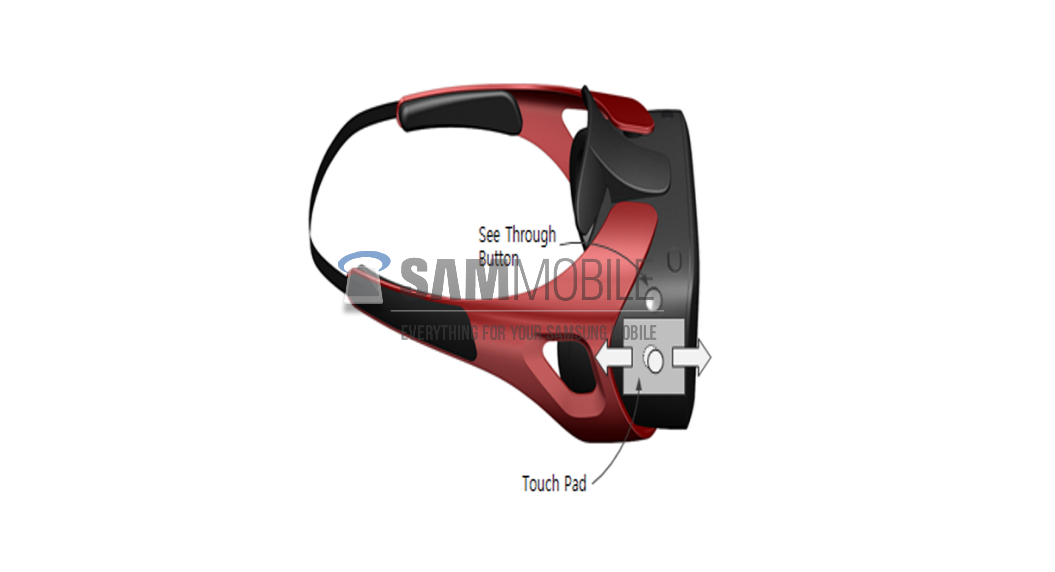 We told you in May about a device that Samsung is purportedly working on to be its entrance into the currently-Oculus-dominated virtual reality market. Today, we now have a glimpse at a couple images that claim to show the upcoming device/accessory in the flesh (via Sammobile), and with IFA just around the corner, the leaks come at a pretty appropriate time.

Samsung is partnering with Oculus on the software side of things, and it appears that development of the product is coming along quite nicely on the hardware side. The first image, as you can see above, appears to come from some kind of first-use documentation and points out a couple of the device’s main hardware features. On the right side of the hardware there’s a “See Through Button” and a “Touch Pad.”

Notably, this headset is much more like Google’s “Cardboard” project than a full-fledged VR headset like the Oculus Rift. Users will supposedly be able to dock a Samsung Galaxy smartphone via USB 3.0 (and probably only a Samsung smartphone, sadly), and the virtual reality effects will be achieved by way of the sensors that said phone already has built-in. The branding of the device also seems to have been confirmed with this report, with the above image referring to the device as the “Samsung Gear VR.” The device will likely be introduced at a relatively low cost due to the fact that it will be little more than a shell, and will be notably more comfortable than the comparable “Cardboard” device due to what looks to be a large amount of cushioning.

While the hardware is being built completely in-house by Samsung, the software is being done in collaboration with Facebook’s Oculus. Much like the company did with its Gear line of smartwatches, Samsung will be dedicating an entire section of its own app store to the headset, with software like Theatre, 360 Player, and Gallery starting the platform off. All of this is supposedly going to be launched at IFA 2014 alongside the Galaxy Note 4.